We all love the holidays,right?  Time to spend time with the family,friends and co-workers. Every holiday is someone’s favorite….be it Halloween,New Year’s Eve,St. Patrick’s Day…..
Anthology films are tricky,real tricky. Putting together various stories around a central theme can work (the classic Trilogy of Terror was built around its star,Karen Black) but most times these films end up bumpy and uneven.
The last anthology film the cheetah and I watched, “V/H/S” was such a film…it had one great story and the rest were so-so. Most films feature anywhere from 2-4 stories and here “Holiday”shows its ambition by featuring a staggering EIGHT in a film that only runs for 1 hr 34 minutes. That is a lot of stories in not so much time.

The best story was “Christmas” which was written and directed by one of my favorite directors,Scott Stewart (Legion).  The story is a old chestnut,Seth Green plays a dad trying to get the “IT” gift for his child,in this case,a VR visor that everyone wants. It’s Christmas’s Eve and a store is holding a copy for him but when its sold before he gets there….how far he goes to get it reveals a dark side that not only he has but also someone very close to him as well.
Despite the plot,the execution is well done and both Green and Clare Grant,who plays his wife are very good in this darkly funny story.

But the BEST story for me was “New Year’s Eve” which written by Kevin Kolsch and Dennis Widmyer and directed by Adam Egypt Mortimer. I wasn’t expecting much for this story because Kolsch and Widmyer had also written the worst story in their on “Valentine’s Day” which kick started “Holidays” in a bad way. So to see these two create a kick ass story to end this film was a pleasant treat.
In “New Year’s Eve” a serial killer named Reggie who preys on lonely hearts (Andrew Bowen) finds his perfect match in a most unexpected way. Mortimer ratchets up the tension up to 10 very quickly as we ride along with Reggie who is in search of a love connection on one of the most romantic days of the year. After all,serial killers need love as well…..right? 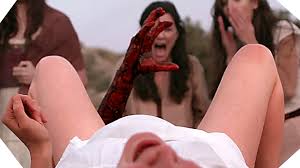 I enjoyed two other stories….”Father’s Day” which was written and directed by Anthony Scott Burns and features Michael Gross as a father looking to reconnect with a long lost daughter. I also thought “Easter” was decent,despite featuring a threadbare plot of a girl who should have listened to her mother about going to sleep instead of trying to see the Easter Rabbit.

The rest of “Holidays”…. was not very good,while I enjoyed Ruth Bradley’s turn as a teacher in “St. Patrick’s Day”,the story was trite and boring. “Halloween” was a complete waste of time as Kevin Smith continues to destroy his credibility as a decent director by pushing his daughter who has no acting talent in her body. His take on Halloween is just a pile of shit and the non-acting in it will have you pushing fast forward on the remote.

Like I mentioned,anthologies can be tricky….but overall,this is worth a look at and both the cheetah and I give it a thumbs/paws up on it. I just wish the film makers had skipped Valentine’s Day and Halloween……

You can pick up a copy of Holidays here on Amazon.