We have been on a really good streak in finding great movies at my local library. For such a long time,there wasn’t very much being offered at the little bookstore but ever since their remodel,things have really changed. The amount of DVDs and Blu Rays have increased but it’s quality of what is donated that is really standing out.
Newly arrival day is Tuesday at 2 pm. But several dealers pay a 50.00 a year to be able to have first crack at the new titles. They show up and look for hard to find books. The general public is allowed in at 3 pm.

So a couple a weeks ago I popped up at 5 pm and was sort of surprised to see how busy it was. I thought the dealers would be long gone and it would be quiet,it wasn’t. It was quite busy with several people shopping. I waited patiently and then a opening popped up. So I took a look and was so happy to so many great titles still on the shelf,including two IFC Film titles.  I absolutely love IFC titles and I always grab them when I see them in the wild. One of the titles I picked was “October Gale” and this was a interesting little film.

October Gale is set in Canada and opens with Helen Matthews (Patricia Clarkson) getting ready to head to a isolated cabin she shared with her husband. She tells her son where she is going and we find out that her husband has died and she is going to clean the cabin. Despite his offering to help,Helen wants to do this alone. 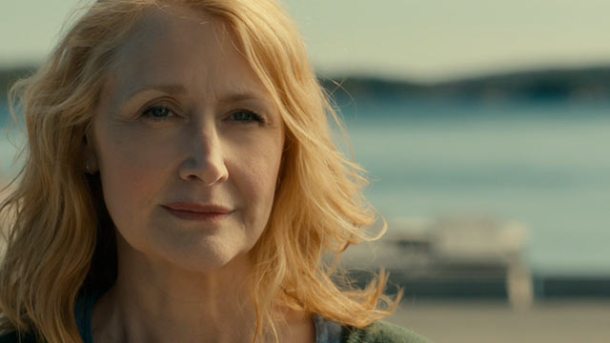 She drives to the marina and takes their boat to the little island where the cabin is.
Helen is at first overwhelmed at the sight of the cabin but starts to clean,slowly at first and then starting to pick up steam. She tries calling her son but there is no service on her small island.
You can see the cabin was lived in and had a lot of good memories within. Helen opens the fridge and knows right away she is going to have to go back into town.  As she starts to clean again,we see Helen having flashbacks to her life with her husband James (Callum Keith Rennie) and their loving relationship. As Helen works harder and faster,her emotions rush to surface and she is overcome by her memories.
She decides to head back to town for groceries and other items but on the way in,her boat breaks down and she needs help getting back to the island. 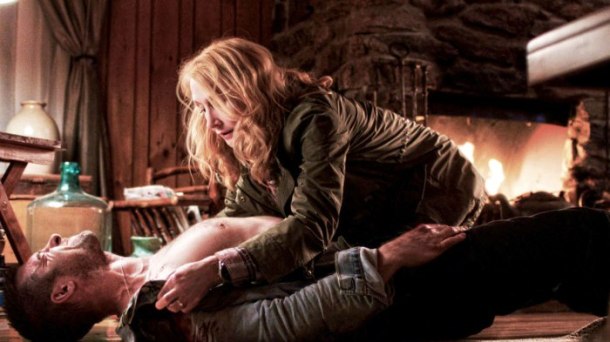 With the weather getting nasty,Helen decides to take her little dinghy on the lake,we are sort of confused by this,it isn’t a smart idea and we are relieved when she turns around.
It’s dark and raining by the time she gets home and she sees a unknown boat at the dock with what appears to be blood on it.
Helen enters the house to find Will (Scott Speedman) lying shot in her living room.  We discover that Helen is a doctor and she removes the bullet lodged in his left shoulder.
It’s a miracle that he made it as far as he did in such a small boat,in a nasty storm and suffering from blood loss. It turns out that Will was just released from jail after serving hard time and someone was waiting for him to get out. There is some unfinished business that has to be settled. 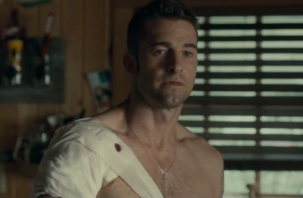 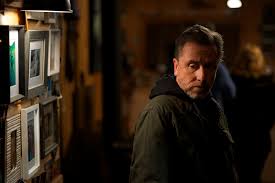 But who shot him and for what reason? There seems just a tiniest of sparks between Will and Helen,is it real or wishful thinking?  Who is Tom (Tim Roth) and more importantly,whose side is he on?

Though “October Gale” is advertised as a thriller,it really isn’t. It is like floating in a inner tube on a lake in a warm summer day,there are no thrills here….only two ways of  how people react to loss,in Helen’s case,her husband poor choice that cost him his life. Her guilt of what led to that choice and her fight to stay alive in the now.
The first 30 minutes was like looking in a mirror for me,everything Helen went through,every emotion and memory,I knew what she was feeling. Clarkson,it seemed to me,was tapping into a personal experience to really drive Helen’s grief home. Writer/director Ruba Nadda’s script was very good here. There is a scene where Will and Helen are looking for something to help them stay alive and they enter James’s study. Helen is frozen because of what it represents and she is lost. It’s a powerful moment where grief is shown to overcome life and it rings so true.
Speedman and Roth are both solid as Will and Tom but this movie is Clarkson’s and she is wonderfully moving as Helen. One wishes that Nadda had scrapped the “thriller” part and just focused on Helen’s journey after James death. It would have been the better choice.
Did we like this movie? Yes and no….the cast did a good job with what they were given with and Nadda’s movie is beautiful to look at. The script,especially Tim Roth’s part,could have been much stronger in our opinion.
But this is worth looking at and while I highly recommend it,the cheetah gave it a paws down for the lack of suspense and tension.

“October Gale” has a run time of 91 minutes and while unrated,should be considered a “R” due to language.  The only special feature is the film’s trailer.
You can buy this film by going to IFC Films.

How many of you have watched a IFC Film release? Which one has been your favorite?
Drop a comment below…