Looking outside at a very cold but sunny day. I see a orange striped cheetah tail as Paladin is chewing on treats.
But he also got tired of me binge watching “How I Met Your Mother” and dragged me back to the basement to pick out a new movie to review. I was surprised when he picked “Love Happens” because we had watched it before.
It did make a impression on us both however and since cheetah picked it out,we’re reviewing it.

“Love Happens” is a more well acted film then a good film. The performances for the most part are really good but the plot just sinks it with its crater like holes.
Aaron Eckhart’s Burke Ryan is a life coach who has basically made a living off of his wife’s tragic death 3 years prior. He has written a best-selling book,flies all over the country giving seminars and even has a catchphrase (A-ok!).

When he arrives at the last place he wants to be in,Seattle,Burke is poised to go national thanks to the hard work of his agent/manager Lane “Goddamn”Marshall (Dan Fogler).
During a four day weekend,Burke will give a seminar,met with several important people in branding and television,deal with his wife’s parents about their daughter’s death and still have time to fall in love with the quirky Eloise (Jennifer Aniston).  The seeds are sown for a very interesting story except for that ONE same thread…..which is instantly given away when Burke’s father-in-law (Martin Sheen) comes to a book signing and tells Burke “to quit lying to himself”. Once this scene happens,the whole movie falls apart and all that we’re left with is to watch the performances and this is where “Love Happens” shines brightly because the whole cast sparkles.

Aaron Eckhart is one of my favorite actors,I can’t think of a single movie where he hasn’t delivered a top-notch effort. He can play any role extremely well and there is really just a handful of actors/actresses who can do that.  His Burke Ryan is a tormented man but its not his wife’s death that is slowly killing his spirit,he knows what he needs to do but he is stuck in the trap of his own making.

John Carroll Lynch plays Walter,one of the folks attending the seminar. Walter is wracked by grief and self-loathing,when he wants a refund because he isn’t convinced that he’ll find his answers,Burke takes a special interest in his case and works very hard to help him.
Lynch,who rose to fame on “The Drew Carey Show” and is primarily known as a comedian,steals every scene he is in. I thought his Walter had an amazing backstory and you sort of wish the script had spent just a little more time with him. 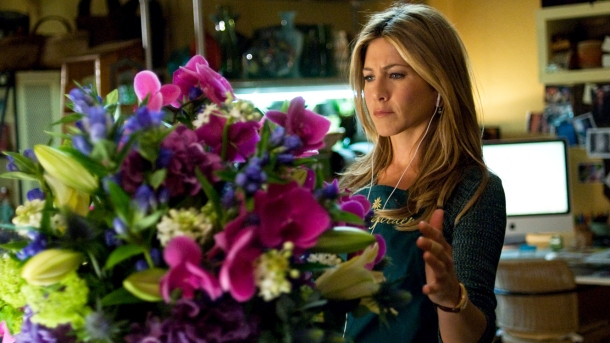 Jennifer Aniston as Eloise was quirky and spunky as the florist store owner who likes Burke but because of her previous bad luck in relationships is wary of anyone new and especially as one as damaged as Burke is. Her performance is restrained and Eckhart and her make a good looking couple on screen.
When I watched “Love Happens” the first time,I really disliked the character of Lane Marshall. But after watching it again….I saw Dan Fogler’s performance in a different light. His Lane Garrison is really Burke’s only friend. 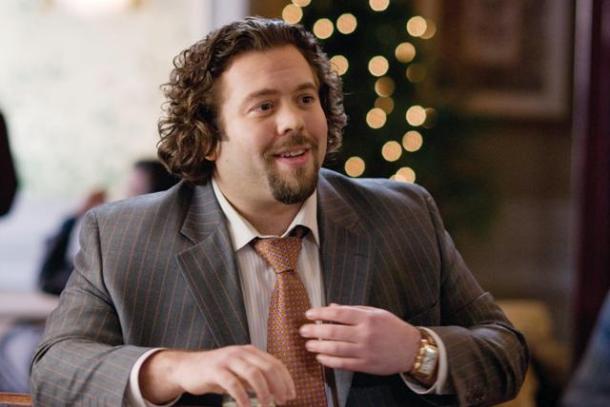 He knows his past two years of setting Burke up to become a household name will help Marshall,for Burke Ryan,the next step up could lead to his self-destruction unless Ryan can come to terms with his wife’s death. He knows Eloise is what Burke needs in his life,even if the two don’t really understand it as of yet.  His brashness covers a compassionate heart as he is willing to risk his friendship with Burke in order to save his friend’s life. 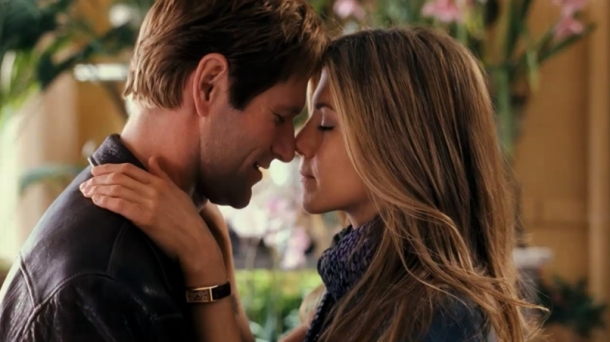 While I think the story is weak,the part of handling loss and grief ring completely true.
Screenwriter/director Brandon Camp and Mike Thompson show how damaged Burke is.
Even after years,you can see while Burke is eager to help others,when it comes to himself…all though platitudes that he shares with other people in order to help them just ring hollow. I also will commend the script in laying down that Burke was a long way to go,even with the support of Lane and Eloise.
So while “Love Happens” is an uneven film,it’s one that we both think you should check out as the performances are outstanding enough to even out the gaping plot hole.
“Love Happens” is rated PG-13,has a run time of 1 hr and 49 minutes and has a Director’s commentary in the special features section.

This movie was put out by Universal Pictures which means you should be able to order it on Amazon or find it on Ebay quite easily.

What do you think? Can performances always overcome plot holes in films or does a story have to be spot on in order for the performances to count?