It has snowed last night but this might be winter’s last hurrah as we expected to hit the 50s come this weekend. We’re expecting the snow to melt as rain is expected. The winter has pretty much followed the same pattern,one huge storm and then wait for spring. The deep freeze has been longer then normal however.

That makes for great movie/TV show watching weather and the cheetah and I did just that with watching all three seasons of “Justice League: Unlimited” thanks to Amanda Waller’s most trusted aide who also happens to be our street wise informant at Warner Brothers Archive.

In 2001 Cartoon Network debuted “Justice League” and it ran for two seasons to great acclaim. Many stories were stretched out for 2-3 episodes and featured the seven main characters- Batman,Superman,Hawkgirl,The Flash (Wally West),The Martian Manhunter,Wonder Woman and Green Lantern (John Stewart) along with several guest stars.
(The cheetah and reviewed the pilot episode arc which you can read here.)

Each season ran for 26 episodes but in 2004 Cartoon Network and DC decided to replace it with a slightly different idea and thus “Justice League: Unlimited” came on the air in 2004. The big difference was the League was MUCH bigger,besides the original seven members,up to 60 different superheroes were based on the Watchtower which was established in “Justice League”. JLU wasn’t so much a “new” show as much as it was an expansion show. Many story lines that started in the first series were picked up in JLU.
What changed was the fact many episodes didn’t even feature the original members at all,putting the spotlight on many other heroes like Black Canary,Vixen,The Question,Vigilante and Green Arrow.

Truth be told,in many ways,it made the show much more fun because you didn’t know who would be featured and the part they would play.
Where in Static Shock the stories were unexpectedly deep and somber for a children’s cartoon,the Justice League series were aimed at older viewers and thus the stories were a lot more mature and it was intended to be that way.
The first season of 13 episodes saw many connections to Justice League being connected as well as many introduction adventures that showcased new heroes for viewers who don’t read/collect the comic books. For the most part,these were stand alone stories except for a two parter “The Once and Future Thing” which had Batman,Wonder Woman and Green Lantern chase Chronos back through time in part one. There they meet the Old West version of the Justice League in Jonah Hex,Bat Lash,El Diablo and Ohiyesa “Pow Wow” Smith. After defeating a local rancher who has captured Chronos and using his time device to bring high tech weapons to the past,the modern League members prepare to take Chronos backs when he tricks Batman(!!!) and escapes into 50 years into the future. The game afoot as Batman,Wonder Woman and Green Lantern once again give chase. The term “future shock” is truly defined as the three are indeed shocked by what they find. 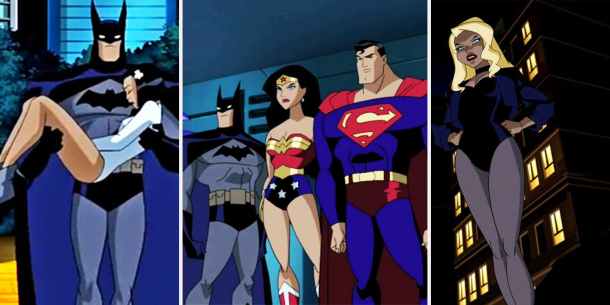 In “Ultimatum” we see the first signs of Project Cadmus,a secret US Government program designed to defend the earth against the Justice League after learning about another world’s JL who went rogue and called themselves “The Justice-Lords”.
Cadmus has cloned their own superhero team,the Ultramen, but because of design flaws,they have a very short life span and will die,only to replaced by yet more clones.
In the second season,Project Cadmus is brought to light in a arc that runs through out the season as the League faces its greatest fear,that they will go rogue.
This is brought home when Batman confronts the leader of Cadmus,Amanda Waller,who shares her knowledge of the Justice Lords and why Cadmus was created.
Batman acknowledges her fears and he begins to withdrawal from the League.

When The Question finds out about what happened with the Justice Lords,which included Superman killing President Lex Luthor,he becomes greatly concerned because the same timeline is happening here as well. Luther has been pardoned and is now running for President.
In “Question Authority”,The Question decides the only way to stop the future that will destroy our world is to kill Lex Luthor. But Lex badly beats him and captures him. Cadmus has him and is torturing him to find out what The Question knows. When Superman and disgraced former member The Huntress free him,Captain Atom,who has been recalled to active duty in the US Air Force,demands the return of The Question. (Captain Atom didn’t know about the torture). This leads to a terrific battle between two Justice League members in which Superman wins and he isn’t happy about it.

My favorite episode of season two was “Task Force X” which basically was a “Suicide Squad” type of adventure. It is primarily seen from the POV of the super villains,Deadshot,the Clock King,Plastique and Captain Boomerang along with Rick Flagg.
They are sent to the Watchtower to steal some mystical armor and despite the best efforts of the shocked Justice League,they indeed do so. There are tremendous fight scenes in this episode as well as the disturbing idea that the Watchtower and the hundreds of human staff members can no longer be completely trusted,weakening the League’s effectiveness.

DC thought the show was going to cancelled and they decided to end it and the DC animated universe that was created with 1992’s “Batman Beyond” by featuring Terry McGinnis having a talk with a elderly Amanda Waller about the legacy of being Batman.
It is shown after Cadmus was exposed and Waller was being used that she came to her senses and worked with the Justice League. She and Batman even became respected colleagues and she was the liaison between Government and the League.
But Cartoon Network surprised DC by ordering a third season of the show. So the last 13 episodes featured the Justice League pretty much facing off against the Legion of Doom for the whole season.
There are a few outstanding episodes in the last season,”Chaos at the Earth’s Core”,Green Lantern,Supergirl,Stargirl and S.T.R.I.P.E. are drawn to Skartaris where they meet Warlord and help him defend Skartaris’s main power source from the Legion of Doom. When the source is revealed to be a massive piece of kryptonite,the question of how do you defend something that could kill a fellow League member? And when Metallo and Silver Banshee join the party,all hell breaks loose. 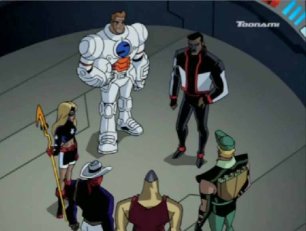 In a nod to the classic superhero team,Seven Soldier of Victory, “Patriot Act” sees General Wade Eiling,who worked for Project Cadmus,steal a serum that created a Nazi super-soldier called “Captain Nazi”. He takes a overdose of the serum and mutates into a monster superhuman. He does so in order to protect the United States from “metahumans”. He heads to Metropolis to find Superman not knowing he is off the planet and that a parade that he usually appears in has several Justice League members taking his place. 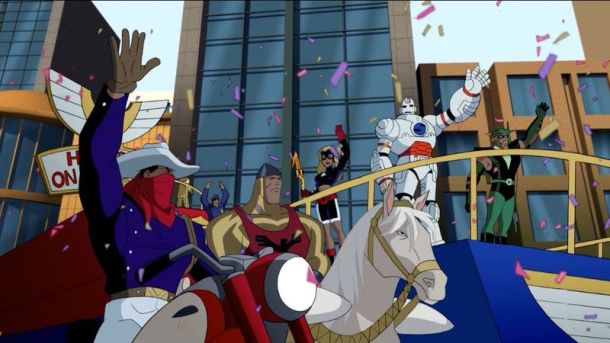 The heroes Green Arrow,Stargirl,S.T.R.I.P.E.,Shining Knight,Vigilante are on a float and while the crowd isn’t overly impressed ,that changes when the super strong Eiling shows and starts a rampage. These heroes are not super powered naturally and while they battle valiantly,they have no hope of defeating Eiling. Green Arrow calls for reinforcements but only get his one sidekick Speedy and the Crimson Avenger who more along the lines of Batman. 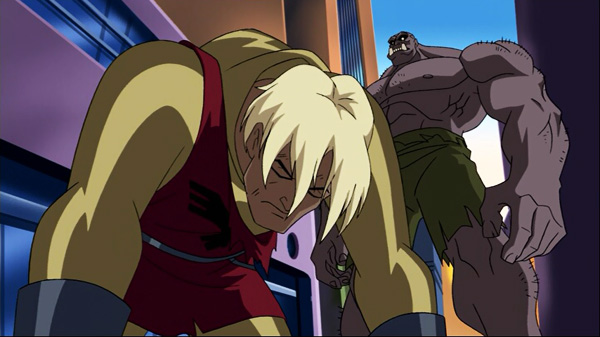 Shining Knight goes nose to nose with the monster and is about to be killed with several citizens place themselves in harm’s way in order to stop Eiling who is saying he is the only to protect them from “super powered beings”. When the citizens point out that Eiling himself is the only super powered one in this battle,he stops his attack and leaves.

This is a great series and I’m sort of at a loss why Cartoon Network cancelled it. I do remember when it on and that a LOT of folks really loved the show and following the great run of the Justice League series,it seems like a no brainer to have continued it.
The secret of course to the success of the DCAU is voice director Andrea Romano and the A-list voice talent she was able to attract.
I am in awe of the actors Romano was able to bring to the series and what is amazing is how seriously the actors/actresses played their parts. There is some real emotion shown here and no one does any hokey camp. 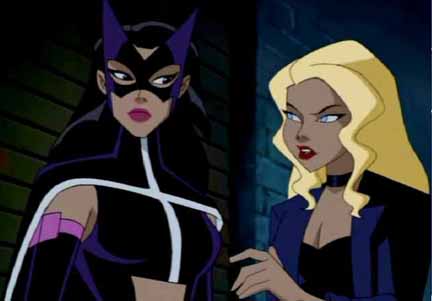 Some of actors have come to own their characters such as Kevin Conroy as Batman,Jeffrey Tombs as The Question and Clancy Brown is truly Lex Luthor. I like how Brown has portrayed his Lex more as a anti-hero then a straight out super villain,its a interesting take on Lex,
The writing is also superb and well thought out and also very brave. To take such established icons and then  plant the notion that they too,have their limits,flaws and tempers is not exactly the norm you see on a TV show and while comics books do at times show these traits in heroes,to HEAR them and see them in action is quite human.
Showing characters in relationships,being asked to perform the unthinkable and as noted,even willing to commit murder is not thing you see in superhero shows.

“Justice League: Unlimited” ran for 3 seasons and consisted of 39 episodes.
Special features include commentary on two episodes,a panel discussion of Cadmus Exposed hosted by Mark Hamill himself and also a panel of the creative forces behind the show,Dwayne McDuffie,Bruce Timm and James Tucker.

The cheetah and I loved the hell out of this series and we’ll be  reviewing “Justice League” in the near future. This release gets two thumbs/4 paws and a tail straight up.

You can buy “Justice League: Unlimited” at the Warner Brothers Archive site.

Have you watched either series? If so,share your thoughts,favorite episodes and wonder why The Spectre never made a guest appearance.