*Not safe for work

I was talking with a fellow movie buff/critic last night on Twitter. He was asking if a director had contacted me about screening his film,he had introduced us and said that this director’s film would get a fair and honest review.
My friend asked if the director had contacted me and I said “not as yet but I’m sure he is swamped”. I really wanted to see the film since it had actress Devanny Pinn in a small role. I follow Devanny and her husband,director Brandon Slagle on Twitter. They are an adorable looking couple who work very hard on their careers.
In my “watch for” section in my brain,I’m always looking for movies with certain actors and directors whose films may not be on the shelves at the places I shop at.
Now I know Devanny and Brandon had completed a action movie called “Escape From Ensenada” but I haven’t seen it released here yet so until I could get a copy,I had to keep looking,right?
Well I saw a movie at my local Family Video store that not only had Devanny as a lead but Brandon was the director,FINALLY I found a movie I would be able to see these two on the screen and behind the camera. Nope…I took one look and moved on….it wasn’t because Devanny was bad or Brandon was a bad director,I moved on because of the subject matter.

ma·ca·bre
disturbing and horrifying because of involvement with or depiction of death and injury. 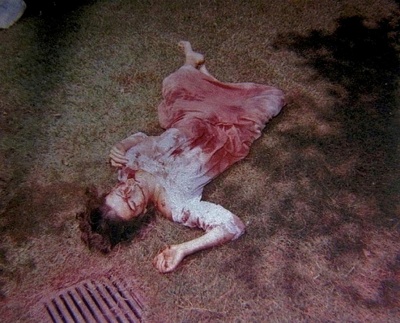 the unlawful premeditated killing of one human being by another.
kill (someone) unlawfully and with premeditation.

Charles Manson and his “family” killed nine people and wounded another during their summer crime spree. While Manson himself was never convicted on murder,he still was convicted for life and spent 45 years in prison before dying.
Take a good look at that pictu

re,that is one of the victims that Manson had killed. Pretty cool,right? I mean,she is all bloody and probably posed just right. Wow,what a night of fun Manson must have had with his group of drug addled racist pieces of filth.
The only thing that matters is that 9 people including a unborn child (Tate was nearing her due date) were killed in cold blood. There isn’t any special about Manson or his group. Nothing to write home about nothing that should be celebrated.
Yet for some strange and twisted beyond logic reason,Charles Manson is the most written about and had more movies made about his crimes then any other mass murderer outside of wartime in American history.
Thanks to Hollywood,Manson has been built up to legendary status,books,movies,a record released of his “music”,etc…these murders have been exploited beyond belief,if anyone could make money off Manson and his crimes,they certainly have.
People can say that there is a “demand” for Manson related stories but I say bullshit to that,we are being force fed this shit just a like a cow or chicken is force fed hormones to bulk up faster so that they can be sold to the masses.

Same thing applies here,if people stopped making movies and TV specials about him,he would fade away from the public eye. I can’t imagine how terrible it must be for the families of the victims watching their loved ones not only get killed yet again but watching people make money off the crime. Next year will mark the 50th anniversary and already Hollywood,led by Quentin Taratino,is looking once again to drag this asshole back out into the light of day. Why?? What more can be squeezed out of this story that isn’t out there? You know Taratino is going to focus on the violence on the acts and show them very graphically and ignore the fallout on the victim’s families. Some say that he’ll focus on the people surrounded by the murders and not exploit them but that would be a first for Taratino wouldn’t it? Personally I am not holding my breath for a film more in line of 1976’s “Helter Skelter” which was more of a docudrama and still the best effort to tell the story factually.
When I decided to write this,I Googled “list of films about Manson”,there are too many out there to actually list,be it directly related about Manson,i”inspired by”,or “based on”.
Think about that for a minute….then add in the other media,every convicted murderer who had a part in the killings seemed to have gotten a book deal to tell their stories.
Really!! I can’t fathom anyone wanting to read about how Sharon Tate begged for her baby’s life before being killed by the people who did it!!! Yet you can assured that in 2019,we are going to swamped by who new wave of books and true crime reenacted stories.  Its a damn shame that of the history that we are forgetting,Charles Manson is the one piece that we can’t seem to let go.

Oh…..does anyone have a copy of “Escape to Ensenada” that the cheetah and I can trade or buy? I still very much want to see Brandon and Devanny in a film….

I welcome any thoughts about this.  Drop a comment.