Hope everyone’s summer as been full of fun and adventure so far. The cheetah and I are on a serious good film run as of late. We caught a pretty exciting Western which we’ll be talking about soon and a movie where Ron Perlman,ol Hellboy himself,is dressed up in a squirrel costume.

But the real excitement has once again come from “MP”,our informant at Warner Brothers Archives who has slipped yet another kick ass DC Comics based series called “Young Justice”.

Young Justice is a hybrid of both “Teen Titans” and the “Young Justice” comic books.
There is a excellent article on Wikipedia about the genesis of the show which will provide die-hard fan boys all the details,you can find it here.
This series is not set in the DCAU,its is set on Earth-16 (it’s a comic book thing) but don’t let distract you from watching this excellent series.

Young Justice starts off with all the sidekicks of other major heroes all helping stop a series of seemingly random attacks by cold based super villains (Captain Cold,Killer Frost,Mr. Freeze and Icicle,Jr. After each villain is stopped,the respective sidekick says “This is the day!!!”. Later at the Hall of Justice we see Robin (Dick Grayson),Speedy,Aqualad and Kid Flash all gather together. When they find out that they are not going to be admitted into the Justice League,Speedy becomes angry and leaves.
He later returns as a solo hero calling himself Red Arrow and he helps the time on many missions and in return,they help him. 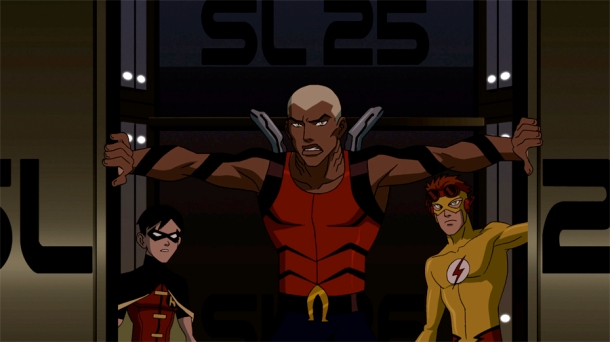 The League is called away on a global threat and can’t offer help to Cadmus Labs,which is on fire. The three remaining sidekicks spring into action and help rescue “the Weapon” which turns out to be a clone of Superman at age 16. He takes the name Superboy and joins the team.
Batman then gathers them together and explains the reason they weren’t selected for the Justice League,he has a different mission for them. Basing them in the first HQ of the League,Mt. Justice,he explains he wants them on covert missions,to quietly handle problems that the too high profile JL can’t be seen at. Red Tornado will oversee the team while Black Canary will handle fight training and Batman himself will assign the missions.

The second episode has the Martian Manhunter’s niece Miss Martian join the team. Just like her Uncle Jonn,she has various powers including telepathy,telekinesis and super strength,she takes an instant liking to Superboy whose anger issues don’t allow him to see the attraction.
Thus kicks off the first season of Young Justice and for an “kid’s cartoon” this had us recalling the superb but very dark second season of Batman: The Brave and the Bold
which was far more adult then one would expect to see on the Cartoon Network.
Young Justice addresses a lot of heavy topics like betrayal(Auld Acquaintance),Post Traumatic Stress Disorder (Failsafe/Disordered),grief (Performance) and family secrets when new Green Arrow protege,Artemis,joins the team. While the story told to the team she is Green Arrow “niece”,no one is really buying into that.

Who Artemis really is ties nicely to the season long arc as Young Justice finds itself facing a mysterious group of super-villains called The Light. For much of the season the Light and the team clash and when Sportsmaster alludes to Aqualad that there is a mole on the team,it almost causes complete chaos as Aqualad chooses to hunt for the mole himself.
There is also a lot of humor as Kid Flash provides most of the comic relief as does this Earth’s version of Captain Marvel,who retains his Billy Batson’s maturity even when he turns into Captain Marvel. The budding courtship of Superboy and Miss. Martian is handled frankly and very sweetly. They each take Earth names (Conner and Meghan) and attend a local high school where they meet a pair of friends who have to seen to believe. Old school fanboys will instantly recognize them and get a kick. 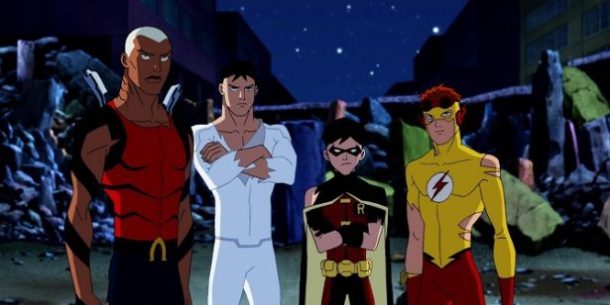 An interesting dynamic is watching how the team finds it leader,now most everyone would think it would be Robin but it turns out not only is Robin NOT the leader but Aqualad,who is,is also the breakout star of the first season. He is the best thing hands down about Young Justice and that credit has to go to the actor playing him,Khary Payton.
Now normally when you have a 39 year old man playing a teen,it can be a little weird.But Payton’s performance is rich and deep,you feel a real emotional connection watching Aqualad battle with such an enormous weight on his shoulders which includes finding out the love of his young life has fallen for his best friend while he is protecting the surface world.  Like I said,this is not your average cartoon show.
The rest of the voice cast features Nolan North as Superboy,Jesse McCartney as Robin,Danica McKellar as Miss Martian,Jason Spisak as Kid Flash and Stephanie Lemelin as Artemis.
The casting of the voice talent is once again spot on and is done by Jamie Thomason who also cast the voices heard in “Superman/Shazam“. 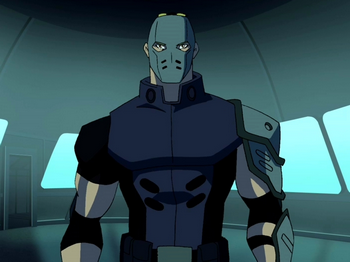 When I first watched Young Justice,I found myself a bit frustrated hearing familiar voices doing different characters,I mean,I really like the way some of these actors play the same character on DCAU shows. But as the season went on and its clear that Young Justice is set on a different Earth,the difference in voices becomes important. You can’t have Kevin Conroy do Batman both on Earth 1 and Earth-16 when each Batman is supposed to be different. With that in mind,Thomason has cast some old favorites and new ones to help make Young Justice a gripping story.

Voice acting highlights include Rob Lowe as Captain Marvel,the sexy Kelly Hu as Chesire,one of my favorite actors,Nick Chinlund,plays Sportsmaster. Bruce Greenwood portrays Batman and the mighty Phil LaMarr plays Aquaman. There are countless other familiar voices that regular DC Animation fans will pick up.
The first season of Young Justice consists of 26 episodes and there are no special features on this BluRay release.  This is yet another example of how Warner Brothers continues to dominate the small screen with its DC Comics animated and live action series. Young Justice is a must have for your collection and you can purchase it by going here. Tell ’em Paladin the Cheetah sent you…..

Share your thoughts on “Young Justice” in the comments below,we would love to hear from you!