Back in 2017,I reviewed the films of a small indie Christian studio called Kelly’s Filmworks which is owned by Jefferson Moore and his wife Kate. I knew I had one film left to review of the set that I had gotten at a closing of a local shop,it was always in the back of my head that I needed to watch it.

But soon I forgot it as I had a ton of new titles to review and post on here. But this week,a funny thing happened….my review of Kelly’s Filmworks “1 Message” started getting solid traffic,somewhere someone was talking about the review and people are coming back to read it. We took this as a sign that we needed to watch “Clancy” and share our thoughts on it…..and with that said,away we go…….

Clancy Miller (Christina Fougnie) is living a very hard life. She lives with a alcoholic pill popping single mother who is also very abusive to her. Clancy does her best to help her mother but being a 10 year old in that situation is extremely tough. Their neighbors know that Clancy’s mother is hurting her and have called Children’s Protection.
Clancy overhears a partial discussion between two caring neighbors and thinks its her fault that her mom is going to get in trouble. If she leaves before hand,maybe her mom will be okay and get some help.

Clancy packs up a little bag and with her teddy bear,she runs away. Later on that day,CPS does show up and has Clancy’s mother arrested for drug possession.
Nick Best (Jefferson Moore) is a hard bitten homeless vet who doesn’t seem to care about anyone,including his police friend Avery (Keith McGill). Avery looks out for Nick and even gives him money to get a bite with. Nick has a low paying job and lives in a alley.
It is on the streets that Nick spots Clancy wandering about,something clicks inside Nick and he starts to shadow Clancy to make sure she is okay. He loses her when he litters in front of a cop and gets a little talking to. 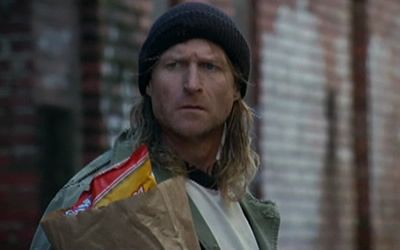 He spots her in a park and falls asleep watching her,he is alarmed when he wakes up and Clancy has already left. While he is concerned,Nick has no choice but to go to his job at the car wash. It is there that Nick spots Clancy and this time she is shadowing him.
Nick gets off work and Clancy joins him and starts asking him all sorts of questions,Nick finds himself taking care of this child. He calls his friend Avery to tell him what is going on,not knowing that not only has Clancy been listed as “missing” but the corrupt mayor and police chief have a plan to use Clancy as a way to get the mayor re-elected. When Avery tells the mayor and police chief that Nick has her and she is safe,they know how they’ll make this work for them. First they send Avery off on a two week “training trip” out west. Then the police chief contacts Nick and offers him 10,000 dollars to keep Clancy out of sight for a week. Feeling a little wary but needing the money,Nick agrees.

When a couple of thugs show up to Nick’s alley looking to collect on a debt,they tell Nick they’ll take Clancy instead and Nick becomes enraged and beats the dog poo out of the thugs,he knows they’ll have to leave town .
The two grow closer as they hunker down in a old shack,when Nick sees the results of the abuse that Clancy has suffered,he knows she belongs in a real home and calls the police chief to come get Clancy knowing full well it will cost him 10,000 dollars. When the mayor finds this out,he decides on a bold and dangerous plan that will see him re-elected…..no matter what the cost.

This is one hell of a movie….and so far off the usual upbeat and positive films one has come to expect from both Jefferson Moore and Kelly’s Filmworks. This is a very dark film with small glimpses of light and it works,so much so that I can say,while “1 Message” and “The Perfect Gift” are my favorite films,”Clancy” is Moore’s BEST film.

The acting is very strong…Nick Best has been beat to shit both spiritually and emotionally and Moore radiates that. Nick doesn’t know WHY he is drawn to protecting this child but only that he has to. Later on,we find out why and it’s so heartbreaking and rings so true. Moore isn’t afraid to show Nick’s edges,that he is bitter,he smokes and drinks and really has given up all hope in this world.

Christina Fougnie is very charming as Clancy. Despite everything that has been thrown at her,she has kept her faith in God and in herself. While her innocence rings throughout,Moore’s script allows this young child to express just how much sadness she holds inside. When her tears start to fall,they begin to heal Nick’s broken spirit and she too,starts to have hope for a better future.
The support cast is also strong with both Tom Luce and Keith McGill being the standouts-Luce as the police chief who knows in his heart what he doing is wrong and McGill as Avery,Nick’s one true friend.
While Kelly’s Filmworks is a Christian film company,there isn’t any heavy preaching or sermonizing here,that isn’t the focus here,the bond between Nick and Clancy is,two people needing help and finding it in each other.

“Clancy” has a run time of 1 hour and 52 minutes and including a cast commentary and behind the scene features. While all of the other films we reviewed were “G”,Clancy should be rated PG-13 because of the subject matter. Faith based films can have a hard edge and “Clancy” has a strong one.
The cheetah and I both gave “Clancy” a thumbs/paw straight up.