Its been a little bumpy as of late in terms of find a full length film that the cheetah and I could sink our teeth into. We have enjoyed several quality short films and some great TV series but full length features have been lacking.

Well our deep cover asset “MP” over at Warner Brothers Archives must have noticed as well because we got a package on our doorstep with a note: “You two need this”.  We opened it up and saw it was a Blu Ray of “To Have Or Have Not”. This film features the first onscreen pairing of then 19 year old Lauren Bacall and 45 year old Humphrey Bogart.

The story opens in 1940 on the island of Martinique where American Harry Morgan is running a sports fishing boat,the Queen Conch. Business has been very slow as Harry’s hotel bill is well over 6,000 francs. He is so broke,he can’t afford to go home. He and his friend Eddie (Walter Brennan) are stuck for the moment.
But Harry has a rich American named Johnson with whom he taken out for 16 days and has run up a considerable sum. Harry means to collect especially after Johnson has lost a expensive fishing rod of Harry’s. Johnson says he’ll pay Harry the next day,he owes him 825.00 and that is quite a lot to Harry. 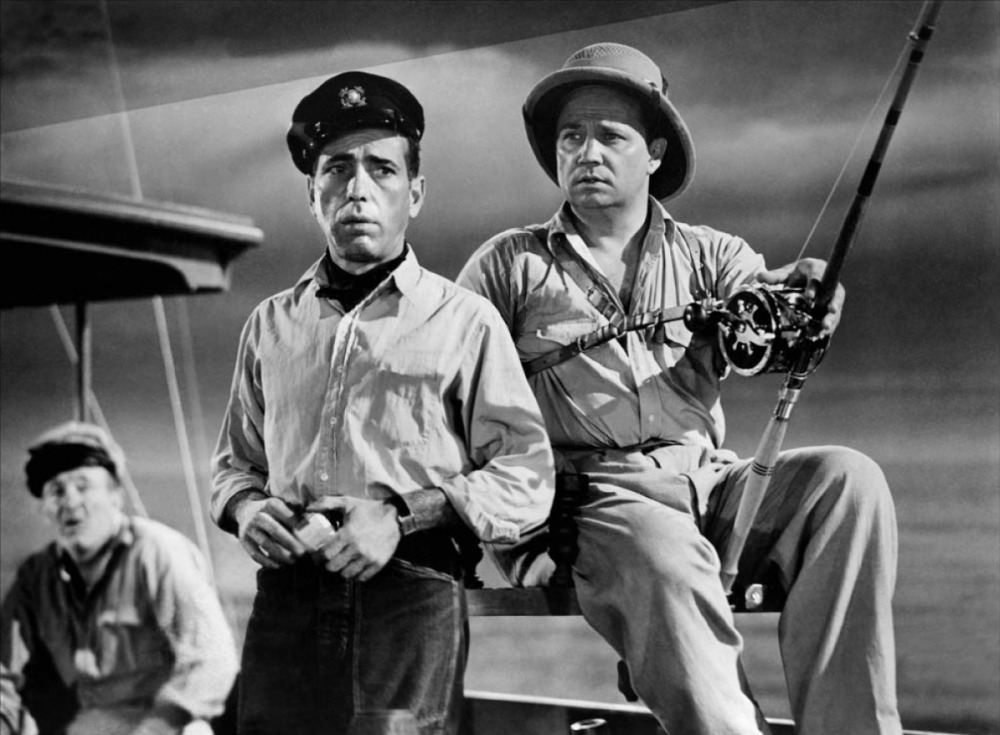 Meanwhile the owner of the hotel where Harry is living comes by to ask a huge favor. Martinique has been taken over by the Vichy French after France has fallen and the Free French are now conducting operations against them. The owner,Frenchy,asks Harry to meet with some of the Free French but Harry refuses knowing its too dangerous.
While talking to Frenchy,a sultry woman named Marie comes over and asks for a light.
This of course is Lauren Bacall and she is slinky as all get out. After getting her light,she saunters back out and Harry’s interest is raised.

Later that night Harry sees Marie sitting with Johnson when he suddenly walks over and steers Marie away while Johnson is distracted,Harry has spotted Marie stealing Johnson’s wallet. As it turns out,Marie has accidentally done Harry a favor as Johnson was planning to stiff him. As the two debate what to do,Frenchy shows up with the four Free French agents who beg Harry to help but Harry again refuses,its just too dangerous. 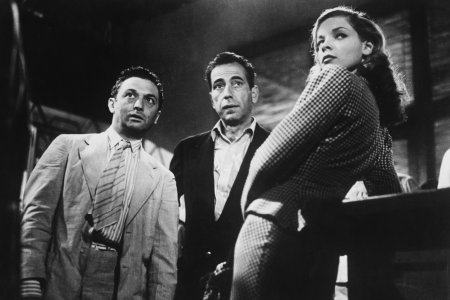 Everyone goes downstairs where Harry confronts Johnson and starts to have him sign some travelers checks to cover his debt. The Vichy police show up and a gunfight ensues where as Johnson is killed before he could pay Harry.
With the Vichy police staring hard at him and finding out that Marie has her secrets she is trying to keep,Harry is finding himself being pushed into a tight spot with only one play to to make. He is off to see Frenchy about that “job”…… 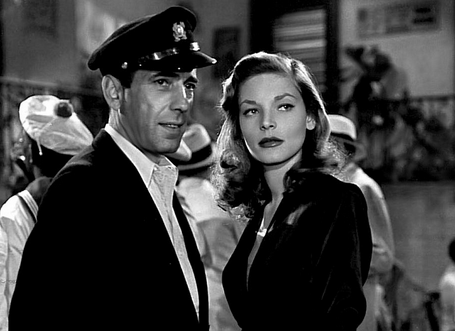 The cheetah said I should stop the plot right there because film lovers need to see this film for themselves. This is why I have Paladin as a co-writer of this here series,he is a smarter cheetah then I am a human in these matters.
“To Have and Have Not” was originally based on a Ernest Hemingway novel but between political pressure,Jack Warner (owner of Warner Brothers) and the censorship department all having a say,the story that was filmed is really a new film and isn’t the story that was written.

Director Howard Hawks had bought the book rights from Hemingway himself and then turned around and sold them to WB for a ton more cash…which didn’t make Papa happy.
Hawks had a writer named Jules Furthman work on the screenplay…the first draft was far too large at over 200 pages. A re-write by Jules cut off 60 pages and made it a lot easier to manage. Hawks,who had discovered Lauren Bacall and cast her in the film as a way to get close to her (Hawks was married),had the script altered even more to make Bacall “pop” more…make her Marie more alluring.

The censorship department took Hawks and Furthman to task,they demanded several changes take place including having Marie drink less onscreen. The US government also had the setting changed from Cuba because at the time,Cuba was our “pal” and we didn’t want to stir up feathers as Cuba was aiding us during World War Two at the time.
Hawks brought writer William Faulkner in to help finish the screenplay and Furthman left the film.
During filming,it was then that Bogart and Bacall started an affair of which Hawks was jealous and Bogart’s wife divorced him. Hawks and Faulkner’s re-write of the script brought a lot more sass and playfulness into Harry and Marie’s scenes. Harry calls Marie “Slim” while she started calling him “Steve”. The chemistry is absolute magic between the two of them and for an adventure story like “To Have and Have Not”,there are a lot of laughs and sparks when Harry and Marie start to spar.
The supporting cast which included Hoagy Carmichael,Walter Brennan and the lovely Dolores Moran also sparkled. Sheldon Leonard also had a small role. He later became a well known producer in Hollywood.
While some critics like to note the similarities between “Casablanca” and “To Have and Have Not”,they are not wrong,Jack Warner wanted to same kind of story based on how huge “Casablanca” turned out to be. The big difference is the tone,”To Have and Have Not” is a MUCH lighter tone and even better in the fact that Harry wins the girl in the end.

The picture quality on this Warner Brothers Archive release is spotless and clean.
The run time for “To Have and Have Not” is 1 hour 41 minutes and includes a classic cartoon,a retrospective feature and an appearance by Bogart and Bacall on the Lux Radio Broadcast of the film.

This film is not rated but I would recommend a “PG” if pushed.
You can buy your copy of the movie by going to the Warner Brothers Archive website.

Needless to say,the cheetah and I both give “To Have and Have Not” a huge thumbs/4 paws straight up.

Comments and thoughts are welcomed.