When we last visited Riverdale,we took a peek at how the CW decided to take the bright and wholesome Archie Andrews and his gang and transfer them to the dark side. Some aspects of this version worked while others fell a bit flat. The one thing that was clearly missing was any sense of real FUN as just about every story line was dark and gloomy.

So will season two despite its now cliche of a cliffhanger,improve over season one?
This was the burning question the cheetah and I were asking so we put out a request via a drop to our good pal and deep cover informant at Warner Brothers Archive to take a look at the second season “Riverdale”.

Season two opens up with a whole slew of twists and turns. The big cliffhanger is resolved quickly in the character involved stays alive but the question of who shot him remains a mystery.
Veronica Lodge’s dad,Hiram (Mark Consuelos- who is REALLY good) comes home to Riverdale after getting out of prison. This of course sets off all sorts of tension in the Lodge household.
Archie responds to a pair of huge life altering events by going off the rails a little bit and forming a vigilante group to protect the his neighborhood from a serial killer called “The Black Hood”.  He also gets invited to be mentored by Hiram which of course creates a rift between Archie and his dad Fred.
He’ll also have to butt heads with his best friend Jughead after the latter assumes the leadership of the Southside Serpents biker gang.

Betty and Jughead’s young romance takes a left handed turn as Jughead’s dad is in jail and Jughead will eventually assume his dad’s place as the leader of the Southside Serpents who also have ties with Hiram and Hermione Lodge.  He also gets transferred to Southside High where he meet Toni Topaz (Vanessa Morgan) who is also in the Serpents.

Betty herself is the main focal point of which the second season runs through…she discovers she has a long lost brother (I know,soap opera 101,right?) and finds that the serial killer The Black Hood has fixated on her and decides to communicate only with Betty.

Veronica finds herself walking a very tight rope when dealing with her very shady parents. She doesn’t want any part of their world yet she knows in order to find out what they are up,she’ll have to get hands dirty. Her romance with Archie also has its ups and down as he is trying to make sense of what is happening to him and the ones he loves the most.

So what did we think of the second season of “Riverdale“?

The pros: Once again the cast,led by Mark Consuelos (Hiram),Lili Reinhart (Betty),Camila Mendes (Veronica) and a fierce Madchen Amick (Alice) once shined the brightest but the entire is very strong and we were glad to see that Madelaine Petsch’s Cheryl was toned down as well,while Cheryl is still as loopy as ever,she wasn’t nearly as overpowering and over the top as she was portrayed in season one.

This was the first time I had seen Mark Consuelos act and I have to say that I wouldn’t want to play poker with him,he is all charm,grace and subtle menace. It’s very easy to see how Hiram Lodge got wealthy,the question that begs to be asked is how the hell did he get caught? 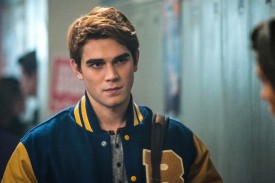 The couples are pretty well established this season as well….its Archie/Veronica and Betty/Jughead and they stay pretty much that way through the whole season.
The cons are the same as last time….Riverdale is simply not a believable story on any level. Asking your audience to watch a bunch of sophomores act like they are in their 20s and making some extremely questionable choices on a daily basis is simply not rooted in reality and makes the show very hard to take seriously in terms of actually caring about any of the characters. While the cast does work very hard,what I felt I was watching was a dark ugly take of the comics….there isn’t much light in Riverdale to speak of.

What the show needs is to establish that it is a little bit based in fantasy and when the rumors were flying that Sabrina (yep,THAT Sabrina) would be joining the show,it would have really helped establish Riverdale as a fantasy show….like Disney’s “Once Upon A Time”.
Instead Sabrina was spun off in a Netflix show and while it be rooted in the Riverdale universe yet have no interaction with it. This is a big mistake as it leaves Riverdale still rooted in completely silly and boring story lines and wasting a fine concept with a good cast.

One last note,one thing that could help Riverdale is too interject some damn FUN into it. It’s based on one of the most brightest,joyful and innocent comics ever created but there is extremely little just pure fun in any of the episodes. Everything is shot in the dark or has a dark setting,its a depressing show to watch at times.

I do think the third season will lighten up a bit unless creator Robert Aguirre-Sacasa decides to fall into the now hoary trope of killing off a main character for a cheap ratings hit. I know in the Archie comic book itself it had Archie dying in saving a friend and while I know Archie won’t be the one killed off,I can definitely see a minor supporting character offed if they want to do yet another serial killer who is a parent story arc again…
I rather see a couple of stand alone episodes that feature Riverdale’s teens acting like…..I dunno,their ages?

“Riverdale” the second season consists of 22 episodes. Its loaded with several extra features including a gag reel and the cast appearance at the San Diego Comic Con.
You can buy your copy of “Riverdale” from the Warner Brothers Archive website as well as the first season.

As for the cheetah and I,we both enjoy the cast of Riverdale and think it’s extremely talented but the writing once again is subpar and way too over written to take the show enjoyable. It’s hard to care about Archie and his friends when they seem like cardboard cut-outs.

We give Riverdale a thumbs up for the cast and a paws down for the overall look of the show.

We welcome your comments……