The cheetah was downstairs when I got home tonight,I had taken back a film that just wasn’t cutting it for us and had decided to find something different. So off I went and when I returned home,I showed him what I got: a new IFC Midnight film called “Ghost Stories”,the last Tarzan movie and the last Captain Jack Sparrow film and “Gonjiam: Haunted Asylum“. Now I fully expected the cheetah to pick Tarzan but he swatted it away and said “Dude,its WAAAAAY past time that we do a South Korean film review because we have loved everything we have watched and yet you haven’t reviewed not a single one. We’re fixing that TONIGHT!!” (The cheetah loves doing his Youngblood Priest voice).
But he is right,thanks to Well Go USA,we have seen some amazing South Korean cinema and “Gonjiam” ranks right up with them…this “found footage” movie delivers after a bit of a slow start.

The film opens with a pair of high age boys who have broken into Gonjiam Psychiatric Hospital,supposedly one of the most haunted places on earth,filming themselves. The two boys are standing in front of  Room 402,the one room that is the most haunted. As they try to break in,they suddenly hear noises rushing towards them,they scream in terror and their lights go off.
The camera pulls back and we are watching a YouTube channel called “Horror Times” as the host Ha-Joon explains that the boys went missing and says that maybe the footage is real,real enough to send in a hand picked group called the Terror Squad in go into Gonjiam and do a live broadcast to investigate the rumors.

The squad consists of three men and three women. The women are Charlotte,who is Korean-American (Moon Ye-Won),Ah-Yeon (Oh Ah-Yeon) and Ji-Hyun (Park Ji-Hyun).
The men,led by the Captain Ha-Joon (Wi Ha-Joon) are Sung-Hoon (Park Sung-Hoon),Je-Yoon (Yoo Je-Hoon) and Seung-Wook (Lee Seung-Wook). They all meet at a little cafe and spend a couple of days getting to know each other before driving to Gonjiam.
Ha-Joon explains that the police have blocked the gates and patrol the grounds and that they will have to hump in their gear through a back entrance. 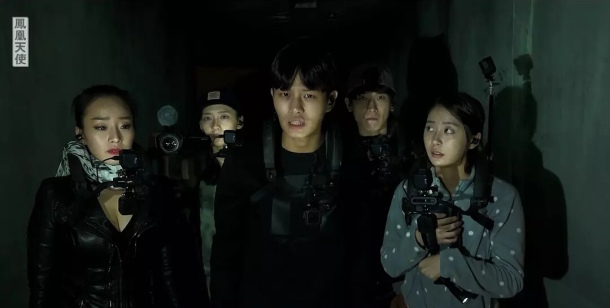 The group arrives at the hospital and hikes in,they find a old pair of underwear and tie it off on a tree just in case they get lost. They set base camp up spend the night getting ready,Ha-Joon sends part of the team to set up cameras and other tech for the broadcast.
The next day with Ha-Joon at the controls,the Terror Squad heads into the hospital and a date with the infamous Room 402.
Charlotte sets up a dish of Holy Water and sprinkles it around the main hallway and then the group is divided into teams of two,Gonjiam is only a 4 story building but its heavily damaged since being shut down in 1979.  She also tags a wall as she has visited 3 of the 7 most haunted places on earth with Gonjiam being the 4th.

Ha-Joon wants to cover all the floors,explore and then for the last part of the show,to open and explore Room 402. The teams are equipped with GoPros and lighting so they can film both forward and also their POV.
Things start off well as each team reports in from their various floors but slowly things start to happen and the nervous fun that is being watched by a huge YouTube following starts to fade as more strange things start to happen including strange power surges at base camp.

When a written message appears under Charlotte’s tag,”Enter and You’ll Die” and a trap that was set up as a warning for spirits is triggered,all bets are off as Gonjiam begins to live up to its infamous reputation….

So did the cheetah and I like “Gonjiam: Haunted Asylum”? Oh hell yes we did!!! This movie was pretty damn spooky once they got to the hospital. While “found footage” films are a dime a dozen,truly great ones are really quite rare.  When you add in several different factors like basing your film on a real place,add in a critical cultural event in live streaming and having the cast use their real names,you have created a very good movie that has overcome the typical Hollywood tropes when it comes to found footage films.

My only two quibbles with Gonjiam,the first 35 minutes does drag a bit,after watching the film you really wish director Jung Bum-Shik had just quickened the pace of the film just a tad more because you would have liked to seen more time spent in the hospital. But that is a tiny issue….because he does a excellent job in getting his cast to act like they are TRULY afraid of what they are seeing.  The script is brilliantly written by Bum-Shik and Park Sang-Min,one wonders if they wrote it while actually staying in the hospital itself.

The other bump is more a general issue. Why do filmmakers of these “haunted houses/asylum” movies always have to have their explorers killed off by these spirits?
These kids have no malice in their hearts nor did they cause the trauma that created these spirits to roam about. Yet they are always the innocent victims,in John Carpenter’s “The Fog”,the mariners who came back for revenge had a reason to attack…they were after the bloodlines of families who were responsible for their deaths,they had PURPOSE,but in the case of “Gonjiam”,there was just reason given for these kids being killed off. Its just an thought that the cheetah and I were debating about.

“Gonjiam: Haunted Asylum” is rated “R” and has a run time of 95 minutes. Sadly there are no extra features. “Gonjiam” was released in S. Korea in March of 2018 and set box office records as it has become the 2nd most popular S. Korean film of all-time.
The cheetah and I both give “Gonjiam” two huge thumbs/4 paws straight (and a fluffed tail,I am not supposed to mention that)

What foreign film has spooked you recently???? Leave a comment below!