So right after the cheetah and I finished reviewing “Shadow of the Hawk” we of course had to watch “Nightwing”,yet another film I saw at the old Montclair Theater when I was growing up. 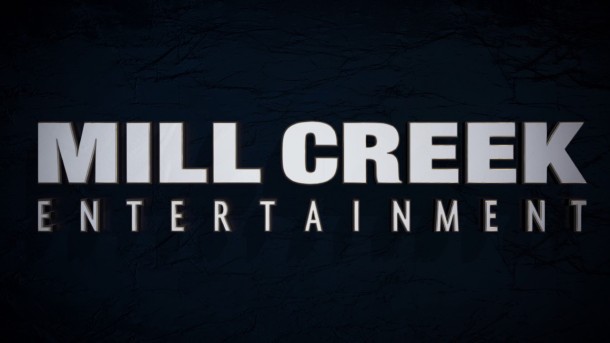 Now the thing about “Nightwing” was that I had read the book written by Martin Cruz Smith first before seeing the movie. So I had a little idea of what to expect.  I have not watched “Nightwing” since I saw it almost 40 years ago. I remembered the cast as David Warner had a big year in 1979,doing this film and “Time After Time“.
This is part of the double feature format that Mill Creek Entertainment has recently been putting out and there is thought behind it as well as fun and rarely seen films.
Our thanks to “H” for letting us take a walk back into film history…..

The film opens with Tribal Police deputy Youngman Duran (Nick Mancuso) arriving at a ranch to investigate a mass animal killing. The owner of the ranch is frustrated by how long it took Duran to get there.
They look at the various bite marks on the horse but no one has ever seen any bites like these before. As they discuss the matter a helicopter touches down as another trial leader named Chee shows up bringing in a trained veterinary doctor. The doctor is also baffled. It becomes clear that Chee,a white educated Indian, and Duran don’t get along at all. Chee is respectful and is trying to convince Duran that a land deal involving Duran’s tribe’s most holy ground,is for the best but Duran is having none of it. 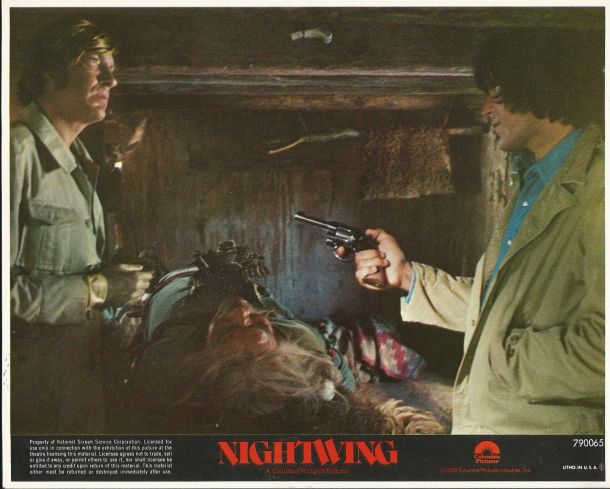 Duran leaves and goes sees his Uncle Abner,a powerful shaman who creating a spell on his floor. Duran is there to make sure Abner doesn’t cause any disturbance at a local celebration. Abner is not in a joking mood,he tells Duran its time for the world to end and he is casting the spell to make it happen. Duran tries to find out more but Abner only says that he,Abner,will be dead by the next day. 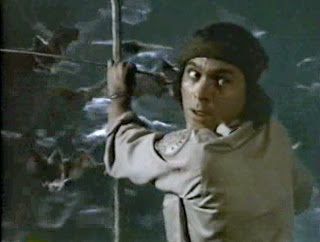 Duran leaves,he is even more unhappy and heads to towards his village.
We then see Anne Dillon (Kathryn Harrold) delivering a baby while trying to stop a relative of the mother from giving her a root of some sort. The baby is born but it is a near thing because the little clinic doesn’t have the equipment it needs.
Duran shows up and it clear he and Anne are a item,they share small talk and then go to a hot spring. 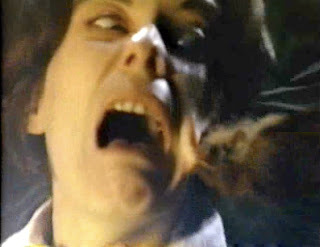 Anne has a chance to go to Baylor and become better educated,Duran is unhappy but understands why she has to go. She tells him she almost lost the baby earlier in the day and she needs to learn more so she can help more people. They make up and enjoy their time together.
Meanwhile a young boy is watching over his flock of sheep,suddenly the sheep start running in panic,they are being attacked by hundreds of vampire bats. The herd stampedes and knocks the boy down. As the bats attack the sheep and dogs,the boy takes cover in a old car. 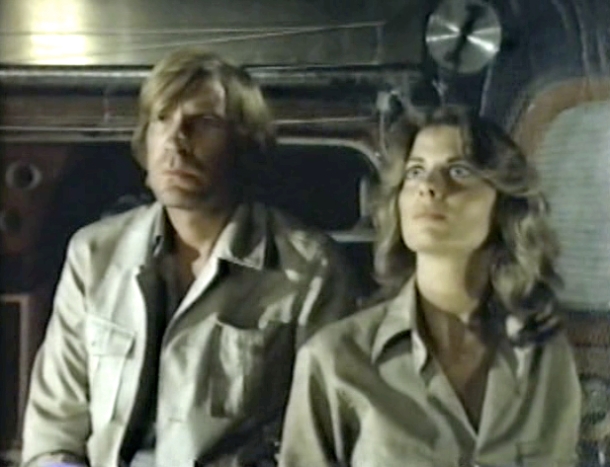 The next morning Duran visits his uncle and sure enough,Abner is dead,killed like the horses he saw the day before. He goes into town to get supplies to bury his uncle and comes back to see a stranger taking skin samples from Abner. Enraged,Duran threatens the man and not listening as the man introduces himself as Phillip Payne (David Warner). While Payne now knows he made a error in entering the house,he tries to tell Duran that there bats are highly dangerous,Duran pushes him outside and then goes and buries his uncle.
Duran knows something is afoot and he warns Anne,who is leading a group Christian missionaries on a weekend outing,to be very careful. He is starting to believe his uncle’s magic.

Payne is also busy as he also tries to impress Chee on how dangerous these bats are,he has been hunting and killing these colonies for years and he is very good at it. But the bats have the plague and even one or two bites could be fatal. Payne enlists Chee’s help in keeping Duran off his back for 36 hours while he hunts for their cave.
Things go from bad to worse for everyone concerned and soon Duran,Payne and Anne are on a desperate mission to stop the bats before they wreck havoc across the whole Southwest. The daylight is fading and the bats are beginning to stir….. 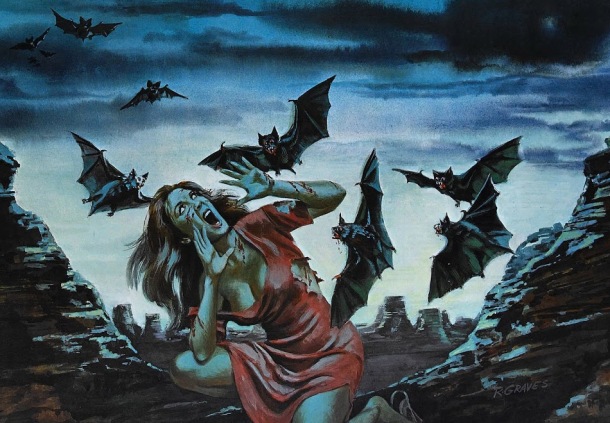 “Nightwing” is still pretty damn solid,it has held up extremely well for being almost 40 years old. Its suspenseful,respectful of the Native Americans it portrays for the most part,the performances are fine and even,even Warner,whose bat-hunter is a bit twisted,plays Payne as a dedicated scientist who realizes how dangerous a plague carrying bat is. While I admit that calling them “evil incarnate”is a bit extreme,the fact that maybe Abner supernaturally called them,well maybe Payne has a point.
The special effects are still decent,I mean I would match the bats used against the CGI of most low budget creature features of today. The ending could have been a bit stronger,the pay off to a suspenseful story is a little weak.
The cast is top to bottom very good,Mancuso and Stephen Macht are equally good as Duran and Chee,both want better for their peoples but want to do it differently. In another time,these could would have been good friends.
Kathryn Harrold is drop dead beautiful and she was one of my favorite actresses growing up. She more then holds her own and showcases just how sharp her Anne is when a tragedy leaves her stranded in the wastelands. Harrold did a few decent films in career but like Marilyn Hassett,just never seemed able to grab the more meatier roles other less talented actresses did. She remained a working actress until she retired
Mancuso would go on to have a solid career as both leading man and later as a character actor. He did another cult favorite film in 1980’s “Ghost Ship” and the short lived series “Stingray”. He is currently still very active.
David Warner is a living legend,his star has always shined brightly and the numerous movies he has starred in is incredible. He is in fact appearing in “Mary Poppins Returns” which will be out on 19 Dec.  His Phillip Payne is remarkable one key respect,its one of the few times Warner got to play a “good guy” as he is known so much for his “heavies”.
Director Arthur Hiller,while known for making comedies like “Silver Streak” and “The Hospital”,did a fine job in helming “Nightwing”. The movie is paced well and he used the bat scenes with restraint which helped build up the suspense. 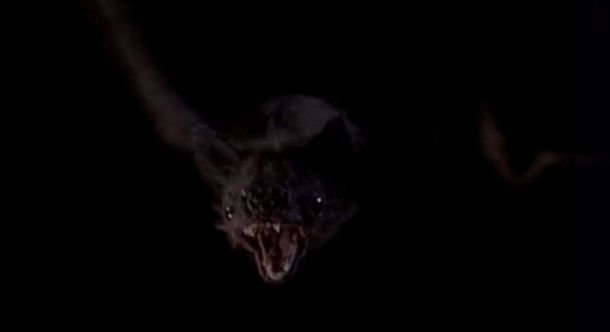 “Nightwing” is rated “PG” and has a run time of 1 hour and 42 minutes. There are no extras on this BluRay release.
You can buy your copy of “Nightwing”/”Shadow of the Hawk” from Mill Creek Entertainment Amazon page.

The cheetah and I give “Nightwing” a big thumbs/3 paws up,it would have been four paws,but he caught one of the bats with his free paw.