I thought it fitting to mark our 300th review by wrapping up our Static Shock series.
We have reviewed the first three and season four marked the end of the show. I really have enjoyed writing about one of my favorite cartoon series and want to thank Matt from Warner Brothers Archives for giving me a chance to share my thoughts about Virgil Hawkins aka Static. Even at almost 20 years old,”Static Shock” has more then held its ground as a true pioneer in both in mature story telling and in handling real life problems that kids today face even more so then when the show first aired.

The theme of the final season was teamwork as Static and Gear found themselves working with old allies,unexpected allies and in Static’s case,even teaming up with his adult self 40 years in the future. This happens as the season opener “Future Shock”. Virgil gets accidentally sent into the future where he teams up with Terry McGinnis from “Batman Beyond” to save himself.

In “Out of Africa”,I saw a episode that I hadn’t seen before and what a treat it was as we see the return of Anansi,the mysterious hero Static first met in season three’s “Static In Africa”. Once again the two heroes team up to take on Osobo as he searches for the Golden Spider that houses Anansi’s powers. The mission turns personal when Virgil’s sister Sharon gets caught up in the action.

In the next episode,”Fallen Hero” star Phil LaMarr does double duty as someone is attempting to frame John Stewart aka Green Lantern for a host of crimes. Being that Green Lantern is Static’s hero,Virgil is dismayed to see Green Lantern seemingly go rogue. Static and Gear will either have to help GL clear his name or take him down…
I don’t know when the word was given to the producers of “Static Shock” as to when they were told the season was going to be the last because they were already laying the framework for future episodes by creating a new dark based hero team called the Nightbreed. Of course things don’t go so smoothly as Static’s arch-enemy Ebon has other ideas on which side of the law the new team will follow in “Army of Darkness”.
The next two episodes not only features the best episode of the fourth season but also the worst episode of the entire series. Its rather jarring to see just how big of a gap in story quality that “No Man’s Island” and “Hoop Squad” has. 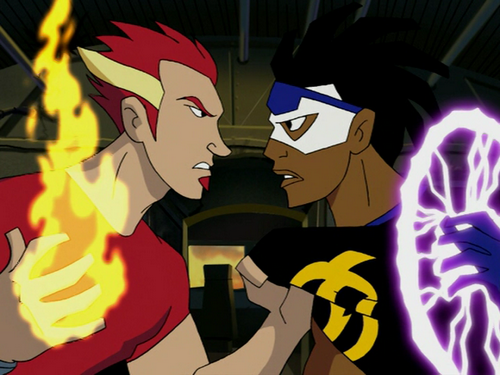 In “No Man’s Island”,Static and another of Static’s foes from the Metabreed,Hotstreak,square off in Dakota when they are both attacked and kidnapped to a isolated island. In a nod to the classic film “The Defiant Ones”,Virgil and Francis are handcuffed together and the only way they’ll make it out safely is to work together.
Season one’s main villain,Edwin Alva,is attempting to save his son Edwin Alva,Jr. who was turned into a living stone statue when the son used untested gases as the bad guy “Omnifarius” and paid a terrible price.
Now Alva has kidnapped several Bang Babies,including Gear,in order to drain their power in an attempt to save Junior. The ending is one of the coolest in the entire series and showed that differences can be overcome for a greater good.

But the next episode “Hoop Squad” is easily the most goofiest in the entire series. Virgil and Richie get a chance to attend an all-star basketball game and meet NBA players Karl “The Mailman” Malone,Steve Nash,Tracy McGrady and Yao Ming. When an emergency arises,Static and Gear have to tackle a creature made of nanobites. The two heroes are hard pressed when suddenly four strangely garbed being show up to help,its the four players that Virgil and Richie met earlier. They are wearing specially made battle suits and have code names. Yeah,its as cheesy as it sounds…what was funny is a squad consists of FIVE players,not four and that even the players must have watched episode and other then Malone,decided not to actually provide their own voices. LaMarr did double duty on this episode as well. 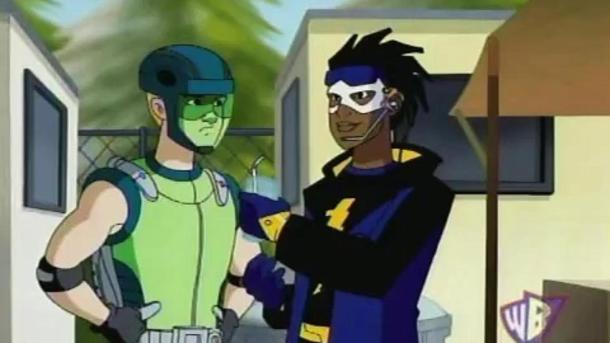 The series ends on a high note as a cure to the Bang Baby gas is created and many of the metahumans affected are being cured,whether they want to or not. This affects Virgil and Richie as their powers are fading away. Both heroes and villains battle it out for the one remaining can of has that can restore their powers.  As “Power Outage” closes,we see Static and Gear still fighting the good fight as Richie starts figuring out a  cure for the “cure”.  Other then Ebon and Hotstreak,we don’t know who else retained their powers and honestly,that is a good way to end things….

As in the entire series run,the secret weapon as to what made “Static Shock” a classic entry in the DCAU was voice casting director Andrea Romano and this was no different in season four. Besides the outstanding work of Phil LaMarr (Virgil/Static), Jason Marsden (Richie/Gear),Kevin Micheal Richardson (Robert Hawkins) and Michele Morgan (Sharon),the guest voices were also quite good as Michael Jai White,Patton Oswalt,Michael Rosenbaum and Carl Lumbly once again led an outstanding voice cast.
While the stories weren’t quite as strong as action took place of character development that we saw in seasons one and two,that same action was fun to watch. “No Man’s Island” was my favorite episode of this season but every episode,even “Hoop Squad” had its moment.

You can buy the entire series by heading over to the website of Warner Brothers Archives.

Thank you for reading our look at a great show and the cheetah and I had a great time sharing this one with you all. Thank you D’Wayne for creating such a great hero.

What is/was your favorite animated/cartoon show? Drop us a line and drop a show that you would like us to check out if we can.