Its been a while since the cheetah and I went globetrotting with our friends at Artsplouitation Films and just as we were getting a little antsy,we got a package this week. Seems like the Polar Vortex had wanted a few movies to watch and has weather-jacked our package….until the Vortex saw WHO the packaged was addressed to. No one,not even Mother Nature,wants to deal with a grumpy cheetah.
For this trip,Paladin and I are headed to Norway for one of the strangest movies we have reviewed,a film called “The House”. Fasten your seat belts!!

The year is 1940 and Germany has just invaded both Norway and Denmark. The film opens up with a dying Nazi German soldier named Max who is trying to be helped by a fellow solder named Fless (Frederik Von Luttichau). Lt Kreiner (Mats Reinhardt) watches,know that Max is a goner,Fleiss begs Kreiner for the last of the morphine despite it being the last of their meager supplies. Fleiss watches as Max dies in the heavy snow. We see then that the two Nazis have captured a Norwegian solder named Rune (Sondre Krogtoft Larsen) who has a badly injured leg.

Fliess wants to kill Rune because he’ll only slow them down by Krenier orders him to holster his weapon and the three move out. They get lost and Rune is getting weaker. Kreiner tells Rune he must keep up be left behind. Suddenly Fless spots a farmhouse and its flying a Norwegian flag. The two Nazis enter the home and not only hear a radio but also a hot meal that was left when the owners left.
They gather up Rune and enter the house,the two soldiers search the house but find no one there. The two men notice a lot of crosses gouged into the walls along with plenty of lit candles all over the house.

Things begin to slip sideaways when the hot stew the men eat has no taste. They then begin to hear noises from outside as well. Kreiner instructs Fliess to take down the Norway flag and run the Nazi Germany flag up instead. As Fliess does this,he spots movement upstairs and runs back into the house…Kreiner and he explore the room where he saw the motion and discover what appears to be a guest book that many have entered their details including an entry in German that sounds exactly like their situation. When Fliess falls asleep and begins seeing faces from his past,he insists that they must leave this house right this second. The two Germans leave Rune behind and begin to hike out but when they find themselves back at the house…. 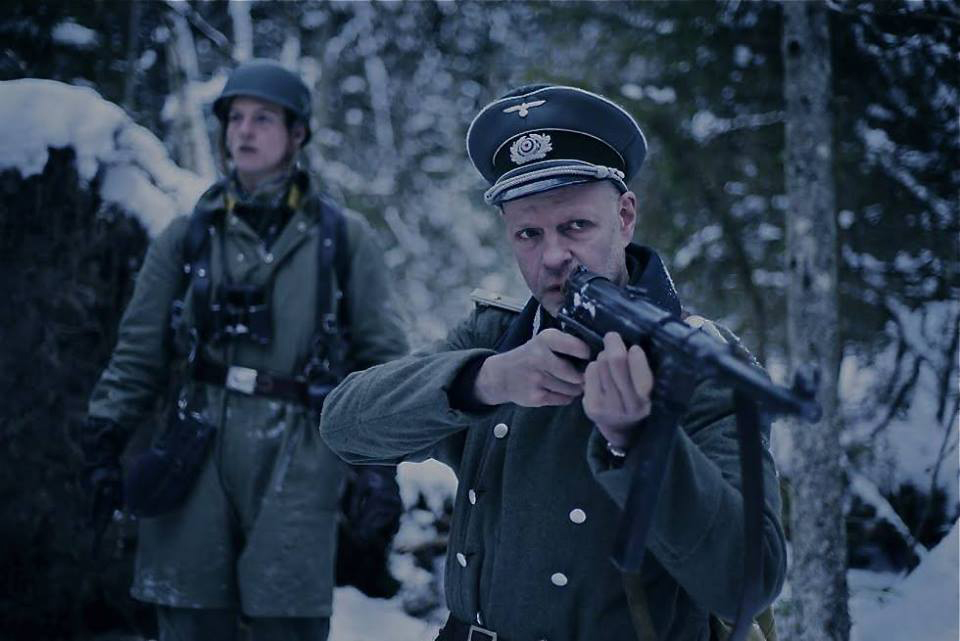 Alright,let me be straight forward honest…..I was cheering the house and the ghosts inside because face it,who is going to be rooting for a pair of Nazi soldiers? We wanted their demise to be really slow and really painful but while director-writer Reinert Kiil doesn’t do that,he does make sure that the pair end up in hell and whatever I think of this film,at least it had a happy ending.
As for a scary haunted story,”The House” is creepy enough,all the usual creaks and door slams as expected are here but the lighting is just terrible. You really can’t see a lot of what you are supposed to be scared of. There are some figures but most are shot in natural light which seems to be the night time. Its more then a little frustrating because as a viewer,you like to see whats coming at you and in The House,you never do. The story seems a bit confusing in the last act,we never know how or why the house ended up haunted,there is a exorcism scene but no explanation as how or what caused it. 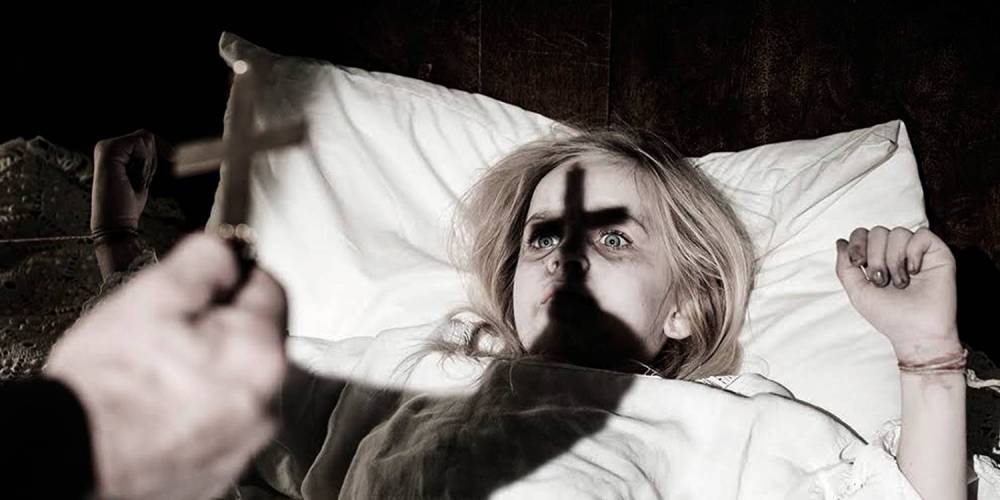 As far as the acting goes,it was solid,the three male leads were very effective. Reinhardt does come across simply as a soldier and while you know every German who served wasn’t a Nazi,we do find out that Reinhardt was once a member of the SS and anything sliver of sympathy you may have had goes right out the window. Its sort of strange watching a haunted house movie where the visitors are more evil then the house and its demons.

This is a solid horror film that depends of story and pace more then gore and scares.
Its worth a look for horror buffs who like rooting for the lesser of two evils.
“The House” has a run time of 88 minutes and would be rated PG-13. It is shown with subtitles and the special features are pretty good with a Kiil directed short film along with a director’s commentary in English.
You can get a copy of “The House” by zipping over to the website of Artsploitation Films.