Welcome to another “8 Questions with…..”

I like to think that anyone who has read our film reviews may have picked up on thing- I love character actors. Those actors/actresses you see in just about every movie and know they are always going to deliver the goods. Their names and faces won’t make most posters and they may listed 15th or 20th in the credit scroll but without these stalwarts,most movies would just crumble.
This is why I was pretty excited to talk to Mike Ferguson,not only is he a great tough guy but he is loves good music and hates fascists. I mean,what more could one hope for in a artist,right? From the mean streets of Boston to the sun of Southern California,Mike has seen quite bit in his days.
As luck would have it,right after Mike and I set this up,I was able to find a coupy of “Silencer” and was able to check Mike out in action. After reading this interview,I know I will have to go back and find more of his films. But for now,we’ll have to settle asking tough guy and family man Mike Ferguson 8 Questions……. 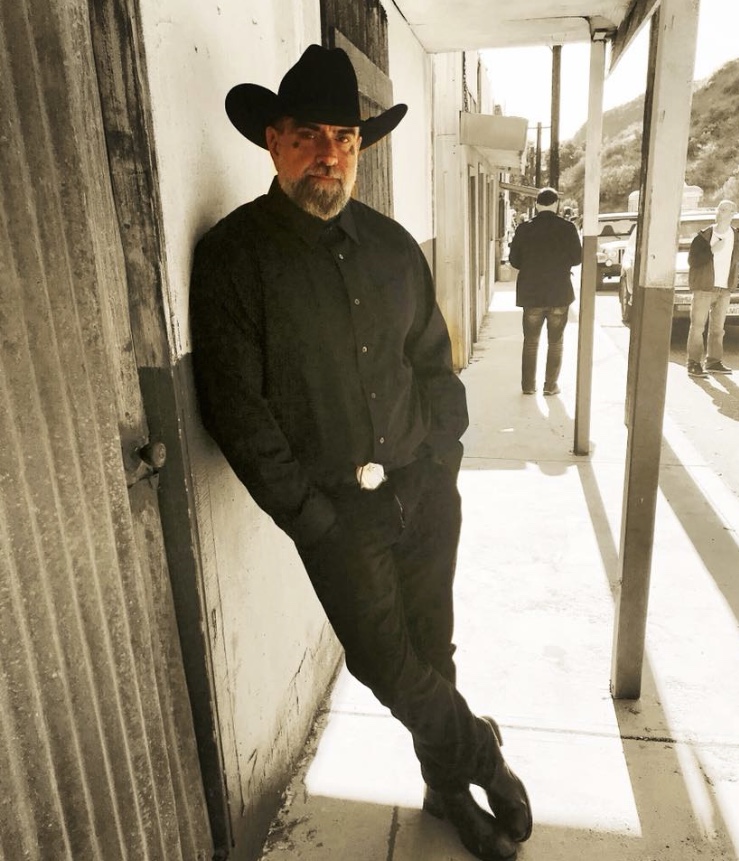 Please introduce yourself and tell us about the project you are currently working on.

I’m Mike Ferguson, originally from Boston, currently residing is sunny southern California, scorpio, actor, tattoo artist. I am currently working on three films right now,one of which is titled Moon of the Blood Beast,which is a  Grindhouse Horror story.
Written and directed by Dustin Ferguson, huge fan of his work, when he hit me up to be the lead “Ricky the bounty hunter” I was like “HELL YES”!!!
The second movie I am working is “One in the Same” by Felipe Cisneros.I went through a traditional casting process where I went and auditioned. It is a science fiction movie and I play “Uncle Russ” who happens to be a bad guy, which of course I play a lot.
The third film I am currently filming is called “The Devil’s Heist”, I play Lucifer. I am having a lot of fun on this project and If you can see the movie I am shooting there is a general theme of the characters I play…..BAD GUYS!!!

What was Boston like when you were growing up? How did you discover your love of music

Boston was a tough place growing up, I was a skateboarder in a time when it wasn’t cool- we’re talking about the 1980s. So when, I was called by the jocks “faggot” or whatever name they could come up with,  that instantly pulled me away from the main stream scene and into the underground punk and hardcore scene.
There I could hang out with the other people who had been deemed “less than” by the main stream society. It gave me a real sense of belonging, a family. We started diving into things like social justice, equal rights, none of us drank or did drugs because that’s what normal society did and we weren’t normal society, we wanted to fight for what is right. I can’t tell you how many fistfights I have been in with neo nazi skinheads etc. 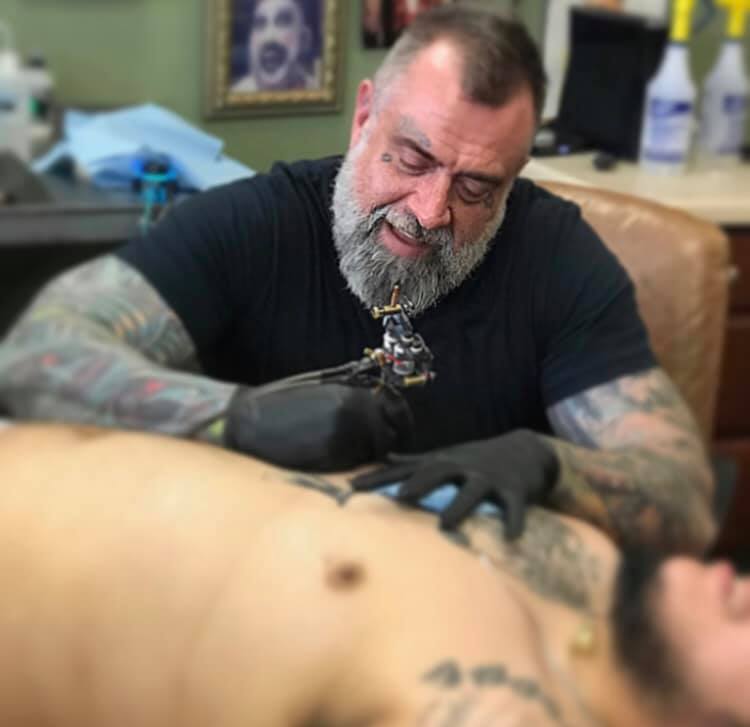 How old were you when you got your first tattoo and how did your folks handle it?

I got my first tattoo when I was 13 years old. It was a straight edge tattoo for my favorite band Slapshot. My folks handled it very poorly, they were very upset. I definitely took a beating or two from dad for it. So, what did I do? I got more.

What do you feel about the state of country as of today,both as a citizen and a father?

I definitely think our country is going in the wrong direction at this time. I feel we are going backwards instead of progressing forward in regards to POC rights and women’s rights, just human rights in general. The United States is looking more and more like and Oligarchy and I am in fear for my children’s future because I have all daughters. We are ignoring science and that is going to cost us all.

What thee people have influenced you the most as a actor and how did they impact you?

Bill Moseley from Texas Chainsaw Massacre 2, The Devils Rejects, House of a thousand Corpses, The Blob, and many many more. I met him at a horror convention we would email each other all the time and just bullshit. This was before I started acting.

The second individual is Danny Trejo, this guy has tons of tattoos, was in From Dusk Till Dawn and just many many more. This guy is one of the people who I looked at and was like “Fuck, I can do this too”. I’ve had the pleasure of working with him on the feature film SILENCER, And I’ve had the pleasure of being a bodyguard for him hired by a production on a project.

The third is Robert LaSardo, look I’ve gotten to sit down and talk to him about acting and learn some trade secrets which I’m not going to tell you lol because I’d have to kill you. I’ve gotten to sit down and have dinner with him and pick his brain and he was so receptive and forthcoming it was awesome, also this guy has as many tattoos as me and has worked on everything from Nip Tuck to Law and Order. I’ve had the honor of working with him on Silencer. I’m about to be a part of a project with him in May, The Last American Horror Show 2 by Michael S. Rodriguez, I play Killer Callahen.

What was your first time auditioning like and can you describe what you felt when you were cast for the first time?

My first audition was horrible, my mouth got dry my hands started sweating, my pacing was terrible and I couldn’t remember any of my fucking lines, you know, normal first auditions.

Every role is so much different but basically every role is my favorite and I’m just stoked to be out there on set acting and meeting creative like-minded people. 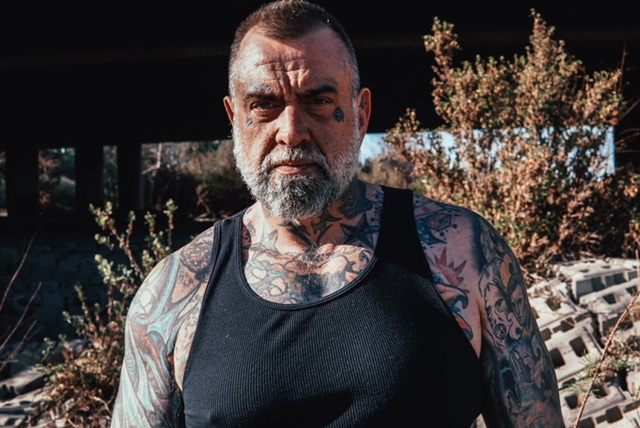 What do you like playing more,tough guys with heart or just plain evil heavies.
How do you get into the mindset of playing a not so nice guy?

Plain evil heavies!! It’s easier for me to jump out of those roles. The tough guy with a heart is kind of reality so that’s where the lines blur. How I prepare for the role of bad guys, it’s my way or the highway, anybody who gets in the way gets put to the side, I don’t care about the damage, everyone else is insignificant, the task at hand is all that matters. By blood and bone. 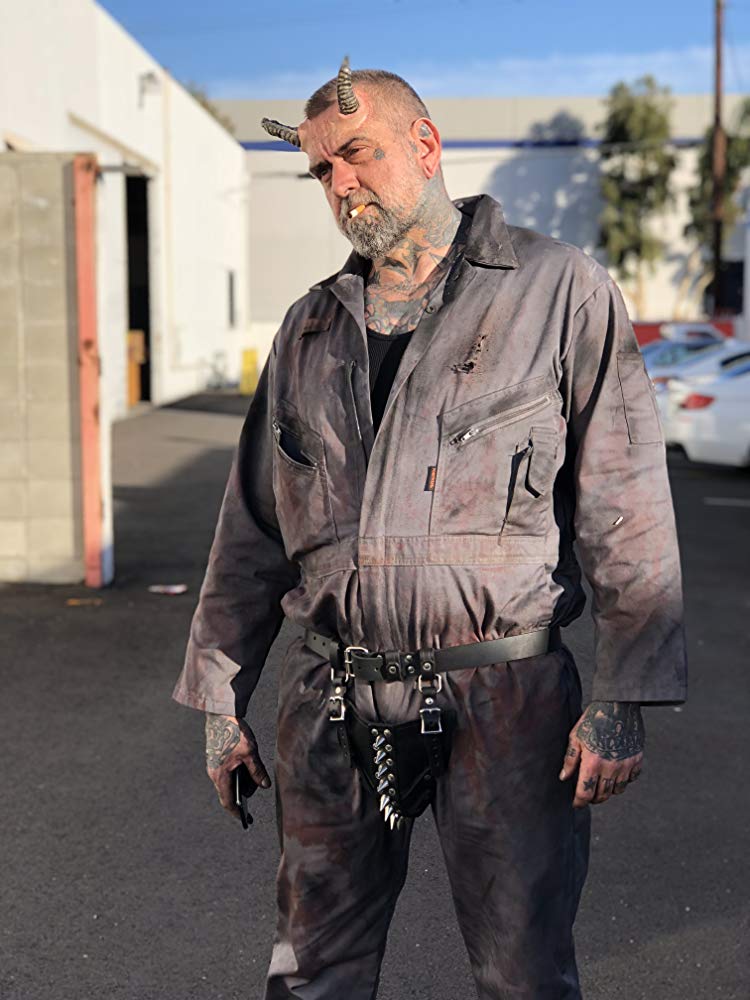 What is your opinion of today’s music scene? What are your three favorite singers/bands today?

My opinion of today’s music scene, ok, wow…. It’s not as fresh and as ideologically driven as it was in my youth, but I do have some favorites. One of my favorite bands right now is Rammstein. They are an industrial metal band from Germany. Every song, every music video is art. It’s all in German which I don’t speak but it transcends that through art. By the way I do look up the song translations to get a better understanding of the meanings.
The second band are friends of mine who I’ve been tattooing for over 15 years, Bleed the Sky which is a metal band. The drummer is also in Devildriver another popular metal band. They are just great friends of mine they get it we’re brothers- we call each other on the holidays and celebrate each other’s birthdays. It’s a very personal relationship.
So, for number three. What band is one of my favorites these days. Man, it’s so funny and fucking weird how much my musical preference has changed. Childish Gambino is one of my favorites This is America was so beautifully shot, thought out and sociopolitical. He is art from top to bottom and I just drink it in with a smile on my face.

Where do you see yourself in 5 years?

Where do I see myself in 5 years? Wow…… hopefully still making art and being happy on my terms and not societies.

The cheetah and I are flying in to watch you on the set of your new movie but we are a day early and you’re our tour guide,what are we doing?

So if you guys came out to visit me a day early I would be at one of the tattoo shops I own 1st Amendment Tattoo in Temecula/Bakersfield California. Ive been tattooing for 30 years and if im not on set im trying to create art in some other way. We got one life and a very short time on this planet and im trying to live my best life on it making art. Look im gonna say thank you so much for talking to me. Right on to the real death to the fakers!!!

I like to thank Mike Ferguson again for taking the time to talk with me. I had a lot of fun putting this one together and have nothing but respect for an artist who isn’t afraid to take the glamour roles.
Someone once said “There are no small parts” but I’ll take it further and say if there weren’t character actors like Mike,there would be no films worth watching.

To see where Mike is popping up next,follow his IMDb page.

If you need some killer ink,visit 1st Amendment Tattoos.

Drop a comment below and let us know what you thought of this interview.
Love to hear your feedback……if you feel you have a story to tell,reach out and say hello and we’ll talk.

Thank you for your support!