Its 1:06 am
dark/fireworks going off

Last Friday night I did something I never do,I made a trip to my video store. I felt like getting out and so I saddled up and off I went. The store was pretty busy as I walked in…so why was I there at a time I normally avoid? Why to buy “Hostile” of course!!
I had been keeping a eye on it and just was waiting for it to go on sale and it finally did.
The only thing I knew about this movie was that Xavier Gens was presenting (or backing it) and young actress Brittany Ashworth,whom we had seen in “Accident Man” and “The Crucifixion” (which Gens directed) was the lead in this movie.
The cheetah and I sat down and watched “Hostile” and I am going to be honest,this one had us completely confused……

In the near future we meet Juliette (Ashworth) who is checking out a ghost town looking for suppilies of any kind. The setting could be from any number of dystopian films we have seen,she carefully approaches the empty buildings armed with an extremely large handgun.
Finding little in the way of anything,she radioes her base and says she is coming back via a short cut,the voice on the other end warns her to be careful and be back fefore dark.

Juliette runs across an RV on the road back and knowing this isn’t normal,stops to investigate. She sees a mortally wounded man who was attacked by a “Reaper” which is some sort of mutant living in the wastelands.
She asks the man if he has any food in the RV and he says “yes” which is enough to encourage Juliette to enter the RV and go nose-to-nose with the creature of which we don’t see as of yet. After killing the Reaper,Juliette collects the supplies and sees that the stranger has died of his wounds.
She gets going and as she is driving,she looks at a picture of her and a man in much happier times. Suddenly a burst of winds catches the picture and as Juliette tries to catch it,she crashes her truck.

As she lies there unconscious,we go back to her past which is not so long ago.
Juliette has crashed a art show party because of a rainstorm.It is here that she meets Jack (Gregory Fitoussi) who owns the art gallery. Jack shows Juliette several pieces of art and as they move about,Juliette grabs some food and hides it in her coat pocket.
Back in the present,Juliette wakes up in incredible pain,she has broken her leg and its also trapped. As she struggles to free herself,she sees a Reaper outside and also her pistol which was thrown askew in the crash.

Worse yet,its also starting to get dark. As Juliette continues to fight to free herself and to save her life,we are shown through a series of flashbacks of how Jack and Juliette became a couple and much like Juliette’s struggles in the truck,it wasn’t a easy path.
Now with no chance of help coming until the next day and very limited suppilies and weapons,Juliette must look within herself to find the answers in the past in order to survive in the present…… 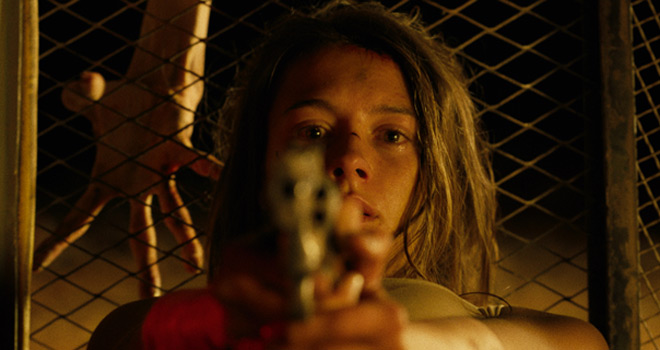 First the good news…..I really loved the acting in “Hostile”. Not only can Brittany Ashworth hold her own in a action movie as a capable fighter and suvivor,she has a real gentle quality to her acting as well. I know I might get waylaid for saying this but Brittany reminded me of Jennifer Lawrence in the she played Juliette and that is a GOOD thing,its very hard to have to cycle through so many emotions and doing it solo. Ashworth isn’t afraid of letting us see not only her tough side but also her inner self-doubt and fear. She does a excellent job here.
Gregory Fitoussi as Jack is also very good,his chemistry with Juliette feels real and the steps he takes to help her is both heroic and very moving.  I have never seen Fitoussi before “Hostile” but I am quite interested in seeing what else he has done. My only complaint is the stereotype of having someone French always smoke,drink wine and eat cheese…its tiresome and boring.

Now the hard part…..this movie’s timeline makes ZERO sense. When we meet Juliette,she is maybe 25-26 years old and the world is a supposed wasteland but when the flashbacks start happening,she is 19-20 years old. What writer/director Mathieu Turi is trying to say is impossible to grasp,we’re supposed to believe the entire world or even the United States has gone belly up in six years?? Worse yet is he fails to explain how his world got from yesterday’s normal world with lofts,art galleries and all the modern life’s perks to complete hell. There is a little blurb about a nerve gas attack but there is no follow up,zero explaination.
We know Jack and Juliette both live in New York City but again,Turi provides zero answers as to how Juliette landed where she has. All we’re left with is two very good performances in perhaps the most confusing movie I have seen in a long time. Its frustrating watching to say the least.
I will say the film looks great…Turi did a nice job in terms of location shooting,one can feel that Juliette is truly on her own with little hope and the Reapers look pretty cool.

“Hostile” isn’t rated but should be considered a “R” rated film for language and gore.
It has a run time of 83 minutes and there no no special features.

The cheetah and I were torn,while the story is lost in a sandstorm,we think Brittany Ashworth is a fast rising star and Gregory Fitoussi is a actor we want to see more of.
For this reason,we gave “Hostile” two thumbs/two paws up.