When I went to my local Family Video store recently,I picked up two films…..one was “White Chamber” and the other one was the movie we’re talking about today,the survival drama “Arctic” which stars the excellent Mads Mikkelsen. As with “White Chamber” I got “Arctic” solely on Mikkelsen’s name only. While he was wasted in “Dr. Strange”,I had been introduced to his acting in a IFC Films movie called “The Salvation” which was amazing.  This is one of those films despite knowing nothing about it,you just know is going to be great…..right??

The film opens as we see Overgard (Mikkelsen) is seen digging a trench with a pole. Its very hard work because he is in a remote area of the Arctic. His watch goes off and he stands up and leaves the trench and at the point the camera draws back to see Overgard has been making a huge “SOS” sign. 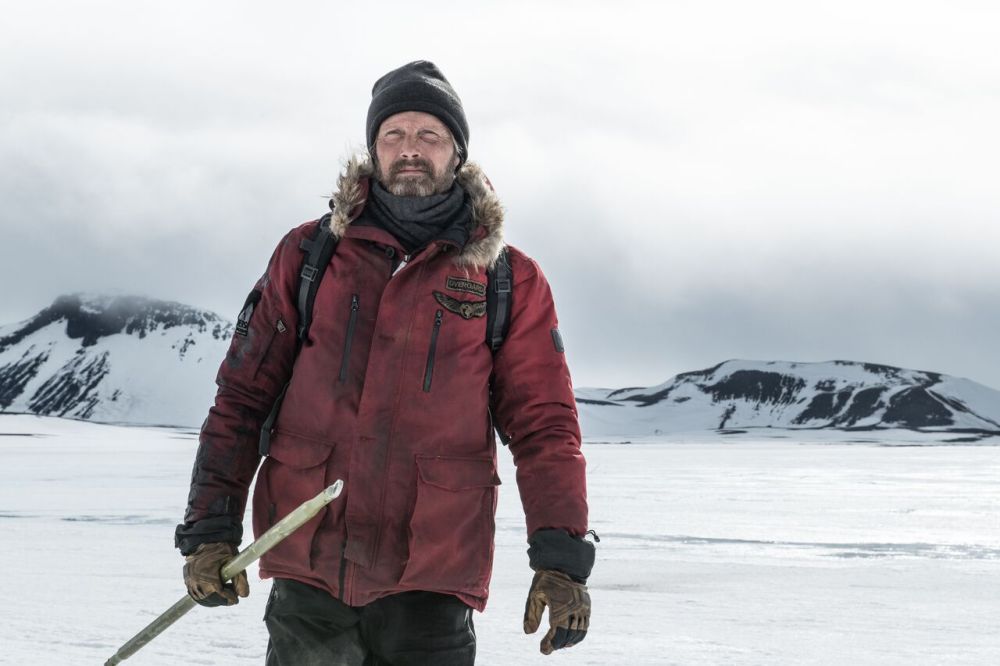 Overgard heads back to a wrecked plane,he and another man have crashed but we don’t know when but only it has been a while because Overgard has a set schedule of tasks he does. The other man has died as we Overgard come and maintain the gravemarker. We don’t why or how the plane has crashed,we only know Overgard is alive and despite his ability to sustain himself with water and raw fish,he knows with each day his hope of rescue becomes less and less likely and he is struggling with what to do.

Overgard takes a handpowered locator up to a nearby high point every night and sends out a beacon at exactly the same time every day. He spends hours hoping for someone to pick it up.
But things become a little more dangerous when Overgard spots polar bear paw prints. He is defenseless and he runs back to his shelter after seeing his stored fish have been eaten. While he knows the bear may out there,he also knows he has to send his locator signal at the same time….his desire to be rescued wins out and he goes to his place on his hill.

As he does every day,he starts to hand crank the locator when suddenly his locator is picked up and while Overgard is thrilled,he sees that a fast heavy storm is blowing in.
He hears a helicopter and the pilot,instead of turning and running,tragically attempts to land but the wind is too much and the copter crashes.Overgard rushes to help the crew,they weren’t looking for him but had responded to his beacon. The pilot is dead but the passenger,a young woman has survived but is badly hurt. Overgard treats her the best he can and takes her back to his plane,he then comes back and salvages the chopper and burying the pilot.
Looking out across the barren snow covered land,Ovegard knows he has no choice,either he attempts to hike out with the injured woman and save them both or stay put while she dies and he no closer to being rescued……. 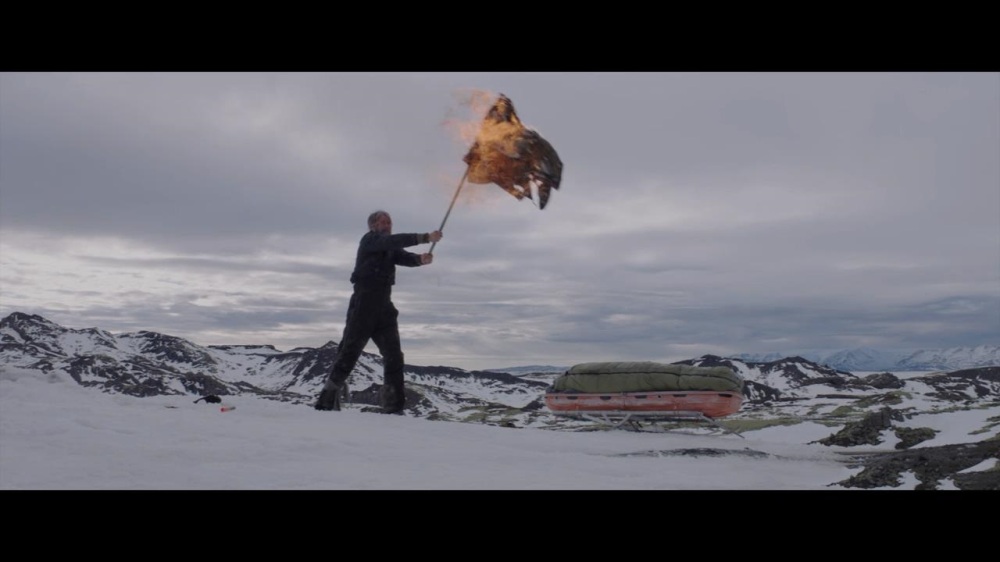 So yeah,”Arctic” is indeed pretty damn powerful and Mads Mikkelsen gives a great performance as Overgard.  There is so much to like about “Arctic” but because the movie is so completely lean and has less then 100 words of dialogue,to go indepth in discussing it would spoil it and the cheetah and I don’t do those.

I will commend Mikkelsen on what he called his toughest and most difficult shoot in his career. “Arctic” is no soundstage and green screen film,director and co-writer Joe Penna shot his film in Iceland and it is both forboding and beautiful. Shooting took 19 long days and Penna also had to import a very special co-star for his story which added a nice and realistic touch.

Penna and co-writer Ryan Morrison take a chance by dropping the viewer smack dab in the middle of the movie,we get no back story on how Overgard got there,what he was doing or who his co-pilot is. Overgard doesn’t share anything either. In many survivor movies,one character will fill his or her background to a hurt comrade for the sake of the audience,to get to know how they got there but Mikkelsen says in a 2 minute BTS clip that while he developed a backstory for Overgard,he didn’t share it as to take away from the film.
The film score by Joseph Trapanese is beautifully restrained and the sad strings tell the story about how lonely the land is,it acts as unspoken dialogue and is a character onto itself.

This is definitely a “Best of the Year” caliber of film and one you need to seek out.
“Arctic” is rated PG-13 and has a run time of 1 hr 38 minutes. Special features are skimpy and include deleted scenes.

The cheetah and I give “Arctic” two thumbs/4 paws and a tail straight up.

What survival film had you at the edge of your seat? Drop us a comment below and share!