Been sitting on the latest release from from our pals from Artsploitation Films for a while now. The cheetah and I have watched this four times (including director’s commentary) because of the ending of the film left he and I a bit divided.

Plus,this one is a bit strange because “Rondo” is a movie made right here in America and this is a first for us because everything that Artspoitation has sent us in the past has been a foreign made film. We’re not complaining because it sort of gives their films a bit of a IFC Film/Film Movement vibe and we are digging that…..but “Rondo”…..this one is really different……

Paul (Luke Sorge) is in a bad way,he has been dishonorably discharged from the army,he has a drinking problem,no jobs and no prospects. Soon he finds himself homeless and ends up sleeping on his sister’s couch. Jill (Brenna Otts) only has two rules for Paul,don’t drink and don’t smoke in the house. When she catches him doing both,she at first gets upset but when she sees just how depressed Paul is,Jill makes an appointment for Paul with a therapist she met.

Paul goes and meets the therapist who is around 8 months pregnant. But instead of asking Paul basic mental health questions,she starts asking about his sex life and says that getting laid is a therapy she believes in. She then gives Paul a card to a “underground place” along with a password that allows him entry.
Paul is a little taken back but he struggles to sleep,he decides to go to the place.
He arrives at an apartment,shares his password and is escorted up. The apartment is a normal looking and Paul meets two other men,one who is holding a box and one who is a braggart about how many women he has slept with.

Then the trio meets the host of the party,a gentleman named Lurdell,who welcomes them. He then introduces a couple,The Timms,a clearly drugged and naked young woman and her “husband”. Lurdell then explains that each man will have a turn to do whatever they want to Mrs. Timms except that it has to stay on a plastic sheet. The men sign a wavier sheet and the one with the box (which are sex toys) goes first and Paul talks to Boone,the braggert. The two share drinks and soon enough Boone’s turn comes up and he enters the room….Paul decides to smoke and goes outside.

While standing outside,he sees Boone on top of a listless and drugged Mrs. Timms,what he also sees but Boone does not is a man take a sledgehammer and kills Boone.
Paul knows he is in the wrong place and definitely the wrong time!! He barely escapes with his life but Lurdell isn’t worried,he knows where Paul lives at,he has his wavier sheet.

Paul rushes back and attempts to tell Jill what has happened,she tell him to call the cops who don’t believe him,when Paul starts getting paranoid even with Jill,she worries maybe Paul is cracking up……until Lurdell shows up to clean his tracks. Paul is killed in front of Jill who is hiding…..and thus starts a dark trail of savage revenge for Jill as she seeks justice for her brother…..and hell hath no fury like a sister on the warpath!!!

Did the cheetah and I like “Rondo”? As mentioned,this is a tough one because while I enjoy a good pulpy story as well as the next person and revenge is always a good plot device,I think writer/director Drew Barnhardt went just a tad too far and what had been a good solid tale with an excellent voice over by Steve Von Beckum as the Narrator and a wonderful performance by Otts and Reggie De Morton as Lurdell gets soured in the last scene.

When will directors wake up and realize that Quentin Taratino is a hack and someone not to emulate,especially when they crafted a fine story and one with some sly humor involved. I liked how Barnhardt set his bad guys and I wish he had established their origins just a tad more because Lurdell made for a very interesting and nost decidedly evil bad guy but yet was still “cultured” in his dress and mannerisms. De Morton brings a nice mix of ruthlessness and refinment to the roll and gives Lurdell some depth. 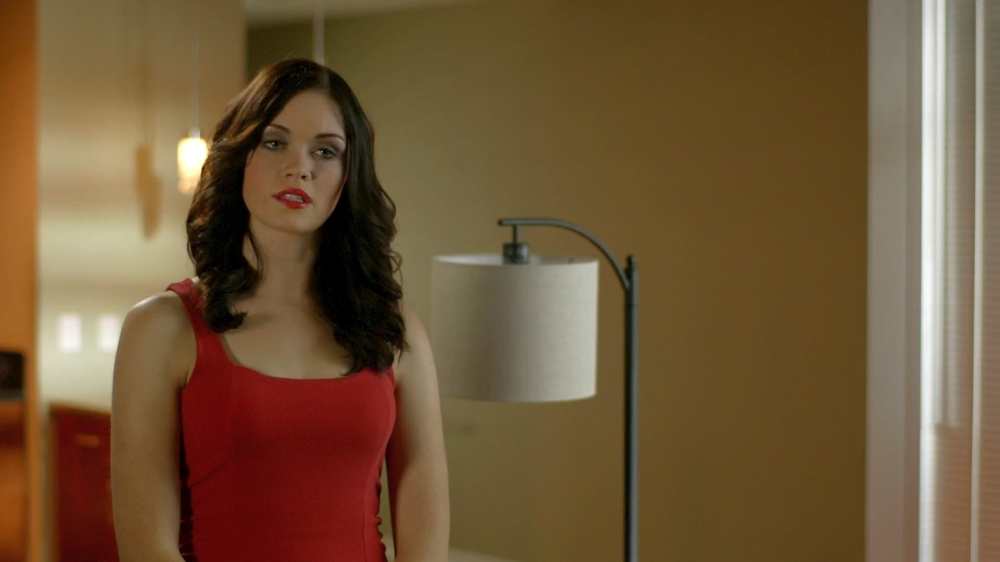 Otts,who has starred in big series like “Westworld” and “Strange Angel” is both stunning to look at but also can communicate her feelings and emotions with just a look.
Her prim and proper Jill has to grow up way too fast yet she is not only to handle it but when she takes the fight to Lurdell and his cohorts,she can do it ruthlessly and without a thought. Its a nice breakout role for Otts but for that overreach by Barnhardt. Its okay to have revenge but why have your storyteller lose her soul in the process?
The movie looks and sounds great,I thought the score by Ryan Franks and Scott Nickoley was light and bouncy and helped move “Rondo” along swiftly.

“Rondo” is unrated but would be considered NC-17 for the final scene of extreme graphic violence.  Special features include director’s commentary and deleted scenes.  The runtime is 88 minutes.

We liked 95% of “Rondo”,it was inventive,had some great music and good cast. We enjoyed this film very much but that last 5%,I hope that Barnhardt learns from that and becomes a stronger director/writer for it. It is for that reason that we gave “Rondo” two thumbs/4 paws straight down. But for those who wish to check “Rondo”,you can buy this film by visiting the Artsploitation Films website.

What movie have you watched lately that went beyond the norm in terms of violence?
Drop us a line and tell us about it….