Lately it seems I have been a bit lost in picking out something to watch and review. Its not for the lack of having something to watch (quit laughing Catfish….)but actually picking something I’m excited about.  Then again,I’m pretty excited about just about everything I find while out and about.
Maybe its just summer,that I should be out and enjoying the sunshine…which the cheetah and I do,in fact he has taken to falling asleep in his carrier and I have never heard of any feline,domestic or wild doing that….is he trying to tell me something…

As I was in the basement,suddenly a loud noise came down the stairs,the cheetah had knocked down the empty box from our last unboxing which I had kept. He flew down the stairs after it,swatted it towards me and then flopped. I took this as a sign for real this time,it was time to watch another of the goodies that our friend Pam had sent us. We had watched and reviewed “Zombie Hunter” but for today we went for what many people considered the finest anthology series ever made,”The Twilight Zone“. Now while the series has been released in its enitirety,CBS and other studios have created budget releases which are compliation boxes of well known favorites. The only place I had seen The Twilight Zone: Fan Favorites was at Cracker Barrel and there had been other shows in the same format there. For this release,CBS had included 19 of the most famous episodes (which is a bit of a stretch as pretty much the whole series is iconic).

At the time that the cheetah and I were gifted this box set,I didn’t own any Twilight Zone at all,I just hadn’t seen any for sale at my usual haunts.
Because I don’t have cable or basic TV anymore,it has been years since I have watched an episode of Twilight Zone so I was looking foward to seeing these episodes.
Its a credit to the writers that many of yesterday’s shows like The Twilight Zone or Star Trek:TOS that many of these series remain timeless,the message that creator Rod Serling wanted to tell back then are still revelant today.

The key episodes are some of the ones you expect,”Nightmare At 20,000 Feet”,”The Invaders” and “Time Enough At Last”,all considered the very best of the show. But I think “The Monsters Are Due At Maple Street” probably speaks the loudest to what is going on today,the slow dividing of America by outside forces like Russia and the Republican Party from within. “Maple Street”,aired almost 60 years ago shows what happens when a neighborhood is torn asunder by distrust and fear and which is triggered by two aliens to see what would happen.  Its a most sobering watch of a lesson unlearned. 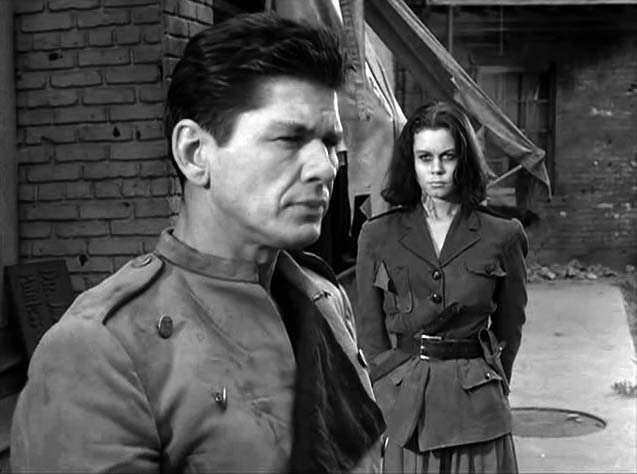 But my favorite of the 19 episodes is “Two” which features Charles Bronson and Elizabeth Montgomery as two soldiers from a war long over and with no winners,struggling to make peace with other so they can both survive. Bronson carries the dialogue and Montgomery proves she was a truly beautiful girl no matter how much the director tried to muss her up. The score for this episode was later adopted and used as the them to the CBS Mystery Theater.

Serling,like Jack Webb,was a master creator and a powerful storyteller. Sadly in the age they lived in,personal health wasn’t a big social issue and a lot of very talented people died way to soon. Serling was a heavy smoker and was often seen during his introduction with a cigarette in his hand. His health declined and Serling died after a series of heart attacks at age 50. Besides “The Twilight Zone”,Serling left us “Night Gallery” and a western called “The Loner” which starred Lloyd Bridges and ran for a single season in the 1965-66 TV season also on CBS.

While the entire The Twilight Zone series has been released,this compilation is a perfect way to introduce new viewers to the show without spending a lot of cash or limited space.
I am pretty happy to have this slice of goodness available to us and thank you again Pam for thinking of the cheetah and myself!!

Which episode of “The Twilight Zone” is your favorite? Leave a comment below and share it with us!