Its summertime and as such sometimes you just want to unplug your brain and just laugh at silliness for 90 minutes or so. So while I was thinking about this,the cheetah pads up to me and says “Yo,Family Video just priced Captain Marvel blurays,can you score us a copy so we can watch Goose (the star of the movie)?”
And that is how I found myself back at my Family Video store and also walking into another massive sale. I of course got Captain Marvel but what got me pretty amped was seeing another movie featuring our movie hero of this blog,Mr. Lochlyn Munro.  That’s right,we are big fans of all things Munro and that is how (deja vu,anyone?) we also ended up with “Benchwamers 2: Breaking Balls”. Does it matter if  we haven’t seen the first one? Yeah,I didn’t think so either….. 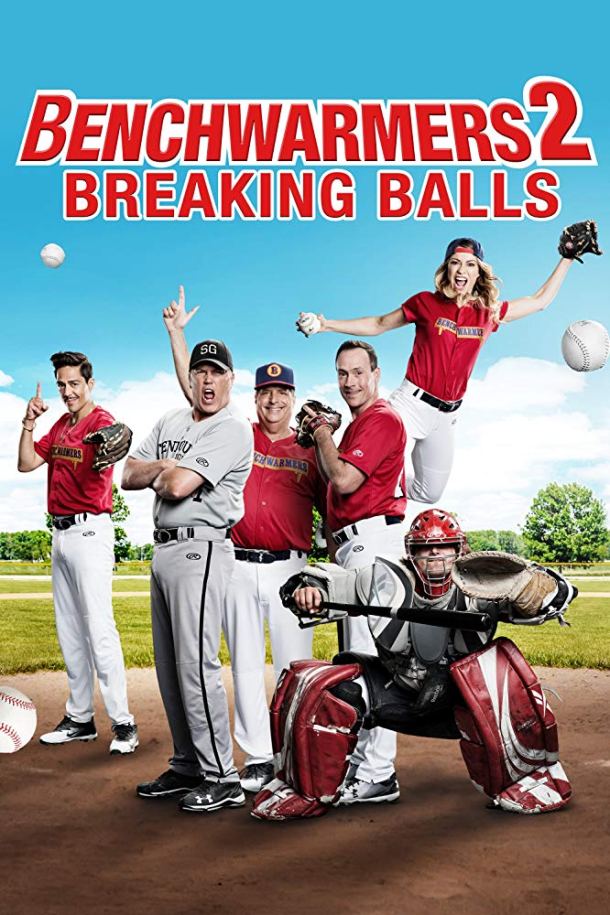 Whew,lets see if I explain this most original story….
Ben McGrath (Chris Klein) is a highly touted major league prospect who suffers a crushing injury that ends his promising career.
After his injury,everyone,including his pregnant wife,pretty much abandons him and for a few years,Ben spirals and ends up running a small lawn mowing business. But Ben,while down,hasn’t stayed down….he sobered up and got a degree in law,passed the bar and is now a new minted lawyer. Of course because he got his degree online and is also infamous for his baseball injury,he struggles to find a job.

Things suddenly brighten up when Ben gets hired by Gordon Stenhouse (Lochlyn Munro). He proudly drives over to his ex-wife’s house to share the good news and also drop off a check that will allow his son Jack to go summer math camp. Instead of handling high profile cases,Ben finds out that Stenhouse only hired him to manage the firm’s softball team,when Ben declines,Stenhouse fires him…on the first day!
Ben then meets Mel Carmichael (Jon Lovitz- the only character to return for this sequel) who gives him a job at law firm “Schmood and Ass” (yes,that is not a typo). Of course Mel’s firm is staffed by wacky and colorful stereotypes. Mel also has a softball team and he invites Ben to manage and this time he accepts. The only trouble is the team only has 5 players and Ben doesn’t play anymore.

He also gets a real case and is paired up with Annie (Chelsey Reist) to stop a sewage pump station from being built in a “quiant” little part of town. Of course Ben and Annie also slowly develop as a couple despite a secret Annie is keeping from Ben..
If you can guess that Ben’s team is full of non playing,wacky and stereotyped “benchwarmers” who end up facing Stenhouse in the big game,well of course they do.
Do Jack and Ben get closer together as father and son over the course of the season?
Is there a last minute moment of crisis that might stop Ben from coaching his team?
Is there…..of course it does…..is there a happy ending? What? Why are you even asking???

One thing I have been noticing as of late while looking at all the new releases,it seems that Universal/Comcast is battling Lionsgate for the direct-to-video market. Universal Pictures Home Entertainment – UPHE has been very active in releasing several new movies a month,some are damn good and I have reviewed them here while others are pure shit and I have baited my pal Catfish to take them off my hands. 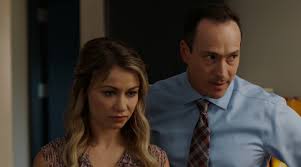 While I’m sure the biggest question is why after 13 years,UPHE made a sequel to a film no one talks about? Because UPHE has discovered by releasing other DTV films related to several of its franchises like “Death Race”,The Scorpion King” and “Jarhead” among others,that there IS a audience looking for familar faces and titles. So they make several small budgeted films and feed the beast that is DTV.  They follow a smart model,take an established film franchise,add a couple of actors with ties to the series and add fresh/well known but not expensive faces and start churning them out.
But the question you all are dying to know: Is “Benchwarmers 2” any good? Yeah,it was far better then it had a right to be but credit has to go to the casting. Starting with Chris Klein who has turned into a very dependable B-level leading man. He works hard,stays in shape and gives solid performances in just about everything.

Lochlyn Munro looks like he is having a BALL and as a viewer,when it appears a actor is really having a good time in just being on a movie set,it makes the movie all that more enjoyable. His Stenhouse is the heavy but he also delievers a lot of the laughs. Another stellar performance from our patron saint…..

The same can be said for one of my favorite actresses and after 351 reviews,I can finally say I get to talk about her and that is Crystal Lowe. Fan boys know her as a “Scream queen” and Hallmark fans know her as Rita Haywith on the “Signed,Sealed,Delivered” films. While her role as “Ramona” pokes fun at her “Rita” character,I got to say this. To all casting directors: You need to start casting Crystal in the leading lady roles,she has the chops and the looks and why she is stuck doing these types of roles is baffling. She can handle a LOT more weight then what she is stuck doing.
Jon Lovitz was funny in playing Mel Carmichael,he wasn’t over the top as he usually is.
While it was a small role,it was nice to see Karen Holness,a staple on Hallmark movies,get a chance to shine playing Iris,a lawyer who tried to help Ben.
The direction by Jon Rosenbaum was competent and the film looks okay.

“Benchwarmers 2” is rated PG-13 and has a run time of 91 minutes. It has no special features.

The cheetah and I gave this film a big thumbs/paw straight up. Its a perfect movie to unplug from life and enjoy some laughs with.