Opened up my mail and saw this new press release from our pals at Mill Creek Entertainment. I can’t tell you how cool this news is and for anyone who has watched a monster movie or Japanese anime or any of the Power Rangers series,Ultraman is a must have for yours or anyone you know who loves a good old fashion kaiju battle! I know the cheetah and I are ready for these releases which are finally hitting the United States.

ULTRAMAN ORB and ULTRAMAN GEED are Slated for Blu-ray Release on November 19 – ULTRASEVEN SteelBook® and Standard Blu-ray releasing on December 10!

Minneapolis, MN (September 11, 2019) Mill Creek Entertainment is pleased to announce the next group of releases from the Ultraman superhero library recently licensed from Tsuburaya Productions Co., Ltd for North American home entertainment distribution.  ULTRAMAN ORB and ULTRAMAN GEED will be making their North American debut as Blu-ray combo packs that include the complete series and subsequent feature films that concluded each respective storyline for $39.98 each on November 19, 2019. The 1967 series ULTRASEVEN will also be making its Blu-ray debut in limited edition SteelBook® packaging for $49.98 and a standard Blu-ray release will also be made available for $39.98 on December 10, 2019.

ULTRASEVEN is the third entry in the Ultra Series, featuring the colossal monsters and spectacular visual effects the Tsuburaya team is known for.  The show premiered in October of 1967 to rave reviews and appealing to a wider, adult audience with a greater emphasis placed on alien threats and social issues that were not as clear-cut as good and evil.  ULTRASEVEN proved there was a winning formula with a more cerebral series that questioned the actions of the Ultra Heroes as they fought against giant monsters and alien hordes bent on human domination.  The SteelBook® and standard Blu-ray releases of ULTRASEVEN will each contain stunning high definition video for 48 half-hour episodes with DTS-HD Master Audio of the original Japanese soundtrack with English subtitles. Digital redemption will also be available via Mill Creek Entertainment’s streaming service, movieSPREE.

ULTRAMAN ORB was originally released in 2016 in commemoration of the 50th anniversary of Ultraman and the 20th anniversary of the franchise’s relaunch with ULTRAMAN TIGA. The series stars Hideo Ishiguro as Gai Kurenai (ULTRAMAN ORB, “The Warrior of Light”), who calls upon the power of previous Ultra Heroes via a device called the Orb Ring to fight Demon King Beasts released by the mysterious Jugglus Juggler after they were sealed away by Ultra Warriors long ago.  Also included with the complete, 25-episode series is the theatrical feature film ULTRAMAN ORB: THE MOVIE – LET ME BORROW THE POWER OF BONDS!  The titular hero joins forces with Ultraman Zero and Ultraseven to rescue the “New Generation Heroes” Ultraman Ginga, Ultraman Victory and Ultraman X and prevent an unprecedented global crisis.

ULTRAMAN GEED is the story of a young Ultra Warrior who carries the DNA of an infamous father, the evil Ultraman Belial, but fights his fate to become a hero of justice.  This 25-episode series also includes the top-grossing feature ULTRAMAN GEED: THE MOVIE – CONNECT THE WISHES!  With Earth about to be swallowed up in the cyber subdimension and annihilated, the power of “wishes” will cause Geed to undergo a further transformation and fight against an alien force threatening intelligent life across the universe.

The classic ULTRAMAN live television series of the 1960s and 70s, produced by Tsuburaya Productions, established new heights of quality adventure and special effects-driven entertainment and built a worldwide audience for the property. Hailing from the distant Nebula M78, Ultraman is a sleek silvery being who protects Earth and the human race from an endless array of invading aliens and terrifying monsters together with the crew of the Earth-based defense force using advanced high-tech weapons and vehicles. Ultraman battles monsters that cause endless mayhem and destruction on Earth. With the ability to extend his height to over 150 feet, Ultraman melds with a human and only emerges in times of extreme danger to save people and the Earth. The popularity of Ultraman—and the aliens and monsters– has enabled the series to persist to this day.

Mill Creek Entertainment has established itself as the leading independent home entertainment studio in North America. From special edition Complete TV Series releases including The Shield,Married…With Children, and Roseanne, to special edition SteelBook® release of Mothra and an entire lineup of Retro VHS-style movies on Blu-ray, Mill Creek’s extensive catalog contains both mainstream and cult entertainment offerings that have exceeded performance expectations at retail despite the declining packaged media industry reports.

In the Age of Interplanetary Wars, Earth is in danger from those who would threaten its very existence. From their massive underground complex near Mt. Fuji the Ultra Guard, an elite unit of the Terrestrial Defense Force, stands vigilant as our decisive first-line of defense. But unbeknownst to his teammates, Dan Moroboshi is secretly an extraterrestrial aiding them in their fight to preserve the future of humanity. Dubbed Ultraseven, he aides the Ultra Guard in fighting back alien hordes that would doom the world to conquest.

A far greater threat emerges, though, as Ultraseven sees the consequences of his power: can he maintain his soul in the face of constant violence, even when that is necessary to protect his newfound friends?

Watch a 10 minute preview of the first Ultraseven episode in HD! 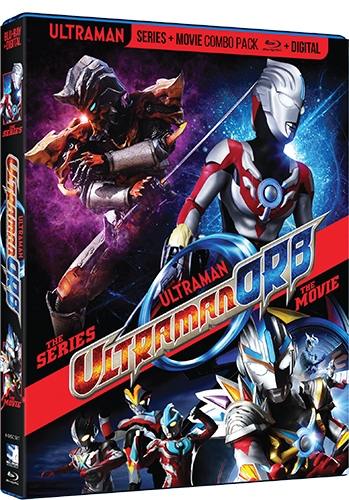 Naomi has had the same strange dream since she was young: visions of a giant of light battling a giant monster. With her interest sparked by those dreams, she starts the paranormal phenomena tracking website called “SSP” with her friends Jetta and Shin. One day the trio is on the tail of a mysterious animal suspected of causing strange meteorological activity. They encounter the Cyclone Lord Monster, Maga-Basser!  Naomi is blasted vicious winds but rescued by the vagabond, Gai Kuernai. By using his Orb Ring, Gai is able to Fusion Up into a warrior of light from a distant galaxy, Ultraman Orb!

ULTRAMAN ORB – THE MOVIE – Let Me Borrow The Power of Bonds!

A mysterious item is delivered to paranormal investigators SSP.  SSP members Naomi, Jetta and Shin determine that it is a transformation device… the X Devizer that housed Ultraman X both during and after his merging with Xio agent Daichi Oozora (Kensuke Takahashi). Gai Kurenai (Hideo Ishiguro), the human form of Ultraman Orb returns from his wanderings to search for X… unaware that this is just the first sign of a new threat to the Earth.  The villainous space witch Murnau has allied with Ultraman Orb’s arch enemy Jugglus Juggler to use the Dark Ring she now possesses.

Watch a 10 minute preview of the first Ultraman Orb episode in HD!

This is a story of a hero who inherits Ultraman Belial, the evil Ultraman’s genes.  Despite suffering from repeating setbacks and despair of knowing the secret of his birth and cruel fate, he never loses sight of friendship and strong will to become a true hero.  The story unfolds through the spiritual growth of the protagonist who seeks for the meaning of his own life and finds the place where he belongs, through fighting against evil and his own cursed destiny, to become a hero of justice
ULTRAMAN GEED – THE MOVIE – Connect the Wishes

Gigantic Mechanical Brain Gillvalis and the Galactron Army, intent on wiping out all intelligent lifeforms in the universe, close in on Earth. Riku Asakura heads for Okinawa, where there are said to be clues to the “Red Steel” sought by Gilbaris. There, Riku encounters Ail, who realizes that he is Ultraman and assigns him an important mission. Meanwhile, the Galactron Army begins attacking Okinawa
in search of the “Red Steel”. Ultraman Geed, Orb, and Zero rush to Earth, but Geed’s hasty actions in sticking to his mission put the Ultraman team in even more danger!

Watch a 10 minute preview of the first Ultraman Geed episode in HD!