As September slowly comes to an end,the cheetah and I get a little jazzed up because it means Halloween is upon us at last. See here in our world,every day in October is Halloween as we see a massive influx of horror films being released to the home market and that is especially true for indie horror.

What better company then our pals over at Wild Eye Releasing to go to when you’re craving some indie horror. They release a ton of different horror from all over the world and it was through them that we found our latest film,”The Baylock Residence”.
With the tagline “The dead are restless”,what could possibly go wrong,right?

So here is where once again,I lay out the story with and describe what is going on up to a point as to not spoil the movie. I then break down some of the action,the stars of the film…talk about the film’s writer and director. You know,a basic solid review from a 17 pound pound cheetah and myself.
This is what I got from “The Baylock Residence”….it takes in place in June of 1944 in the United Kingdom. Patricia Woodhouse (Kelly Goudie) has learned of her sister Susanna Baylock’s passing and that she left Patricia her home. Patricia arrives at the home and meets Annabelle Blair (Sarah Wynne Kordas) who was Susanna’s maid. 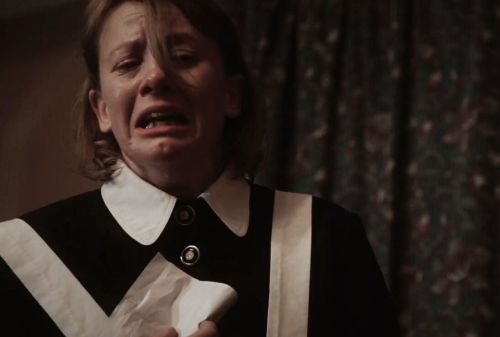 Annabelle tells Patricia that she is leaving but Patricia asks her to stay. Several weird things begin to happen and they may be tied to a man named Victor whom both sisters were intimate with at one time..this caused a rift between Patricia and Susanna.
Things go bump in the night,Patricia is constantly dreaming of weird events and when she tells Annabelle,all the maid does is tell Patricia “you need to get some rest” (which she repeats about 10 times).
I looked over at Paladin and he has checked out,he is sleeping with both paws over his head….I try and stay with this movie a while longer trying to make sense of what the hell is going on and failing terribly. The movie gets more and more lost in itself,poor writer-director Anthony Winson has written himself into a old fashioned phone booth with no way out. “The Baylock Residence” finally ends and we are out finally of our viewing misery.

We have watched a lot of films,some excellent,some godawful but never one more lost.
There was absolutely no direction or story here to tell and it makes for a very long 90 minutes,let me tell you. Now here is the kicker….Winson had directed a alternate ending which is included in the special features and it WORKED!! It needed a little fleshing out but the ending would have made sense and saved this film. Instead two very game and determined performances by Goudie and Kordas are wasted. Goudie is a very interesting looking actress,you can’t tell if she is in her early 20s or 40s. She is delightful to listen to when she is speaking and I was really charmed by her. And Kordas as Annabelle was equally game even if she forgot that she was supposed to be hobbled and using a cane.
Both actresses deserved a lot better then this and I applaud them for working very hard.
Both ladies did their best with the confusing furball of a “script” Winson gave them.
I could go on with other issues with this movie but why bother? Winson has remade this same damn movie three times and the one thing the cheetah and I wanted to shout was “MOVE ON ANTHONY,MOVE ON!!”

“The Baylock Residence” is unrated but could be rated PG and has a run time of 90 minutes. Special features include a “Making of….”featurette.
One thing I have to note….Wild Eye has reworked how they do trailers for their upcoming releases,instead of quick cuts over generic “scary”music,the trailers unfold more smoothly and the music used is more toned down. I really liked this new approach and hope it stays.
If you are interested in buying “The Baylock Residence”,you can get a copy on the website of Wild Eye Releasing.

The cheetah and I gave this the Seattle Superstorm treatment.

Feel free to drop a comment below on a movie that has left you confused.