Last night the cheetah and I were relaxing when suddenly he tapped my leg,nodded his head and headed towards the basement. I knew that meant he wanted to watch a movie so down we went so we could pick one out.
The way we do this is I pick three movies,lay them down in a row and whatever movie he either sniffs or pokes is the one we watch. I was feeling like an action film so I selected “The Transporter Refueled”,”Next” and “Redemption” of which the cheetah picked “The Transporter Refueled”. So we watched that and thought Ray Stevenson kicked much ass but Ed Skrein is no Jason Statham.
So we decided to watch “Redemption” today because lo and behold,it DOES have Jason Statham and we’re down with that!!

The film opens with a British SAS team in Helmond Province,Afghanistan on patrol when its APC is riddled with machine gun which kills five SAS right in from of Joey Jones’s (Statham) eyes. Jones then proceeds to get out of his badly shot up APC and grabs the first man he sees and starts marching him down the street unaware that British drones are watching him…..
A year later,its Feburary in London and a Mutt and Jeff (one big guy,one weasel) are rousting a homeless encampment in a alley,looking for drugs and cash. A young named Isobel implores Joey not to fight back. Isobel then leaves the tent where as Mutt holds a knife on her until Joey pops out and attacks Jeff. But Joey is hung over and malnourished from being on the streets and while he is wickedly beaten,he buys enough time for Isobel to escape. Joey also manages to barely escape but Jeff is chasing him hard. Joey heads up a flight of stairs and manages to literally fall into his pursuer by climbing through a roof window.

Joey wakes up and sees he has stumbled into a very nice loft apartment and (and as luck would have it) not only is owner gone til October but he also wears the same size of clothes as Joey.  When Joey learns that the owner of the home is gone,he manages to score a new debit card (PIN included!!) out of the mail that has been delivered.
Joey gets dressed and then gets hammered and stumbles his way to soup kitchen run by Sister Cristina (Agata Buzek) who tells him “No Alcohol”,Joey respects that and puts away his booze,he isn’t there for food,he is looking for Isobel but Cristina says she has stopped coming. Joey leaves a wad of cash with Sister Cristina and stumbles away. He
What Joey doesn’t know is that Mutt and Jeff have Isobel and have turned her into a hooker,Joey has put signs up telling her to call him at the apartment’s number. Isobel is forced to leave a message saying she has left London and is headed north.
Isobel is shown being picked by a well dressed man and the scene changes….
Joey is nearly busted by the neighbors who have noticed his coming and goings. Joey deflects attention by say he Damon’s (the apt owner) boyfriend. He also knows he can’t use Damon’s debit card anymore so he gets a job washing dishes at a Chinese resturant.
Joey has quit drinking at Sister Cristina’s request and while his PTSD is quite brutal,Joey starts taking care of himself so when there is trouble with a bunch of football supportors,Joey helps them see the errors of their ways.

This earns his the attention of the owner Mr. Choy (Benedict Wong) who offers Joey a different job as a driver (!!) and enforcer. Soon Joey is making a LOT of money which he keeps cool in the fridge. He also buys his friends in the alley pizza and Chinese food and destroys Mutt and Jeff when they try and roust the alley. Joey and Sister Cristina start to get a little closer but when she tells Joey that Isobel was founded murdered in the Thames,he loses his temper and says that all the homeless folks want is their lives back.
Joey arranges to “accidently” run into his ex-wife who has also fallen on hard times after Joey dropped out of sight and she rages at him until he passes on a thick roll of cash and promising more. 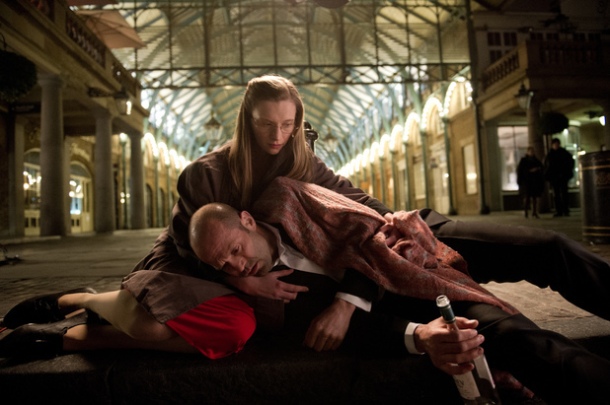 Joey invites Sister Cristina out to an event and says he has info on who killed Isobel and he wants Cristina to pass it to the cops,she dreeses up in a red dress Joey bought her and then gets a little tipsy. They are almost busted by someone who really knows Damon and they run…

But the cops are learning about this new player in Mr. Choy’s employee and the circle starts to tighten. Joey is chasing Isobel killer and he continues to work him until he sees a certain delivery. Meanwhile Sister Cristina is ashamed and worried about her relationship with Joey and asks to be placed in a new mission,out of the UK.
Things are rushing forward as two damaged souls are seeking one chance for redemption before time runs out.

This is one of the best performances that Jason Statham has given. His Joey is bruised,battered and broken,this is the most vunerable and human that I have seen Statham look in a film. Sure he has a couple of fight scenes but he shows real emotional depth here too. This is by no accident,credit has to go director-writer Steven Knight. Knight is not only a good director but his writing is some of the best material you’ll hear.
He brings great performances out of his actors because he writes scripts that make sense.
Watching Statham show emotions like grief,regret,loss and hopelessness highlights just how far he had grown as an actor in 2013. It also makes it more sad that he is back doing mindless shit like “Hobbs and Shaw”. What a waste.

This was my first time watching Buzek act and I thought she did a great job as well as Sister Cristina,a woman truly in conflict with herself and her faith. I admired the fact that they didn’t Hollywood up her but kept her pretty but grounded. I thought the chemistry between Statham and Buzek was very good and very moving in the end.

“Redemption” (or Hummingbird as it was called in the UK) runs for 1 hour and 40 minutes and is rated “R”. The special features are thin with just one 5 minute featurette and trailers from other Lionsgate films.

The cheetah and I both gave “Redemption” a thumbs/paw straight up.

What is your favorite Jason Statham film? If you say “Hobbs and Shaw”,I’m sending the cheetah way…..without the fingernail clippers.