When I got a small package from TriCoast recently,not only did I get a kick ass documentary,I also got a film called “The Mighty Kong“. Because Warner Brothers is releasing “Kong vs. Godzilla” in 2020,I thought this was another documentary about the famed ape and all of his films,I whistled down the cheetah and we settled in to check it out. 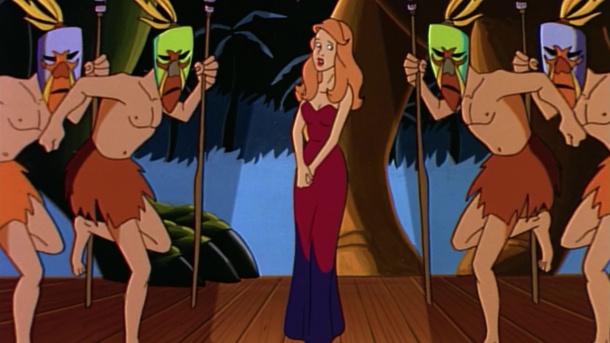 Well….what we got was a animated 70 minute movie from 1998. A movie that I don’t think anyone saw nor cared about. It does tell the story of King Kong and the era is right.
But being how this was a “family friendly” film,well no one dies,not even Kong even after he is shot of the Empire State Building,he survives not only the machine gun bullets but the long ass fall as well. Hey,its a family friendly film,remember?

And being this is a watered down version,”The Mighty Kong” is also…..wait for it……a MUSICAL as well! No,seriously,it is…..it even has the late great Dudley Moore starring as Carl Denham AND also as KONG!!! The chills and thrills just kept on coming with this one. It was only because I just started watching “Monk” for the first time that I even knew who Jason Gray-Stanford was…but yeah,he’s in this movie as well playing “Ricky”.
As we’re sitting here watching this poorly rendered cartoon,many questions were running through my mind….that somehow I had pissed our new pal Jenna off and she sent this as revenge,why a 21 year old cartoon that no one cares about much less is even remembered is getting a PR push and I need to show Paladin the movie “10”.
The ONLY thing I can recommend about “The Mighty Kong” is if you’re a Dudley Moore fan and are looking to complete your film collection of his career and that is it. This was the final film of his career as he passed in 2002. But that is it…..

“The Mighty Kong” is rated PG and has a run time of 71 minutes.  It is now available on DVD.

The cheetah tossed up a furball and I gave this a thumbs down as well. And Jenna,whatever we did,we’re sorry!!!

So you have winning between King Kong and Godzilla in 2020? We’re hoping that as they are fighting,Raleigh Beckett and the Gipsy Danger come out of the Breach to join the throwdown……