The cheetah approached me while I was working on some our latest interviews and commented that we haven’t reviewed anything in about a month and that we needed to address that.
Of course he is right and so I suggested that we watch something from our latest Dollar Tree sale. I went to the “to watch” box and fished out “Aim High”. The cheetah nodded and away we went.

Now this was very different to what we normally watch. “Aim High” was released in 2011 as a web-based series. Each episode lasts between 7-9 minutes long and the first season has six webisodes.
The premise is that high school junior Nick Green is a your normal student. He struggles in the class room,likes a girl that is dating the big shot jock and only has one close friend. 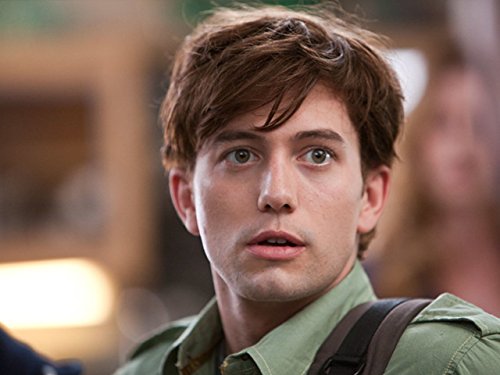 But Nick (Jackson Rathbone) also has a other darker side,he is also a expert assassin for the U.S. government and often spends his nights on missions,this of course affects his class work. He gets his missions from his handler,who also happens to be the vice-principal of his school.

While Nick has a thing for rocker chick Amanda Miles (Aimee Teegarden),he has to dodge the adavnces of his psychics teacher Ms. Walker (Rebecca Mader). His one friend is Marcus Anderson (Johnny Pemberton) who accidently discovers Nick’s secret and saves his own life by sharing his own secret with Nick.

Of course because he has to keep his cover,Nick has let Amanda’s jealous boyfriend pound on him which includes having his head put in a toilet. But it doesn’t stop Amanda and Nick from becoming friends.
The simple plot arc for the first season sees Nick crippling a drug cartel in the first episode but one of the bad guys takes his picture which Nick doesn’t realize. He also has to recover a package from a highly skilled Russian agent Boris (the always awesome Clancy Brown) who wants his package and revenge on Nick. Nick is caught between the two forces in the season’s last episode and in order to save not only himself but Amanda,he is going to have show his true abilities…….

“Aim High” which was released on the Warner Premiere label,was a oustanding concept. While it appears to be a light teen oriented comedy,it isn’t….this is a VERY adult and funny show with a lot of action and violence. Produced by mega-producer McG,”Aim High” has a great look,the cast is really good. Having Rathbone break the 4th wall as Nick explains what his life is like was a stroke of genius.  Thor Freudenthal’s direction is tight and keeps the action going but also allows for some deft comedy  bits.

After the first season in 2011,”Aim High” didn’t return until 2013 with an expanded 10 episode season. Its a real shame this concept wasn’t tranferred to a TV show or even a direct-to-video film series,it had the potential to be great and it deserved a better fate then what it got.

“Aim High” consists of 6 episodes and has a run time of 57 minutes. It should be considered a “R” rating for content.
The cheetah and I gave “Aim High” two thumbs and two paws straight up.

What unexpected treasure have you found at a Dollar Tree movie sale? Leave a comment below!!