I was tossing and turning last night something awful and I decided to get up and watch something on the BluRay player. I was in the mood for something light and fluffy,I didn’t want to use my brain as I was hoping to sleep soon.
As I was spinning through a box of films,I ran across a film I had picked up from the library that is still closed. I enjoy watching stand-up comedy and so I selected a old concert from a comic whose name I have only heard but never have actually watch and that is Jim Gaffigan.

This comedy concert film was filmed at The Old Vic Theater in Chicago in 2005.
Not knowing what to expect,I inserted the disc in and settled back to watch “Beyond the Pale”.
All I can say after watching Gaffigan’s set was I sure as hell he improved his stand-up WAAAAAAY beyond what I watched last night. I guess Gaffigan’s big “gimmick”is that he does what he calls his “inside voice” where after he tells a joke,he whispers what an audience member would potential say in response to said joke.

It was cute the 3-4 times he did it but after that,it got old really fast. Quite honestly,15 minutes into this comedy concert,I was looking to get out but I stuck with it. Gaffigan,while being a clean comic (he only said 3 curse words in 72 minutes) is also a boring one in Beyond the Pale. His set was 80% about food and I am not kidding when I say I only laughed once when he talked about Cinnabon and the need to take a nap after eating one,he was spot on about that.
But that was it and that brings me to the major problem of this film and it wasn’t Gaffigan’s fault entirely but piping a laugh track in and editing the crowd showing them laugh at every single joke,well that was beyond tacky.

Believe me,this may have had 4-5 chuckles and 1-2 out loud laughs but it wasn’t funny,in fact,it was stone cold boring across the board.  I am glad Jim has evolved his career into TV and films because I really don’t understand how he made it as a stand-up comedian. That being said,I am going to look for another of his performances and see if he ever got as funny as he was when he started out back in New York in 1991. 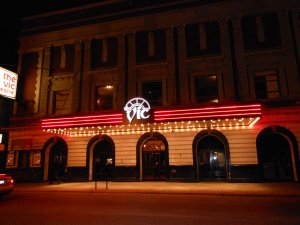 “Beyond the Pale” has a run time of 72 minutes and I would give this a “PG” rating. Special features include Jim’s stand-up debut and a couple of sketches of him getting ready for his show and finding the hotel he is supposed to be in.

The cheetah was upstairs when I watched this so he doesn’t have any opinion while I gave this a thumbs down for being boring and having a laugh track.

The cheetah and I like stand-up comedy,here are a few reviews we have done: