It never ceases to amaze me on how the cheetah and I stumble across the films we review. While some are sent directly to us,or we find them in a yard sale,video store or gifted,I like the ones we just stumble across randomly.
Like “Unicorns” for example…..never heard a peep about this short film and probably would never have watched it had it not been for watching another short film called “Pamela & Ivy“which was written and directed by Leah McKendrick. It was because we reviewed that film that we followed Leah on IG and saw her post about “Unicorns”which Leah had written and is now being shown at various festivals.

“Unicorns” is the story of Elise (Hilary Curwen) who is hanging on to life by a very thin line and as this film opens,that line for Elise has frayed and she is about done for this world. Only someone repeatedly knocking at her door spares her .
We don’t know what has brought Elise to this point but looking at her apartment,we get hints of what is going on.
When Elise opens the door,she sees her friend Marlon (Malik Yoba). Elise bravely puts on a face and invites him in. It seems Marlon is part of a support group for people who not only depressed but also have survived an attempted suicide.
After Elise convinces Marlon (somewhat) she is doing okay,he asks her to have a talk with a young teenager named Jonah (Markess Christmas) who isn’t doing very well. Despite Elise’s misgivings,Marlon introduces Jonah to Elise and things start to get a little wonky……

I loved this movie on so many levels. This 15 minute short film is beautifully written,directed and acted. Curwen is so perfectly as Elise,she gives the chraracter such rich emotional depth and to do so in a short film really speaks of her talent and range. Curwen hits the floor running in her very first scene and is locked in. We also get an idea of what has gotten her to her point in life if the viewer really listens to her.

Markees Christmas as Jonah is almost equally as good and the “almost” is because he doesn’t have same screen time as Curwen has. Christmas was unknown me but when I went to his IMDb page,I saw that he had done a film that I have seen at my local video store,”Morris From America”. This young man is also incredibly talented and his Jonah is something you NEVER see onscreen,a young black teenager mental and emotions being dealt with via counseling. While it soon becomes clear that Elise is over her head,the scene of itself is fresh and rings true. Jonah wants help and he doesn’t put on the stereotypical “street tough” persona we’re so used to seeing (again,brilliant writing by McKendrick). 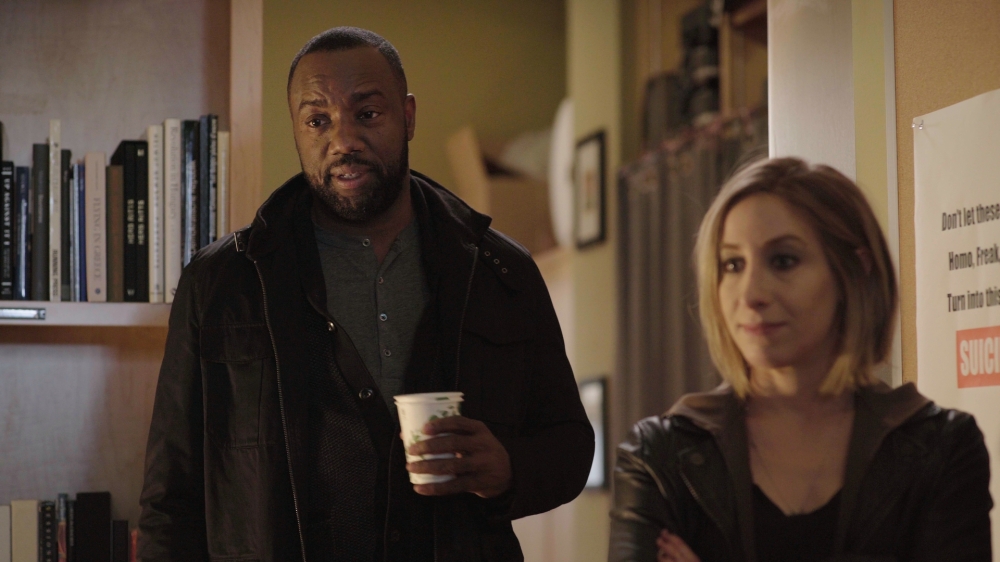 It was nice seeing Malik Yoba onscreen as well….may folks will recognize him from his long run on the series “New York Undercover”. His Marlon is the catalyst that brings Elise and Jonah together and he is wiser then Elise gives him credit for.
Of course you need a good directer to pull this together and Candice Carella,who started her Hollywood career in Costumes and Wardrobe,has done a excellent job with “Unicorns”. The best thing she did in my opinion is give Curwen the space to bring Elise to life. A lot of new directors tend to over direct and be “perfect” but Carella knows she has a excellent script and actors and just firmly guides them down the road.

This is a very impressive short film about a very tough topic and this is one of the best films we have seen this year.

“Unicorns” has a run time of 15 minutes and should be considered “R” for language.

If you are feeling suicidal and feel like self-harming,you can call the National Suicide Prevention Hotline.