As we are rolling into December and Christmas time,Paladin and I both agreed we should post a couple of Christmas themed reviews. While Christmas is a normally big wave time for me,I found myself watching Christmas movies and taking comfort from them.
We have reviewed our fair share of Christmas films in the past and we’re hoping Family Video will stock 4-5 Hallmark Channels releases as they normally do in December. Of course that means we have to wait til January before being able to purchase them but it doesn’t matter. See,Christmas movies are all year round now,its quite alright to post a Christmas movie review in April or August,folks will come and read them…
But this year we decided to do something a bit different and take a look at the Christmas episodes of the sitcom “Sabrina The Teenage Witch” which starred Melissa Joan Hart. The show ran for 7 years,from 1996 to 2003-4 years on ABC as part of the TGIF comedy block and the last 3 years on The WB,ending in 2003.
I know what you’re going to ask and yes,I did. I did indeed watch Sabrina for two reasons…Nick Bakay who starred as the voice of Salem,Sabrina’s pet cat and was also her familiar. Salem was the funniest character on the show and was always causing shenanigans. But the big reason I liked watching the show was Beth Broderick who played Sabrina’s wise Aunt Zelda. Not only was Zelda smart as a whip,she was drop dead beautiful and I think she added a whole of adult males to watching the show.
Now I didn’t very many episodes because at night but always liked the show when I could watch it.
The funny thing about Sabrina was the cast was forever changing,one season you would meet Sabrina’s best friend and half way through the season,they would be gone without a trace.
But I digress….a couple of months ago during one of the Dollar Tree sales,I spotted this compilation of Christmas shows from Sabrina and decided to pick it up. I have to say,the compilation was a lot better then I thought and pretty surprising as well. When figuring out what to write about for Christmas,I thought this would be an ideal choice. I’ll share a few thoughts about each episode as we make our way through these Christmas shows.

1. “A Girl and Her Cat”
It is Christmas time and Sabrina is excited to meet her boyfriend Harvey and exchange presents. But she is furious when she discovers that Salem has used her favorite holiday sweater as a scratching post.
Sabrina wants Salem to apologize and Salem wants to go with Sabrina. When she says “No”,Salem sneaks out in her backpack. The bickering leads to Salem being abandoned and injured by a young boy who decides to keep Salem as his cat.

Interesting first Christmas episode…Zelda wants to have a mortal Christmas while Aunt Hilda (Caroline Rhea) just wants to use magic. The only question I had was why didn’t Sabrina just didn’t use magic to fix her sweater in the first place?

2.  “Sabrina Claus”
When Sabrina gets a case “Egotitis” because of all the presents she wants end up being taken from other people,Zelda and Hilda turn to the infamous “Bob”in a last ditch effort to help Sabrina rediscover what the spirit of Christmas really means.

This was a real fun episode which features special guests Johnny Mathis and John Ratzenberger as Bob.

3. “Christmas Amnesia”
Sabrina attends a pretty swanky party in the Other Realm (where magical beings live) and in the process accidently erases Christmas here on Earth. Now she has to fix it and do it quickly before Christmas is forgotten forever.

Another fun episode and by season three,the cast had really jelled. Melissa Joan Hart is very comfortable playing Sabrina. Of course Salem continues to be the funniest character on the show.
Daveigh Chase,who scared millions in the horror classic “The Ring”,made her TV debut on this episode. 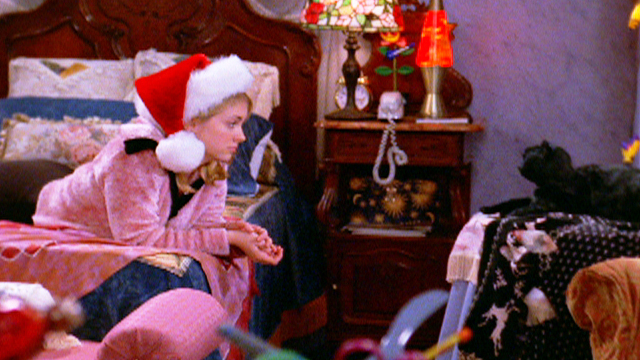 4.  “Sabrina Nipping At Your Nose”
The 4th season saw Sabrina Spellman turn 18 but she is still learning how to be a good witch.
For this episode,the Spellman’s are caught in a heavy snowstorm in their town. When Hilda wins a week of fun and sun in Jamaica,it looks like an exciting week. But the snow may not let them leave so Salem talks Sabrina in tampering with the weather which doesn’t make Mother Nature very happy……

This continued Sabrina’s run of very cute Christmas shows and highlights the chemistry between
Melissa Joan Hart and Nick Bakay.

Special guest star Danny Bonaduce of “The Partridge Family” plays himself in this episode.

5. “Sabrina’s Perfect Christmas”
Now that Sabrina is in college and a young adult,as well as on a different network,the story lines
got a shade more darker and edgier. In this Christmas episode,tired of having Christmas with her aunts and a loud house,Sabrina chooses to accept an invite from her college friend Morgan (Elisa Donovan) to spend the holiday with Morgan’s perfect family.
Sabrina finds out that the grass over the mountain isn’t always greener or better and sees that her house may be loud but also filled with love.

This wasn’t was your usual Sabrina Christmas episode,catching a glimpse into her friend’s home life was pretty sobering as
the family that seemed perfect on the outside had some serious issues within and made the viewers look at Morgan in a whole new light.

This episode was directed by Anson Williams who played “Potsie” on “Happy Days”.

The last Christmas episode takes played in the 7th and last season of the series. Directed by Melissa Joan Hart,the story finds
Sabrina,Morgan and Roxie (Moon Soleil Frye) in Miami for Christmas where Roxie runs into her estranged mother Candy (Kate Jackson). Candy,we find out,is a ex-felon who has missed pretty much Roxie’s life. Sabrina and Morgan try to encourage some sort of middle ground but when a theft happens at the hotel everyone is staying at,it looks like Candy is up to her old tricks. 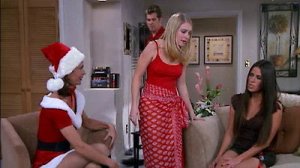 This was easily the most dark episode of any Sabrina episodes as we finally get to see why Roxie has been so bitter during her entire stint on the show. Frye’s Roxie was a cloud of doom and gloom and while she often dropped hints about her lack of a childhood and her mom being in prison,we get to see first hand why Roxie was the way she turned out. The episode ends with hopefully a small step towards a mother-daughter understanding.

While the first four episodes where fun and fluffy for the most part,I was really impressed with the last two. I thought showing Sabrina acting more like a “mortal” and handling her life as such was a good idea and that even comic book chraracter driven shows could be done in an adult fashion. 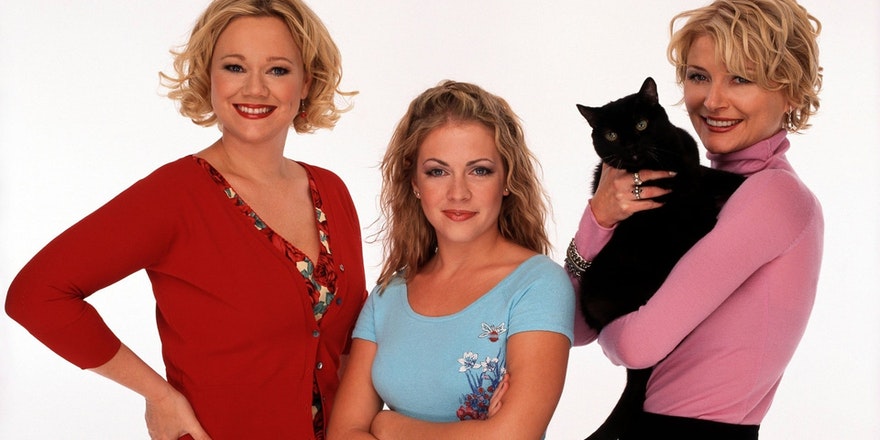 The cheetah and I enjoyed this collection and we gave it a thumbs/paw straight up.