It wasn’t until I was writing our review for “ “Maneater”” that I realized we had barely watched any “creature features” outside of ““Jurassic City”” and “ “Terror Birds”“. I admit,I love me some creature features,be it dinosaur,terror birds or a wendigo….the sillier the better. So I reached out to our undercover informant at Warner Brothers Archives and asked him if he has anything up his sleeve in terms of just terrifying creatures.
He said “Wasn’t “Maneater” enough for you?” I then sent him a picture of the cheetah’s right paw and he said “I got just what you two need!!” And that is how we got to watch the classic creature feature “From Hell It Came”.

Holy crow…..where to start? A small group of American scientists are on a Polynesian island tracking fallout from a nuclear test gone screwy 1,500 miles away. This has caused the natives to distrust the Americans and led by the evil witch doctor,the good king has been poisoned to death and his son,the prince has been blamed for his death. The prince says he is innocent but his wife betrays him and says that prince was one who gave the king the American medicine. With that,the witch doctor on behalf of the new king,kills the young prince. Before dying,the prince swears revenge….

We meet the two main American scientists,Prof. Clark and Dr. William “Bill” Arnold. The two men explain why they are here and that Bill wants to go home but is hanging back because he has the hots for Dr. Terry Mason. The small team also includes a U.S. Army radio man and as the men talk,suddenly a loud scream is heard. The men rush out to rescue Mae Kilgore,who witnessed the murder of the prince but was spotted and chased to the scientist’s huts.
Mae is Australian and despite being only in her early 40s,is a two time widow. She also runs the small trading post on the island.
As this is going on,the natives are burying the prince,leaving the knife was used to murder him in his chest. 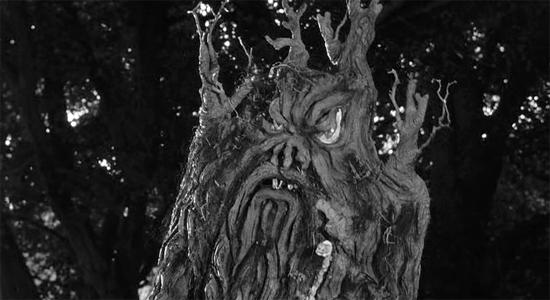 The new evil ruler and the witch doctor then conspire to kill the Americans and also any tribesmen who are seen with the Americans.
Dr. Terry Mason arrives on the island and as the she is driven to the main huts,the grave where the prince was buried is starting to cave in and something is starting to move!
When the team discovers the small misshapen tree,a friendly tribesman explains it is Tabonga and it has been on the island before where it killed many people before vanishing. The team scoffs at that tale and decide to uproot it to study it closer.
As they uproot Tabonga,the knife is moved and soon it appears to be dying…until Dr. Mason injects it with a new relatively untested serum…..but what happens when the serum works better then expected??? Will Tabonga have his revenge or will be it be stopped in its savage path of terror?

Wow…this was GREAT fun!! My good friend and fellow critic Andrew from The Movie Sleuth actually was the one who gave me the heads up on “From Hell It Came”.
This is a typical “B” creature feature that poured out of Hollywood in the 1950s and well into the 1960s. It featured a lot of dialogue,very poor special effects and a lot of actors who were showing just how GOOD they were by acting in these extreme cheapies.
The Polynesian men were all American actors and the women may have been Hawaiian but those accents were straight from Brooklyn!!
The creature itself,my God….you really have to admire the cast for keeping a straight face,I know the cheetah and I were howling in laughter. Speaking of the cast,special kudos to actress Tina Carver for playing it straight,Tod Andrews looks like he wanted to hide most of the time,the “love” scenes with Carver come across very awkwardly and cringey.

Nonetheless this was a hoot,my two biggest complaints were for a movie that is only 71 minutes long,it took 50 minutes before we get to Tabonga!! More Tabonga,less talking is what was needed. The second….Tina Carver was pretty actress but she couldn’t scream for shit!! The shrills she came up with should have killed everyone on the island…it was just terribly funny to listen too.

“From Hell It Came” has a run time of 71 minutes and this would be a “G” rating.
The BluRay release features the original trailer.
You can buy this fine release by going to the Warner Brothers Archives  website.

The cheetah and I gave “From Hell It Came” a thumbs/paws up.

Which creature feature movie is your favorite?? Drop us a comment below!!