I’m looking outside at our first major snowstorm in about 5 years,we are have hit with about 6-8 inches of snow and its still falling as I begin this review. Its supposed to snow all day today,clear up for a day and then dump another round of snow on us.  It is bitterly cold as well so the snow can’t really melt and its also windy which makes it even colder.
So how does one handle such a crisis you may be asking yourselves? Well if you are the cheetah and myself,you make some coffee,grab the package that we got from our NEW deep cover asset “MR” over at Warner Brother Archive and get to watching!! We got three very interesting titles for our first round and we started off with a movie I remember seeing coming out in 1990 but was too busy to see it. The movie is “Pump Up the Volume” which stars Christian Slater and Samantha Mathis in her film debut.

As the film opens up,we hear the voice of “Happy Harry Hard-On” who is a pirate radio host who is complaining about his life and life at his school,as the opening credits roll,we meet various high school kids and thier social status,jocks,rebels,punkers,rich kids and over achievers as they start to show up at school. A few kids are met at the bus stop and led to the principal’s office.
Hard Harry as he is popularly known,goes on the air every night at 10:00 pm where he plays a lot cool music,smokes a lot and pretends he is performing a sex act every 15-20 minutes. He also rails against the school,the fact he is new to the school and has no friends and is lonely,his voice strikes a chord with many of the students and they all meet at a place where Harry’s broadcast signal is strongest. Some kids record Harry’s show and sell them to to other students at school.
Harry is in fact Mark Hunter (Christian Slater) a new student who is a serious student and very quiet. He dresses very quiet and doesn’t really interact with anyone.  Mark feels very alone,he moved with his parents from back east because his dad took a new job as a school commissioner and one of the schools is Harry’s.

A student named Nora Diniro (Samantha Mathis) decides to find out who Hard Harry is and starts to investigate. She listens to every show listening for clues. One of the more popular segments of Harry’s show is reading listeners mails and then calling them up for a quick chat. But Harry also has access to his high school’s teaching staff’s internal memos and personal info because of his dad’s job. He finds outs a guidance counselor has betrayed some of the student’s sessions and shared their info. He calls the counselor and lights him up causing the counselor to stutter and stammer before hanging up.
The show is getting more and more popular with the kids and soon we start seeing things that Harry has said on his show starting to be tagged on walls at the school.
Things take a very serious turn when Happy reads a letter on the air about a student who is threatening to commit suicide,Harry calls him and does his best to talk to talk the unknown student off the ledge so to speak but the student hangs up. The next day the student body funds out that the student did indeed kill himself,this triggers the school to reach out to the police to find Hard Harry.

But Nora has already found him and she commends Mark on his attempt to talk the student down,Mark is in no mood and he walks away and heads home. He decides to end his pirate show and turns off his station.But he changes his mind and goes back on the air and shares his feelings about suicide and urges any kid listening not to do it,their future is theirs to do what that they want,while Harry is cutting loose,another student rebels and puts all of her awards and trophies she won her dad more then herself in a microwave which while destroying said items,also injures the girl.
The police realize that need help and contact the FCC to help them find Harry. When Mark stumbles across a massive secret at the school,he faces a choice…..he can shut down his station before he is busted or he can do one last broadcast (with Nora’s help) and expose what the leaders of the school have been doing illegally but he will face being arrested himself if he goes live……

I remember this movie when it came out and Christian Slater’s star was on the rise as we entered the 90s. Slater had stolen “Heathers”when it was released in 1989 and he became a teen heartthrob. I recall the soundtrack to “Pump Up The Volume” doing better then the movie did during its run.
So what did we think of “Pump Up The Volume”? I think writer-director Alan Moyle had good intentions but his story just didn’t work very well. The biggest question I wanted answered was what was Mark Hunter so angry about?? Both of his parents doted on him,they bought him his shortwave radio equipment so he could stay in touch with his friends. They never invaded his personal space,they attempted to talk with him at dinner time,they wanted to be involved with his life. It wasn’t his parents who were out of touch,it was Mark himself.

He chose to be a loner,he pushed away everyone who tried to get close and if he had a legitimate reason,one could understand that but he doesn’t. He has a good life and that leads me to the other other question….what did this kids in the movie have to complain about as well? We find out the principal and her staff are dirty but the kids who listen to Harry/Mark,they are rebels without a clue except for the young student who kills himself and the pretty rich girl with the overbearing parents who have her life planned out for her. Those two kids,they had reasons….but the rest of the kids who show up at 10 pm on school nights to smoke,drink and be loud? Yeah,not so much. They come across as clique followers who only want to be entertained because they are bored. The film is asking the viewer to root for these “underdogs” but its rather hard to when many of the kids have nice cars and clothes and understanding parents who let their kids stay out that school nights.  Moyle writes for what he hopes is a big rousing audience reaction but I’m sure most adults in watching this movie failed to see why they cheer on a bunch of bored teens.

But the music soundtrack is really strong and despite a underwritten script and characters,the cast tries hard to punch up the story with their performances. Slater really shines has Harry/Mark…..he is smart,well read,has empathy towards everyone (a teen having empathy!!!) and is very creative. It would have been interesting to see here Mark Hunter would have been in 10 years after “Pump Up The Volume”ended. 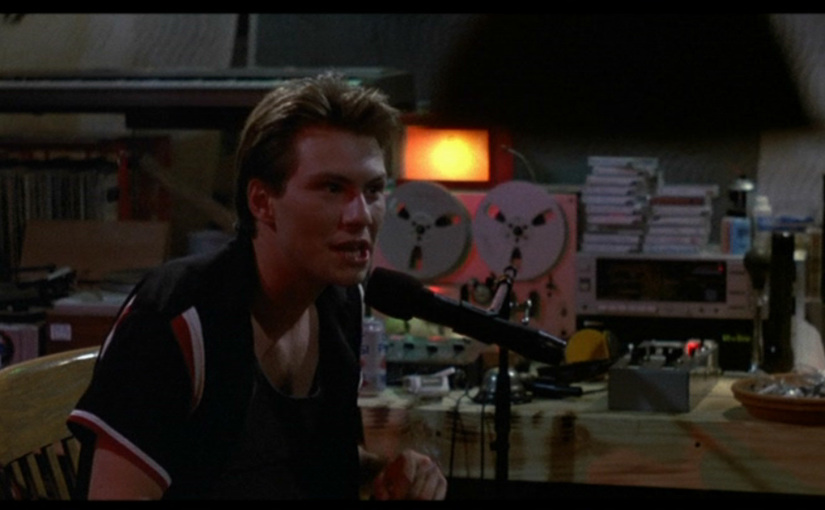 “Pump Up The Volume” has a run time of 1 hour 42 minutes and is rated “R”. There is no special features with this BluRay release.
The cheetah and I liked  Christian Slater and the soundtrack with bands like Concrete Blonde,Liquid Jesus,Sonic Youth and the mighty Soundgarden but they’re not enough to lift “Volume” up. We both gave a thumbs/paw down on this one.

But in case you don’t trust us,you can buy your copy of “Pump Up The Volume” on the Warner Brother Archive website.