Last Friday the cheetah was showing me some of his favorite hunting tricks and using my foot as an example. I would stick my foot out and he would jump on it,fangs gleaming and claws extended. As I pondered how I would look toeless,my buddy Romey called and said that Dollar Tree was doing another movie sale. Well considering they just had one six weeks ago and it wasn’t that good in terms of selection….I was thinking of passing on it until I saw Paladin pounced and ready to fly…..suddenly a trip to Dollar Tree seemed prudent.
I am happy to say that I was very glad I went as I picked up “Dawn Rider”,a 2012 remake of a old John Wayne film,”The Dawn Rider” from 1935. Now while it had a fine cast on the cover in Christian Slater,Jill Hennessy and Donald Sutherland…..for the cheetah and myself,we were totally stoked because it also starred our favorite actor….LOCHLYN MUNRO!!!
This will mark our 5th review of a film with Lochlyn being featured and we couldn’t be more happy…..

Dawn Rider is a western set in the Wyoming Territory in 1883. We find that ex-lawman John Mason (Slater) is being pursued by (Cochrane) Donald Sutherland and a couple of cohorts for an adventure down in Mexico as well as in Oklahoma and Missouri. They almost catch him at a cabin but Mason evades capture at the last second thanks for some clever thinking.

Meanwhile at a small town,there has been a rash of robberies of stagecoaches led by several masked men. One raid is so brazen that the gang rides into town to rob the coach of its freight. Some of the town’s men try and stop the hold up but to no avail,the bandits,despite losing two men,escape with their loot. 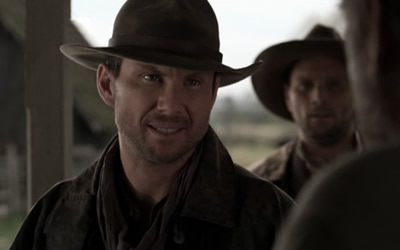 While this is happening,John Mason is making his way home and has stopped to wet his whistle at a bar. A poker game is being played and when a local stranger manages to beat the local card shark,the shark decides to keep his money and has the back-up to make sure he does,until Mason points out he has been cheating. Once the saloon sees who backing the stranger’s play,they decide to stay alive as Mason’s reputation as a fast draw is well known. (“He IS fast,but he ain’t Paladin.” – the cheetah).
The stranger sees Mason’s campfire and starts to do into his camp when Mason comes from behind with his gun drawn,he had set up a decoy just in case the shark decided to change his mind about his lost cash.
The stranger is Ben McClure (Ben Cotton) and he is a replacement rider on the freight coach that has been getting robbed. The two men bond and since Mason is going to the same town,they ride to see Mason’s father,Dad Mason. Father and son don’t really like each other as we see Dad pop John on the chops in the form of a greeting. The three men proceed to get drunk. (Mason pretty much is a alcoholic).

We find out that Dad Mason also works for the same freight company but he also pretty much blind. Ben and Dad head to the office while John gets the lay of the town which includes meeting an old friend named Alice Gordon (Hennessy) who is strapped with a Peacemaker at the ready. Mason knows Alice and her brother Rudd from when they were growing up. Seems like Alice has carried a little bit of a torch for Mason all these years.

The hold-up gang hits town again and this time at the freight company’s office. A trio of robbers enter the office and demand the cash. Ben and Dad Mason draw down as well and for a second its a stalemate. But when the door suddenly opens,Ben starts shooting and both sides start blasting away at nearly point blank range. Dad Mason is shot and one the robbers slugs Ben with his pistol,sparing his life.
The same bandit bends over and check on Dad Mason,his wound is a fatal one and the bandit says it wasn’t supposed to be like this. Dad reaches up and sees the brand of of two “X” before slumping back….the gang goes to escape and heads towards their comrades.
Hearing the shooting,John runs to the office only to get into a firefight with gang members who are guarding the outside. John manages to wound one but in turn is hit as well. He manages to stagger into the office where find his dad dying and whispering “Dos Equis”,John doesn’t understand Spanish and so his dad’s clue dies with him. John then passes out himself
At the gang’s hideout,we see that the leader is angry at the man who shot Dad Mason. His rule is one of non-violence and now that rule has been broken in the worst possible way. The leader tells the hand who shot Dad to draw,the rest of the gang is surprised because the leader isn’t much of a gun hand. They find out differently as the leader drops his former member where he stands.

John is being attended to Alice when he wakes up three days later. Ben is there with him as we see Alice’s brother Rudd come into the room and he is also the leader of the hold up gang that has killed Mason’s father.
Mason as recovers he learns that Alice and Rudd are going to lose their land if they don’t come up with 5,000.00. John offers to help with the money his dad left him not knowing the part Rudd has played. And when he starts a romance with Alice,John doesn’t realize another man is also sweet on Alice and how that will affect his life.
When Cochrane finally catches up with John to take him back,its a perfect storm of action,revenge and justice all in one small town. Who will walk away and who will not…..

So did the cheetah and I like “Dawn Rider”? Oh yeah!!! This was a solid movie,extremely well acted and despite a bit of a slopping ending,is a grand old time. There is a lot to said about “Dawn Rider” and the first thing is the cast. Everyone involved definitely brought their “A” as Munro and Slater were top drawer as Rudd Gordon and John Mason,two old friends who sadly have to reunite in a most unfortunate way.
Rudd isn’t a typical Western heavy,he is a good man who feels he is being pushed off the land his family has worked on for years. Despite a slightly unlikely ending twist,you like Rudd and you can’t but feel sorry for him. I have noticed that Lochlyn seems to act to the level of the story and script,the stronger the script,the better he is and just like “Badge of Honor“,despite not getting top cast named,”Dawn Rider” is Lochlyn’s movie and he crushes it again…
Slater also is in fine form as he seems to really enjoy acting in Westerns. His John Mason is a tired man,being chased and hounded all over the West. This has led him to becoming a alcoholic and a little bit slower on the draw,a bad trait to have when one lives via those same guns.

Writer/producer Joseph Nasser’s script is decent,he shows that the line between the good guys and the bad guys is more grey then black and white. I like the fact that he made Mason a deeply flawed man and not a John Wayne type who hits everyone he aims at.
I think Hennessy’s Alice was a fun character but a little undeveloped,it was pretty shocking to hear an actress you have only seen doing TV shows get to drop the F bomb a couple of times,Hennessy was a good choice to play Alice,not drop dead beautiful but very handsome and not afraid of getting her hands dirty.
Terry Miles did a nice job in helming “Dawn Rider” and his decision to mute all the colors (except Alice’s Peacemaker) was a wise one,it drew focus on the characters and the story without letting the scenery steal the action. Miles knows his way around an action film and “Dawn Rider” is proof of that.

“Dawn Rider” is rated “R” and has a run time of 94 minutes. There is a 15 minute feature on the making on the film.

The cheetah and I love a good Western and we really like “Dawn Rider”. If you are at a Dollar Tree this week,look to score a BluRay copy of this gem.
We have “Dawn Rider” two thumbs/4 paws straight up!!