Reviewing movies is a odd thing to me. I find myself liking to grab some of the most out of the way movies to take a peek at. But what is equally important is the story of HOW I ended up with select movies,like “Dick Tracy Meets Gruesome”.
Way before I started collecting for the sake of collecting films,Lori and I would go out to do some running around. We went to various stores all over the great SE Michigan area.
It was while we were at a Target during the recession that they started their 1.00 section.
It was a hodgepodge of kids crafts,cheap jewelry that turned blue before you the exit doors,gift wrap and suddenly,dollar movies and collections of old classic TV series like “Dragnet” and “Racket Squad”.
So I took a quick peek and grabbed a copy of these dollar DVDs. Even back then I never ran back home and watched what I bought,I liked to wait til it was a colder/snowy day to watch TV.
But I started noticing that many of same titles were popping up all over place and they were being put out by different companies. I thought that was strange as didn’t the original company,PC Treasures,have the copyrights to “Dick Tracy”?
When I was poking around looking for the answer,I discovered that many movies were being released like this. These movies fell what is called “Public Domain”. This happens when the the film makers or studio fail to renew their rights to their creations. These works are free for any company to take the title and push out copies. You can take a peek at how Public Domain works by clicking that link. 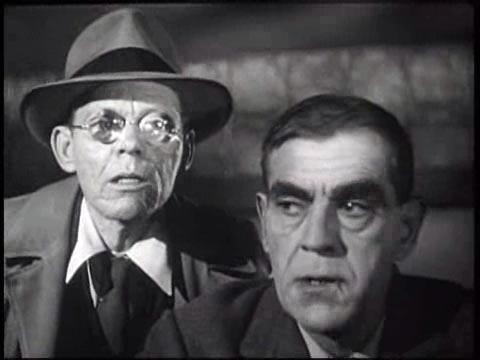 Now as to “Dick Tracy Meets Gruesome”. This was the last of a RKO Radio Pictures series of movies featuring Chester Gould’s famous detective. What made Dick Tracy stand out were all the crazy looking villains and the equally crazy names.  This movie is no different.
The film opens with Gruesome (Boris Karloff) just out of the pokey. He heads for a dive called The Hangman’s Knot where he meets up with a old crony Mel-O-Dee. Mel is really happy to see his friend and lets him in on his new racket.

Seems a mad doctor is into creating new gases and toxins and they are not for the good of humanity. Mel-O-Dee takes Gruesome to meet the mad doctor but X-ray isn’t quite so welcoming. Instructing Gruesome to “not to touch anything”,X-Ray goes to see the boss.
Of course Gruesome DOES mess around with some strange gas and gets poisoned. He staggers out to find Mel-O-Dee and help but appears to die before that happens.
When Gruesome wakes up in the morgue,he finds himself more ruthless and aggressive then ever before,he knocks out Dick Tracy’s right hand man,Pat Patton before escaping and taking over the mad doctor’s entire operation.
When Tracy’s girlfriend Tess Trueheart is witness to a robbery where everyone but her is suddenly paralyzed,she calls for him. But when Gruesome and his gang rob the bank for 100,000 dollars and needlessly kill a young cop,Dick Tracy launches a massive dragnet to catch Gruesome before he can strike again…….

This was a fun little caper,Ralph Byrd makes a fine Dick Tracy but it always has been the villains that draw you into his world. The legendary Boris Karloff seems to be having a kick playing Gruesome,he brings some depth to the character. When we meet Gruesome,it appears he doesn’t LIKE being called that and he seems unsure of himself.
The fact that Mel-O-Dee (Tony Barrett) really seems to consider him a friend in era where gangsters were portrayed as solo loners with no friends,this bond stands out.
Of course after Gruesome is hit with that poisoned gas,his personality changes and he becomes dangerous and a killer. Karloff does a good job at showing that side of Gruesome too….

This movie was directed by John Rawlins who was a journeyman who directed several B movies and knew how to get the most of his budget.

Dick Tracy Meets Gruesome would be rated “PG” for mild violence and smoking.
This movie runs at a very quick 65 minutes and in a first for me,I am including the entire film with this review.

Any Dick Tracy fans out here? Is it time for Hollywood to take another crack at doing a Dick Tracy film? Would you cast as Tracy and/or his Rogue’s Gallery?
Drop a comment below!!

Seeking Solace in the Horizon of Life & Beyond