The cheetah and I are back in saddle and heading West as we look at one of the last miniseries made for network TV,Larry McMurtry’s “Buffalo Girls” which has been re-released by Mill Creek Entertainment.

As regular readers may have already guessed,the cheetah and I love a good Western,the cheetah wasn’t named Paladin by a sheer random “name the cheetah” luck of the draw.
The Western genre has seen its ups and downs in both at the movies and on TV. The studios churned out Westerns by the hundreds during the 1950s and into the 1960s,dozens of TVs shows created a whole generation of stars while young bright studio actors at Warner Brothers,MGM,RKO and Columbia cut their acting teeth on cheaply made by the number westerns for the big screen.
The Western went from a mighty river to a small stream in terms of content. When the last major Western TV show,Gunsmoke,ended its 20 year run in 1975 and John Wayne’s fabled career ended with “The Shootist” in 1976,it appeared the Western was all but dead.
But a against all odds,it hung on…”Little House on the Prairie”debuted in 1974 and a new movie format called a “Mini Series” suddenly caught fire with the massive runaway hit “Roots”. Syndicated TV jumped on the bandwagon with “The Kent Chronicles” while over at NBC,”Centennial” not only redefined what a miniseries could do in terms of drawing a all-star cast but once more helped keep the Western alive while attempts at establishing TV series continued to sputter and fail.

Then in 1989,maybe the ONE miniseries that truly re-established the Western as we know aired on CBS and it was Larry McMurtry’s “Lonesome Dove” with Robert Duvall and Tommy Lee Jones. It was a huge ratings success and sparked a true Western revival that saw a whole new of both TV show and movies like “Young Guns”,”The Young Riders”,Dr. Quinn,Medicine Woman” and of course,”Lonesome Dove” sequels and prequels.
But as new series took hold,the format that had kept the Western alive and kicking,the miniseies,itself was starting to fade as the four major networks were producing less and less of not only big miniseries but even TV movies as well.

CBS decided to once again adopt a McMurtry book,”Buffalo Girls” as a new miniseries and it threw in a ton of cash in the telling of the last days of the Old West as seen through the eyes of Calamity Jane (Anjelica Huston),otherwise known as Martha Jane Cannary,a true legend and one of the most striking figures of her day.

The plot of the story has Jane looking for her long lost daughter that she had with Wild Bill Hickok. It is implied that Jane not only lost her virginity with Hickok but became pregnant as well.
The series details a series of adventures that Jane describes to her daughter in the form of letters. Starting with Jane and her two friends,fellow trappers Jim Bragg (Tracey Walter) and Bartle Bone (Jack Palance) riding with Custer’s 7th Calvary,it shows how Jane often passed herself off as a man as she was wore men’s clothes and acted like a man as well. But when she is discovered as a woman,Custer has her reduced to doing menial labor.

Its here that we see that Jane’s one true love was Wild Bill Hickok (Sam Elliott).
While Jane pines for Bill,he sees her as rather homely and isn’t attracted to him. The interesting truth is that Jane was often described as a very pretty girl despite her garb.
It isn’t until they meet up in Deadwood and Jane’s best friend Dora DuFran (Melanie Griffith) makes Jane over that Jane makes the mistake of revealing her feelings for Wild Bill. He in turns embarrasses her in a front of a full saloon. Jane then leaves upset but when Bill finds her later that night,they sleep together before Jane leaves Deadwood. 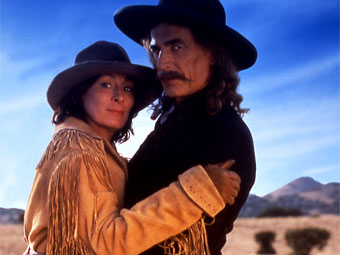 As Jane wanders towards Yellowstone,she is met by her Sioux friend No Ears who earns her that death is very near. Jane and No Ears then come across the Little Big Horn where the 7th Calvary has been wiped out. Jane’s life is saved by No Ears when they are discovered witnessing what has happened.
It is No Ears who tells Jane that she is expecting and she is shocked as she had only slept with Bill the one time,he helps Jane thru her pregnancy. After her daughter is born,Jane heads to Deadwood to tell Hickok that he is a daddy but is greeted by the terrible news that he has been murdered,Jane is completely crushed. 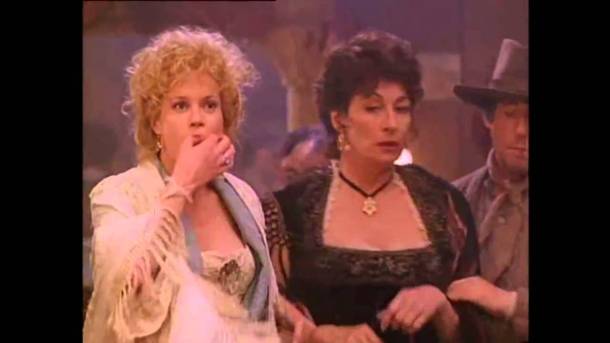 After Jane gives up her daughter,she wanders the Old West which is slowly giving way to modern progress and old timers like Jane just can’t seem to adjust. Their way of life as they know it is gone,the Indians have been pushed onto reservations,the train cuts across the Plains,the buffalo have been hunted to almost extinction,there is much more law and order in the cities now.
As Jane travels,she sees this first hand and despairs of it. She ends joining Buffalo Bill Cody (Peter Coyote)’s “Wild West Show” before returning to help her friend Dora…

Did the cheetah and I enjoy “Buffalo Girls”? Yes,very much so. Simply because is my favorite performance by Anjelica Huston. Her portrayal of Calamity Jane was full of energy,life,regret,joy,sorrow and passion. In other words,her most emotionally satisfying piece of acting and yes,that includes “Prizzi’s Honor” in which Huston won an Oscar for.
Being able to actually display various emotions seems to have really energized Huston performance and I couldn’t take my eyes off her,I simply had never seen her show that much range in any of her roles before. She has always seemed typecasted as a cool,remote and frigid ice queen who is only out for herself or as a exotic witch like Morticia Addams. 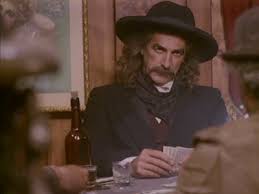 Even in her lighter roles,she has been shoe horned into playing these types of roles.
It’s a crime that while Sam Elliott was nominated for a Golden Globe for Best Supporting Actor as was Melanie Griffith,Huston was ignored. You know I’m a huge Elliott fan but that was a joke,he slept walked through his role and was out of the movie at the 36 minute mark. Actually this may have been my least favorite Elliott role.
Griffith was deserving but Huston definitely was robbed here.

The rest of all-star cast was wonderful as well with Floyd “Red Crow” Westerman as Jane’s Indian friend being my favorite. Palance and Walter as a pair of trappers are also quite good and its tragic how they come to realize their time has come,gone  and left them behind.
Veteran director Rod Hardy,a native of Australia,has a genuine love for the Old West because Buffalo Girls is superbly directed and the film is beautifully lensed by David Connell,the locations were not only shot in the United States but over in the UK as well.
Hardy would go to direct the TV version of “High Noon” which aired in 2000.

While this may have been a heavily altered and romanticized version of what really happened,in many incidents,the bare bones of “Buffalo Girls” is rooted in fact.  There really was a Wild Bill Hickok,a Buffalo Bill Cody,sharpshooting Annie Oakley and yes,Calamity Jane. Hickok was indeed killed in Deadwood,Buffalo Bill had his famous Wild West Show and sadly,Jane become a alcoholic (of which she was portrayed in many older Western TV shows) and died at aged 51.

“Buffalo Girls” is a bittersweet watch but a must have for any true Western cinema fan.
This film has a run time of 180 minutes and has no special features. The cheetah and I both gave “Buffalo Girls” a big thumbs/paws up.
You can buy a copy at the website of Mill Creek Entertainment.

As always comments are most welcome!