In another life,I saw “Key Largo” at a small theater in Palo Alto,Calif.  The year was 1994 and I was on a date with a girl who enjoyed classic cinema. It was a fun date and after the movie was over,we went and had coffee and talked about the film. It was the only time I have watched “Key Largo”.

But after watching and reviewing “To Have and Have Not“,the cheetah and I decided we would take another peek at “Key Largo” and thanks to our ever trusty source at Warner Brothers Archives,we soon had a copy in our hands,iced coffee in a cup and the
cheetah handling the remote….

The plot is pretty simple…..Humphrey Bogart plays a soldier just back from the war. He is traveling to see the family of a friend who was killed during the battle for Mount Cassino.
What he isn’t counting on is stumbling into a meeting with Johnny Rocco,a mobster from Milwaukee who has been hiding in Cuba and has come to make a huge counterfeit deal with his old pal Ziggy from “up north”.
Not only does Frank McCloud (Bogart) have to find out a way to stop Rocco and heavily armed crew of five from killing him and his friend’s family,the Temples,he also has to survive a hurricane that roaring right down on them. 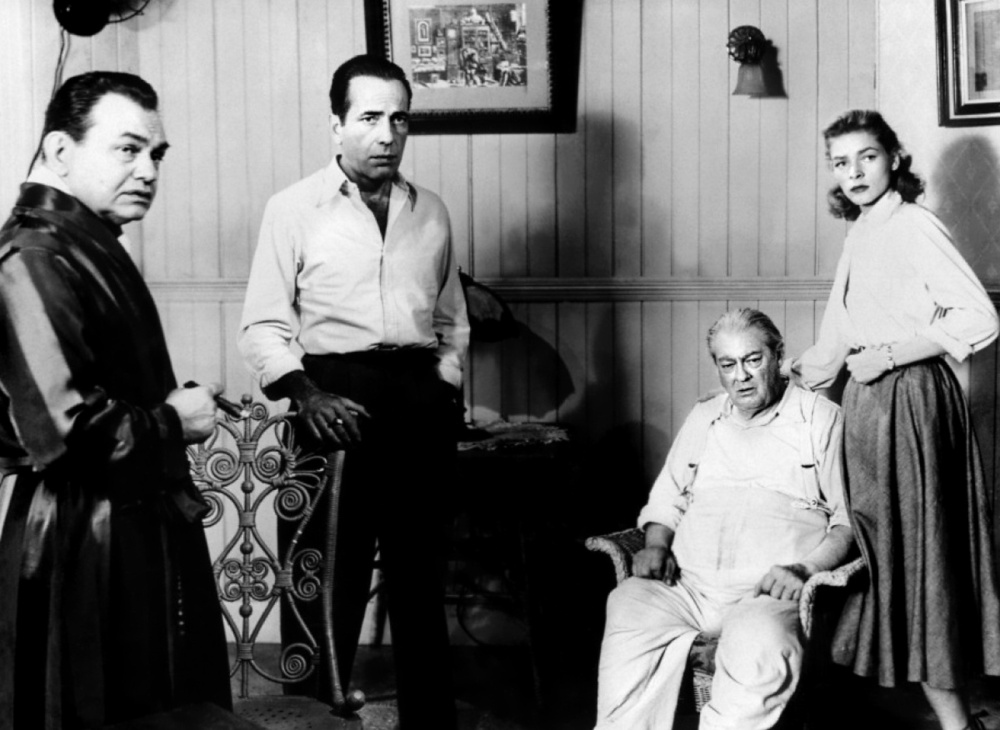 This is such a well known film that I am skipping my usual format and instead sharing some of my thoughts on what we watched.
While people look at “Key Largo” as a “Bogie-Bacall” film (it was 4th and last film they appeared together in),I feel it was much more an ensemble cast with bright moments from each of the cast,other then Robinson’s sadistic Rocco and Barrymore’s excellent turn as James Temple,no one else stands as a shining light. That isn’t saying “Key Largo” is a bad film…the different interactions between the various characters is incredibly interesting to watch.

I think Bogart’s McCloud is the most confusing,he knows how to push Rocco’s buttons yet continues to let him slide by with his brutish actions towards the Temples yet he steps in when Rocco’s alcoholic moll Gaye Dawn needs a drink that Rocco’s promised but then refuses her.
McCloud stays silent not once but twice when Rocco whispers filth into Nora Temple’s ear but then lies to James Temple when he switches his story to make it appear Temple was this really brave soldier in combat when in fact,it is Frank who the brave one. The way his courage and course of action is really an uneven ride,its hard to get a feel for the man. 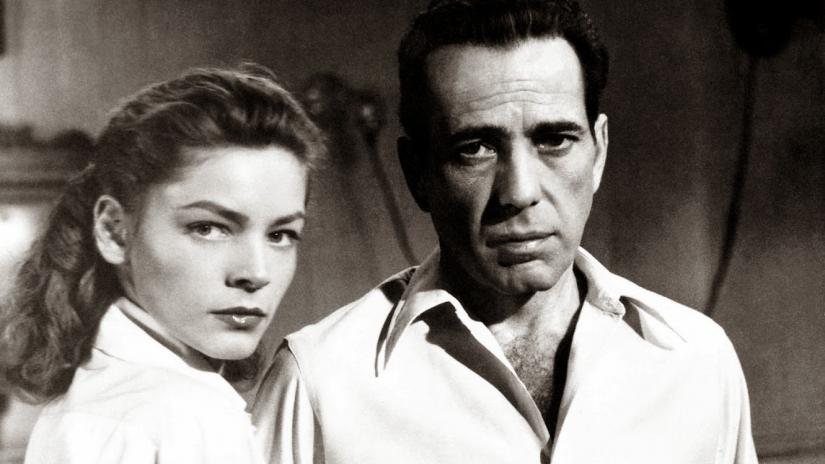 Where as James Temple,despite being crippled,is blunt and emotional,he despises Rocco and his gang,he has no fear of them. Is it bravery or a case of suicide by gangster that Temple is after. The fact he still shows heart and a great love for his Indian neighbors and Nora shows you that Temple is a man still with powerful vitality.
He admires justice and fairplay and knows Rocco respects neither. While gang mocks Temple for his disability,there is fear as they recognize that this would not be such a easy mark if he was healthy. 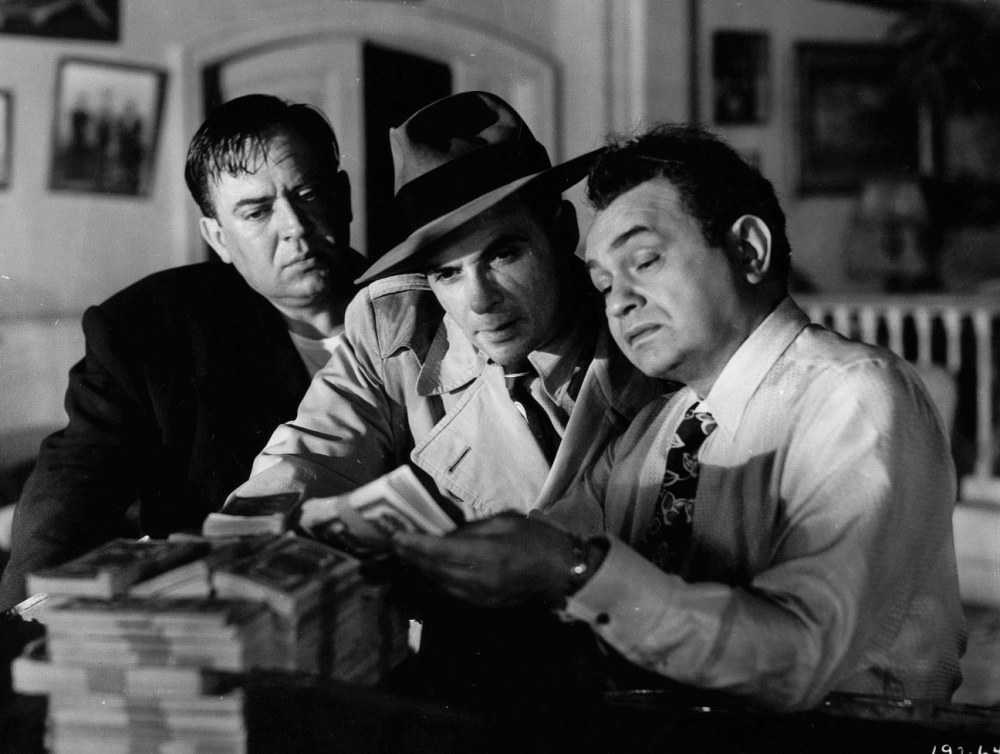 Barrymore pours his heart into James Temple,Barrymore who by then was confined to a wheelchair in real life due to breaking his hip twice,has a scene where he gets up out of the wheelchair to go after Robinson’s Rocco. In my opinion,it was Barrymore who deserved an Oscar,not Clare Trevor,who won Best Supporting Actress for her role as Gaye Dawn. This was a terrible choice because Trevor,while okay,wasn’t great by any stretch of the imagination,her role was small and she performed it well but it isn’t Oscar worthy. 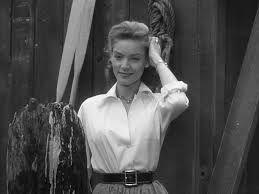 Bacall herself was really subdued as Nora Temple,sparking to life when her father is roughed up and when Rocco riles her up with his filthy sexual talk,she displays none of the typical Bacall wit or flair and she is much the better for it. Her Nora is still reeling from the death of her husband and she is going through the motions as far as living her life. While she is kind to Frank,she isn’t attracted to him as of yet,while the movie hints at that is what MAY happen,it isn’t shown on screen. Bacall looks older and definitely isn’t looking glamorous as she normally did. 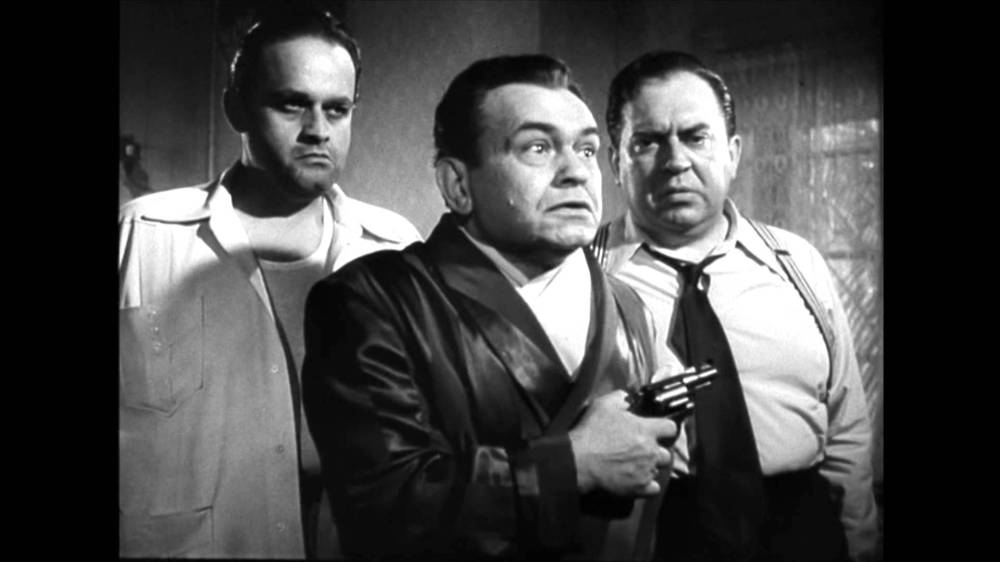 Finally we look at Robinson,who could a gangster in his sleep. But his Johnny Rocco was played full hilt,full of cunning,cruelty,greed and sadism. His gang was ruled not only Rocco’s charm but by fear,Rocco is seen as a old school gangster is influence is slowly being eroded away,he is desperate to make this big score because he needs it not only for the money but to show his own crew that he is still strong and very dangerous. 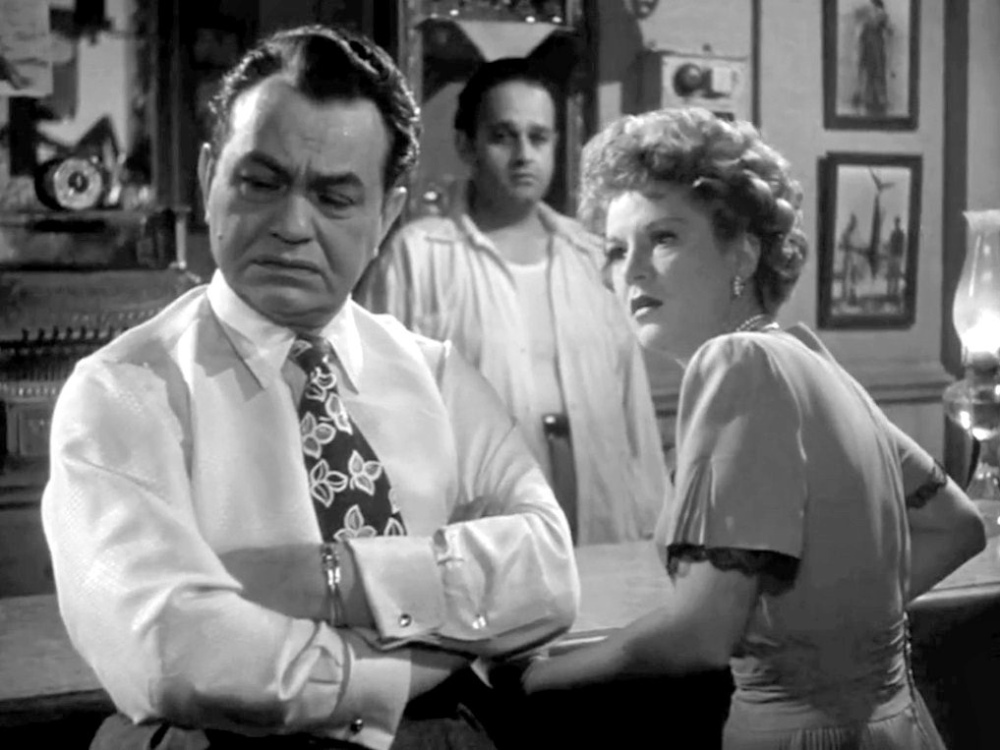 “Key Largo” was originally written as a play in 1939 by Maxwell Anderson but legendary director John Huston along with Richard Brooks deconstructed the play and rewrote to reflect the modern era as the original story was set in the Spanish Civil War 13 years earlier.
I liked “Key Largo” but wasn’t wowed by it,”To Have and Have Not” is a much better picture and as far as Bogart performances go as a leading man,this may have been his weakest up to this point.

“Key Largo” has a run time of 1 hour 40 minutes and there are no special features on this release.  You can buy the BluRay copy which looks great at the Warner Brothers Archive store.

We gave “Key Largo” a thumbs/paws straight up.