The cheetah was quite happy when I told him besides “The Swarm” that our Far East traveling Warner Brothers Archives contact “M” had also sent us the 3rd Bogie and Bacall pairing,”Dark Passage”.

We have already looked at “To Have and Have Not” and “Key Largo” and after this will only have “The Big Sleep” to watch and review.
I had never watched “Dark Passage” so it was a fresh adventure for us and we didn’t waste any time in putting it on.

Vincent Parry (Humphrey Bogart) has just escaped San Quentin Prison where he was locked up for killing his wife,the problem with that is he didn’t do it. While the couple had their problems,Vincent still cared for her. He knows he is innocent and he gambles on this escape attempt.
He knows he has to find a car fast,he estimates he has a 15 minute window before the cops will be swarming the area. 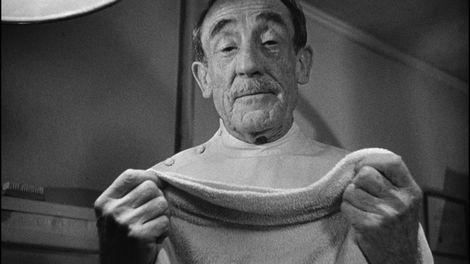 Luckily a car does come by and the driver decides to give Vincent a ride,he is very chatty and soon starts to notice Vincent’s garb. Vincent decides he is getting too noisy and asks to be dropped off,he’ll take his chances without being noticed. But when the driver recognizes him,Vincent has to act fast,he knocks the driver out and steals his clothes. As he climbs up toward driver’s car,a station wagon pulls up and a woman(Lauren Bacall) calls Vincent by name,telling him to “get in”. Vincent is surprised but he gets in,the woman is Irene Jansen and she happened to be by the prison painting when the news bulletin broke about Vincent’s escape.

After avoiding the cops,she shares her story,she believes in Vincent’s innocence and he recalls seeing Irene at his trial. Her father died in jail after being wrongly convicted in her mom’s death and she doesn’t want the same fate for Vincent.
They get to Irene’s apartment and when she goes to get him some fresh clothes,Vincent is completely shocked to hear someone knocking at the door and knowing the person who is knocking!!

It turns out that the person is a sharp tongued woman named Madge(Agnes Moorehead),Vincent had spurned her romantic advances and Madge,hurt by the rejection,had given critical testimony at Vincent’s trial which helped convict him. He is perplexed on how the two women could know each other and when Irene returns,he explains it to her and says he has to leave. 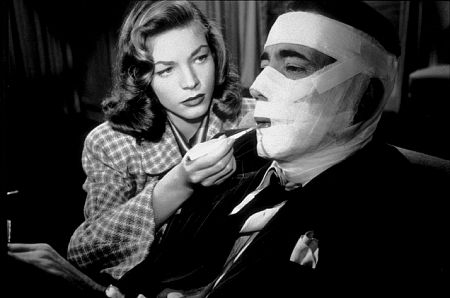 Vincent loses himself in San Francisco and at night hails a cab driven by yet another chatty driver,he introduces himself as Sam(Tom D’Andrea). Soon he makes two things clear,he knows who Vincent is and he believes in his innocence as well. Sam says he can help Vincent by taking him to a doctor who can do plastic surgery (for 200 bucks!!!).
Sam sets it up and Vincent,having a hour to kill,visits his best pal George who agrees to let Vincent stay while he heals up.

Vincent then meets Dr. Coley(Houseley Stevenson),who despite losing his medical license,has a little treatment room set up just for cases like Vincent’s. Despite not feeling the most confident,Vincent plucks down his 200.00 and gets his surgery.
After being strict instructions on his aftercare,Dr. Coley has Sam take Vincent to George’s place. But someone has come in and killed George but who? Vincent barely makes it back to Irene’s. While she tends to him,Vincent has two choices,he can flee as soon as he able or maybe,just maybe,he can find the real killer of his wife and now his best friend. But he is going to have to hurry,while his face is new,his fingerprints are not and they have been found on the object that was used to kill George……

Alright,I’m to say something that may surprise folks,I think “Dark Passage” is BETTER then “Key Largo”. I know I enjoyed it a lot more,I loved the concept,story and admired Humphrey Bogart for his choice in playing Vincent Parry.
What makes “Dark Passage” so different is you don’t see Bogart until there is about only 20-25 minutes left in the film,the first 37 minutes is seen through Vincent’s point of view.
While not entirely new,”Dark Passage” charted unknown territory is hiding Hollywood’s biggest star for almost 2/3 of the film. In fact,in the special features,there is talk about how Jack Warner really hated that idea and Bogart himself openly wondered how Warner would react (not well but the film was too far along to change it). Bogart was the highest paid star at the time and it was a gamble to say the least.

But it pays off because it really showcases the rest of the cast beautifully,Lauren Bacall never looked better,she was able to show some real depth as her compassionate Irene was a welcome change from the edgy femme fatale she was used playing. The tenderness her Irene shows really changes how one would see Bacall afterwards.
The rest of the cast also benefited as well,Tom D’Andrea as Sam,the disgraced Dr. Coley as played by Houseley Stevenson will give you nightmares afterwards thinking of him performing surgery on you!
Agnes Moorehead as Madge was so cruel and hateful,she made Endora (from Bewitched) seem like a Girl Scout. Top to bottom,this was a very acted film.
The film was directed by Delmar Davies who went on to direct Western classics,”Broken Arrow” and “3:10 to Yuma”. The story was based on a book written by David Goodis.
The film looks terrific and this was one of the first Warner Brothers film to shoot on location. San Francisco sure looked a lot different back in 1947 as there wasn’t even close the amount of traffic as today but they did one thing that hasn’t changed,you had to pay a toll to cross the bridge.

Bogart and Bacall’s chemistry remains strong and you can see how they feel towards each other in their scenes. We’re looking forward to seeing the 4th and last onscreen pairing of this legendary couple in “The Big Sleep”.

“Dark Passage” has a run time of 1 hour 46 minutes and special features include a look back at the film by film historians,a Bugs Bunny cartoon and original film trailer.

You can buy a copy of the Warner Brothers Archives BluRay release by going to their website.

The cheetah and I give “Dark Passage” two thumbs/three paws straight up.

Which of the four Bogart-Bacall films were your favorite? Drop a comment below and share your pick with us.