As I was making dinner today,I heard some activity down in the basement. I headed downstairs to see what had the cheetah in a uproar. I found him pawing through our “to watch” bins (yes,I said bins) and I asked him what was looking for.
“Do you realize that we have only reviewed ONE film with Aaron Eckhart in it? Why is that,we both really like him and think he is one of finest actors working today”. I picked Paladin up and said “I don’t have a proper answer for that BUT I do have a new Eckhart film that we can watch if you want…” With that,I grabbed “Line Of Duty” and turned off the oven,we had a Aaron Eckhart film to watch……

The film opens up with us meeting police officer Frank Penny as he goes through his routine in the morning,some push-ups,sit-ups,making breakfast,reading the paper and drinking coffee. He gets dressed and then debates wearing his wedding or not before leaving for duty.
Meanwhile a big operation is taking place in a city park and there are cops all over the place,the operation is being run by Volk (Giancarlo Esposito) and he is very stressed about this operation not being blown. As Max Keller enters the park,the cops begin to slowly encircle him but one blows his cover and Keller spots him. The cops close in but Keller escapes and begins to run. 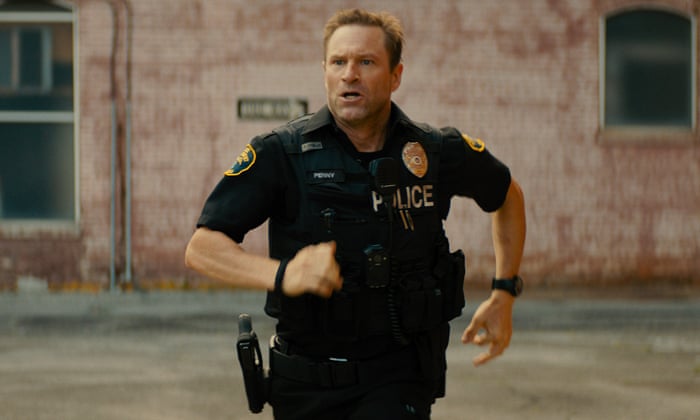 Penny,who is assigned a walking beat,hears the radio traffic and realizes that Keller is coming his way on foot. Penny radios in that he is joining the pursuit but is told by Volk to stand down. Penny ignores the order and begins chasing Keller.
The sirens and helicopters attract the attention of social media reporter Ava Brooks (Courtney Eaton) and her friend Clover (Jessica Lu). Ava is trying to build a following like Clover’s and decides she wants to see what is going on,she grabs her equipment and bolts the door to chase her story.
Meanwhile Frank has engaged with a long foot pursuit and running fight with Max Keller and has finally cornered him in a narrow alleyway. The two men square off and Frank actually shows respect towards Max and encourages him to give up but when Keller pulls a gun,Frank has no choice but to shoot him….Keller leaves a cryptic last message to Frank before dying “Ask him what it feels like to lose everything”.

Frank is pulled into a police command van and is dressed down by Volk,whose 11 year old daughter has been kidnapped and Keller was one the one clue they had. Volk is also the police chief which is why he was so tense at the park. A phone rings and a voice tells Volk to turn on his computer,we see Volk’s daughter is a death trap which will drown her in 45 minutes unless she is found.
Ava by this time has reached the crime scene and has managed to use her tech to eavesdrop on Volk and Frank and realizes what is happening. Volk tells Frank to go back to the station while Frank pleads with him to let him help. Volk refuses and tells Frank to leave his gun behind.

As Frank heads to the car to be taken to the station,Ava pops up and suggests that maybe Frank shouldn’t have been so quick to shoot which angers Franks,he snatches another cop’s gun and walks up to Ava and raises the gun to her,as she freezes,he explains just how little time he had in order to act. While she still is snarky,she sees his point and starts to walk away.

Suddenly a black SUV comes crashing through an intersection and we meet Dean Keller (Ben McKenzie) who would like to have some words with the man who killed his brother,officer Frank Penny. Now Frank and Ava,who came back when she heard the shoot out,are dashing across the city by any means possible to try and save Volk’s daughter and also not getting killed by the vengeful Dean Keller. And since Ava is livestreaming the whole adventure live,the city gets to watch as well…..

Whew….where to start with “Line Of Duty”? It is a pretty simple answer,just turn off the logic button in your brain and just enjoy the ride. This is a action-comedy all the way and the type of film that Lionsgate,through its various production houses like Grindstone,EFO and in this case,Saban Films, specializes in. These films feature one big star like Eckhart,Bruce Willis or Nic Cage and a good supporting cast. The plots may be a bit thin but the action is top notch and very fast moving.

This isn’t the first film I have watched from director Stephen C. Miller,I also watched and enjoyed “Extraction” with Kellan Lutz and Gina Carano and which featured Willis as the “name” to get you to watch. Miller is a fine action director and “Line Of Duty” is loaded with it. He also added in the “real time” element into the plot and that always ramps up the story if done right. I am glad to say that Miller and company did it right. “Line Of Duty” knows what it is and everyone having a blast(literally) in doing the film. The script is pretty snappy in places and there are a few laugh at loud moments. But it isn’t all laughs as the tone gets darker as the countdown nears its end and the Dean Keller’s need for revenge grows. The ending is also rather uplifting and reminds us that we as a society are stronger united then divided.

The cast on paper is very strong,when you get such talent as Eckhart,Esposito and Dina Meyer in the same film,you expect to get strong performances,its a given. But while Eckhart shines as Frank,Esosito and Meyer are given very little to do, Meyers plays a newsroom chief for a TV station that using Ava’s coverage in covering the story. She barely has any lines but she looks terrific!!
Eaton,who I first saw in “Gods Of Egypt”,holds her own with Eckhart and the scenes between them sparkle,Eckhart is a very good actor with younger performers. Eaton’s Ava,who is fame hungry and self-centered at the start of the story,learns that the world is a whole lot more then “followers” and that some police officers aren’t always Gestapo stormtroopers. Eaton does a fine job as Ava and shows again that she can really do well in an action driven film.
“Line of Duty” is a great popcorn and Dr. Pepper movie and if you are a fan of pure action films,then you will really enjoy this movie.

“Line Of Duty” has a run time of 99 minutes and is rated “R”.  You can get a copy of this film via the website of Lionsgate or the secondary markets like eBay or Amazon.  Special features include a director’s commentary.

The cheetah and I enjoyed “Line Of Duty” and we gave it a thumbs/paw straight up!!