In 1959,novelist Ian Fleming who wrote the James Bonds novels,wrote “Goldfinger” and featured the henchman Oddjob as Auric Goldfinger’s main muscle. The character was featured in the 1964 film “Goldfinger” and was played by Harold Sakata.
In the film,Oddjob was killed by James Bond when he went to retrieve his steel lined derby and was electrocuted during the attempted robbery of Fort Knox.
While we only know Oddjob as that killer,we don’t know anything about the man himself,his backstory,life personal life,why he chose to work with Goldfinger. But what if we could see that part of that life and get a look at the fallout of his death…how it affected his family,his wife and kids. What if a grandson,upon learning the legacy of his grandfather,decided to make amends for his actions,decided to become an force for good and became an agent for the South Korean government?
What if that grandson took his grandfather’s name of “Oddjob” and instead of using it to kill innocents,decided to use it to make the world a safer place? It’s a fantastic premise and one that MAY be the story of John Lee in this new James Bond inspired series of short films which in turn is based on a current comic book series called “James Bond 007”.
Fan films are not not new genre but they can be very tricky to make as studios are rather tight fisted over their creative properties. To make a fan film like the ones made by Star Wars and Star Trek fans,you have to walk a superfine line unless you want a cease and desist letter waiting for you.  So it may not surprise many of you to know that this is my first review of a fan film that I have reviewed but believe me when I tell you,after watching the first installment of “Oddjob”,I am pretty excited to see where this film will take us. 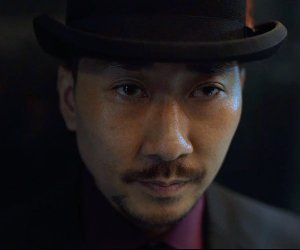 The first episode shows James Bond on his way to a potential meeting with a contact. Bond,is ambushed by a huge monster who wants a suitcase that Bond is carrying. James,who is meeting a mysterious “Oriental” with his suitcase, opens a elevator door and is met by a single man who is sharply dressed. Bond,who clearly underestimates his opponent,then gets his ass handed to him by this stranger. Where as the stranger could have killed Bond,he merely knocks him out of the elevator and as the door closes,introduces himself as Lee, John Lee as the camera fades out……Bond has met his contact the hard way.

Like I said,after watching the first part of “A Kill From the Other Side”,you will be wanting more,MUCH more.  This film comes from a new production company called Rogue Origins and is the brain child of writer-director Josh Mabie. What made this film even more speical is that a couple of good friends are also in this project,Josh Han as John Lee aka Oddjob and big Mike Ferguson,who opens the film by taking Bond’s suitcase from him. Speaking of Bond,Christian Howard makes for a solid James Bond whose over self-confidence gets a rude awakening by John Lee.

The first chapter is action packed for a 3:33 short film but I suspect we’ll be diving into the real story in the next installment as we start to get into John Lee’s history.
All I know is this a perfect way to open up 2021 and we are looking forward to more of Oddjob.  When you click on the first chapter,please also subscribe to Rogue Origin’s YouTube Channel.

The cheetah and I gave “Oddjob” two thumbs/2 paws straight up!!!