We have been without the sun for so long here that when I went shopping,I saw “sun missing”on the side of a orange juice bottle. I know the cheetah is also ready as well…he wants his window open so we can hear the robins chirp.
The potholes that we have had this year have been the worst I have seen in my 19 years here,I almost sideswiped someone coming home this week when I had to swerve to miss a giant hole in the road. And driving at night??? Good luck with that!
So what better way to avoid this kind of mess then to go back to a simpler time….like 1883 New York City???

“Life With Father” is a beautifully filmed and Oscar nominated film that takes a look at the harried life of Wall Street broker Clarence Day (William Powell). Clarence is pretty full of himself,very stuffy and borderline arrogant. But he is held in check by his devoted wife Vinnie (Irene Dunne) who is glue that holds the house together. The Day’s have four sons,Clarence,Jr (Jimmy Lydon),John (Martin Milner) and the two youngest sons,Harlan and Whitney. The Days also employ a household staff and that Clarence continues to accidentally scare off the newest maid hired becomes a running gag in the movie. He is constantly seeing a new face and is forced to ask his wife who she is and what happened to the other maid.

There are several story lines in “Life In Father” that are dealt with grace,charm and Powell’s incredible dry wit. The two biggest plots lines finds Vinnie’s cousin Cora coming to stay with the family despite Clarence not really liking the idea of company. Cora is bringing a young woman,Mary (Elizabeth Taylor) as a traveling companion.
Of course Clarence,Jr. is smitten with Mary but has a perplexing problem,he has been handed down a suit of his father’s and its making him ACT like his father as well!

While the two young lovebirds talk,they discover that the senior Day has not been baptized and this throws Vinnie into a major panic,she insists Clarence get baptized but he refuses. This causes all sorts of headaches but when John Day,who is trying to become his “own man”,starts selling a quack’s medicine,it almost leads to disaster and the elder Day makes several promises that he doesn’t intend to keep. This doesn’t set well with Vinnie at all. She and the rest of the family conspire to make sure Clarence keep his word…or else!

This film was like a slow relaxing boat trip down a slowly drifting river. It’s a very charming movie that is very well acted. William Powell was 55 years old when he filmed “Life With Father” and he showed that he has lost none of his wit or humor. His Clarence is a boor and a bit of a puffed up buffoon but given the time where this story,based on a book and a play written by Clarence,Jr.,allows you to overlook his antics. It’s hard to LIKE the character as well because of the stiff neck of Clarence but after you meet Vinnie,you know who really is the heart and soul of the family. 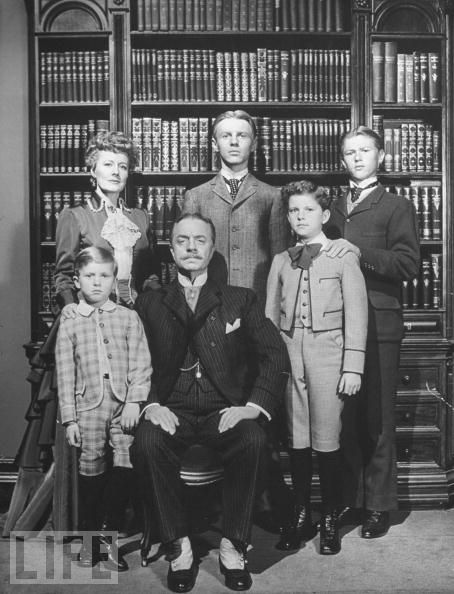 Irene Dunne was a lovely actress and quite skilled as well….she was nominated for five Oscars during her career. While she was 49 when “Life With Father” was released,she looks at least 15 years younger. I loved her take on Vinnie as she really does her husband despite himself.
Elizabeth Taylor was drop dead beautiful and because “Life With Father” was release by Warner Brothers in color,you can see how fetching her eyes were onscreen.
Jimmy Lydon,who played Clarence,Jr. had a long and remarkable career which included helping to create “M*A*S*H*” among other film,radio and TV projects.
Martin Milner went on to having a great career as well as he starred in two series that became TV classics,”Route 66″ and of course “Adam-12” where he played LAPD officer Pete Malloy.
Director Michael Curtiz of course is a legend in Hollywood as he has directed some of the famous and classic films ever made in America including “Casablanca”. He was nominated for “Life With Father” as well as it went on to become a very popular picture.
In a twist of fate,Warner Brothers lost the rights to “Life With Father” and it is now considered a “public domain” film which means anyone can release a copy but be aware that some copies are poorly rendered,the copy I have has a line down the middle of the screen for the last 7-8 minutes. Gad!!!

The cheetah and I both enjoyed this fine classic very much and we both give it a huge thumbs/paws straight up.Normally we just include a trailer but because the whole film can be seen for free on YouTube,we decided to provide a link to the film.